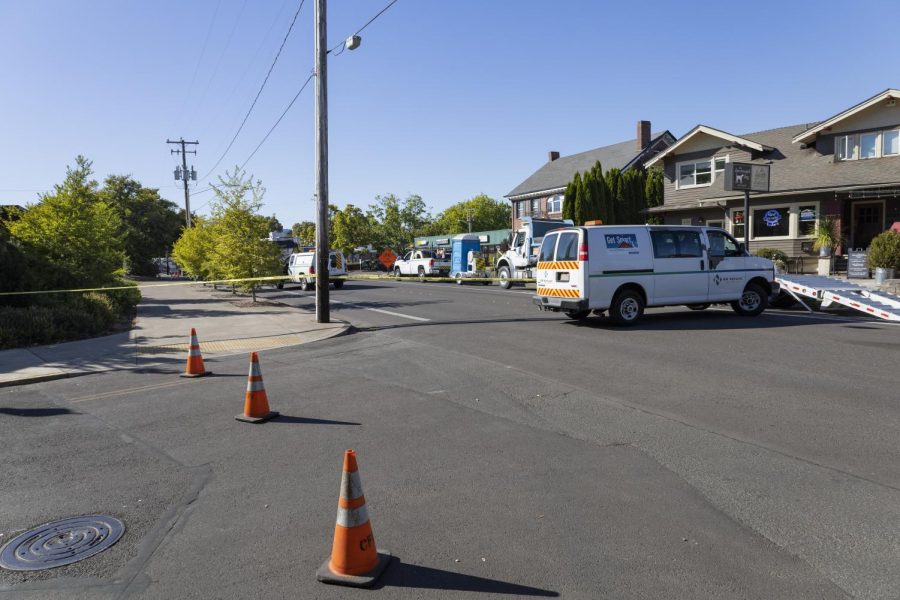 NW Monroe Avenue was blocked off Tuesday afternoon following a gas leak due to a natural gas line being struck accidentally during construction on the street. The gas line was shut off by 5:15 p.m. and officials say the street will be closed to through traffic until late Tuesday night.

An underground natural gas line near NW Monroe Avenue and NW 25th Street in Corvallis was punctured at about 3 p.m. on Tuesday while a construction company was conducting utility work.

After the natural gas line was punctured, Tony Woods, the battalion chief of the Corvallis Fire Department said the gas had vented out but also under the street.

“That’s been the part that we’ve been trying to track, is exactly where it went,” Woods said. “So that’s why we had to close businesses because it expanded and continued to expand.”

The natural gas leak occurred in the area on Monroe between Downward Dog and Chipotle Mexican grill and the road was closed off, stopping traffic from driving through.

Woods said the roads between 23rd and 26th as well as one block north and south of Monroe were all shut down. The area is expected to be shut down for most of the evening.

“[Opening it] is up to Northwest Natural as well as the OSU police department for the safety of everybody involved and repairing the leak itself and then making sure we don’t have additional leaks and it’s safe for people to reenter,” Woods said.

According to Shanon Anderson, the associate vice president of Public Safety and chief of OSU Police, these buildings are expected to stay closed for the rest of the business day and reopen tomorrow, on Sept. 15.

“We’ve been monitoring the area,” Anderson said. “We had the parking lot shut down briefly while there was a lot of the gas odor in the area, but then we’ve been able to safely open that and allow people to get out with their cars.”

The gas was shut off at about 5:15 p.m. and a recent email from OSU said the repair of the road and the pipe will continue into the night with Monroe being expected to be open to traffic by Wednesday.

According to Woods, no one was injured or hurt in Tuesday’s gas leak.

Woods said the gas leak on Monroe also had nothing to do with the recent Sept. 8 incident at Weniger Hall in which an odor of natural gas was reported. There was no gas leak confirmed at Weniger Hall.