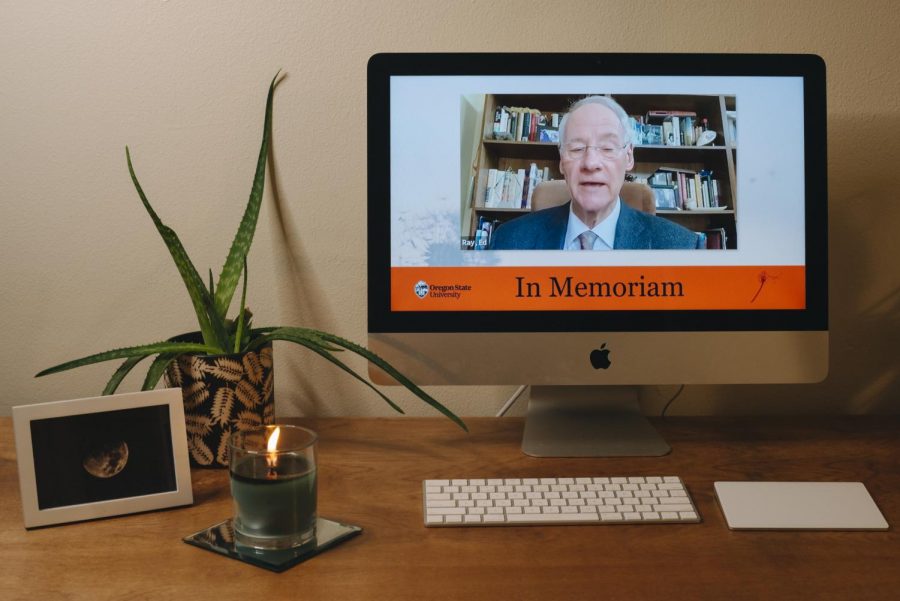 President Emeritus Ed Ray addresses the OSU students, alumni, and parents via Zoom for In Memoriam. The OSU In Memoriam was delivered remotely this year featuring several speakers, musicians, and a poet.

Clarification: The original headline read “’In Memoriam’ service honors COVID-19 deaths in OSU community.” COVID-19 has since been removed from the headline to better reflect the In Memoriam event, as it honors the deaths in the university community before and during the pandemic. The first paragraph has also been edited for the same reasons.

In Memoriam, a virtual event put together by Oregon State University, honored the colleagues, students, staff, friends and alumni of OSU who have died and aims to have a lasting impact and significance on the community.

The memoriam, held on Jan. 28, 2021, was planned by Jon Dorbolo, associate director of academic technology, and others in the committee included a Native American Flute performance from Jan Michael Looking Wolf and a poetry reading from Morgan Corona.

Robynn Pease, Assistant Director of the Family Resource Center, said the idea for this memoriam came in response to the expressed need for students, faculty and staff to formally grieve the passing of colleagues and friends who had died during the previous academic year.  Dorbolo met with former OSU President Ed Ray frequently to brainstorm about the event and the efforts that were put into it.

“When you think about OSU as a community and the collegiality that occurs between people who spend so much of their career together, the passing of a co-worker or colleague feels like losing a family member, and it is really hard sometimes to mourn their loss. We wanted to create a formal way to help our folks acknowledge their grief,” Pease said.

Tessie Webster-Henry, mental health promotion coordinator at Counseling and Psychological Services, said this event to memorialize those who died was created with an expectation to be continued in future years. The planning for this took two years to figure out the process of it with high-level stakeholders. This included communicating with a department of human resources to ensure the memoriam occurs every year and getting the proper funding for it.

“I think we’re in a really good position to do it,” Webster-Henry said. “It was really well received, this first one, and I think that definitely it will continue year after year, that’s our hope. Our hope is that in the future, people will think this has always existed at OSU because it’s such a part of our community.”

Aubrie Piper, director of student care at the office of dean of student care, works directly with the families who were affected and stays in touch with them during the mourning time for that student and beyond that period. She said these families feel as much of a part of OSU because their student was and that was some of the last memories they have of them.

“Continuing to honor that I think we got to see some real value, love and support from families to see that their student was remembered even if it has been a year or so from now,” Piper said.

In response to the memoriam, the committee has received comments of gratitude and a sense of value with how important and meaningful the event was.

A recording of the hour-long event is not currently available for viewing, but the committee plans to release it in the future.

“When I first heard about this I was struck by, ‘yeah, it’s about time,’” said Eric Gleske, television production director in academic technology. “It’s nice that this can happen. It’s not just the faculty, it’s not just the alums. It’s our volunteers and everyone else.”

A grief counselor was available during and after the event as a mental health resource. For further support, students can visit CAPS remotely among other resources provided by OSU.