After dazzling the crowds in Tokyo, Carey hopes to impress OSU gymnastic fans and the world 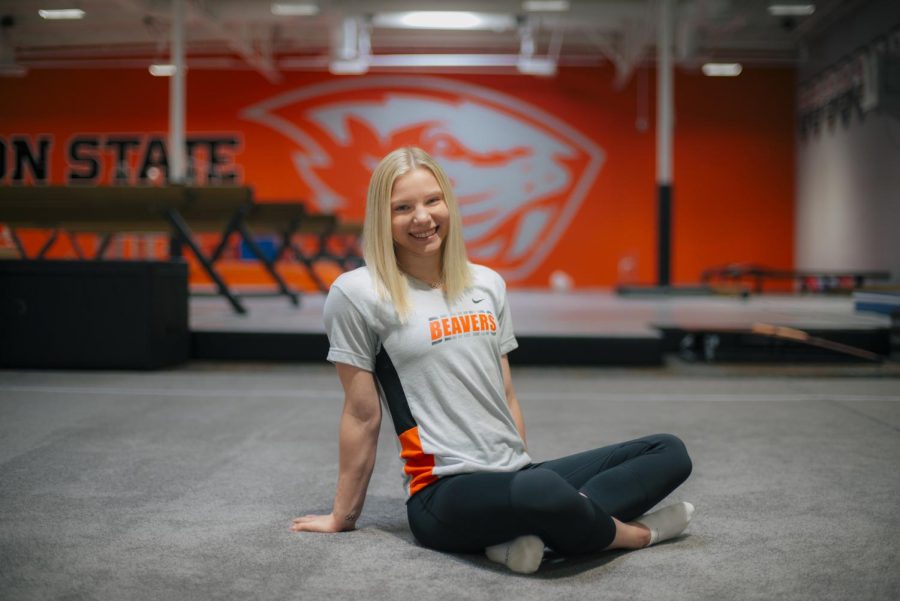 2020 Olympic gold medalist, Jade Carey, hosted a media event at the new OSU gymnastics practice facility on Sept. 10. Carey is beginning her freshman year as a Kinesiology major and looks forward to continuing her gymnastics career as a Beaver.

Since the Tokyo Olympics have come to a close, beaver gymnast Jade Carey has set her sights on getting ready to bring her unique skills to collegiate gymnastics.

The 21-year-old elite gymnast, Olympic gold medalist and now newest member of the Oregon State University Gymnastics team brings an exciting potential and a unique set of skills to the collegiate scene.

Carey, who originally signed her national letter of intent to attend Oregon State back in Sept 2017, had been a lock for the women’s competition as an individual competitor rep- resenting the United States long before the Olympic trials that took place in June.

Prior to the Olympic Games, Carey had competed in several different world and domestic gymnastics championship tournaments. In 2017, Carey took home the silver medal in the vault and floor exercise at the 2017 World Artistic Gymnastics Championships in Montreal, Quebec, Canada. And at the 2018 U.S. Gymnastics Championships in Boston, Mass, Carey was a silver medalist in the floor exercise, and captured bronze in the vault event.

In 2019, at that year’s World Artistic Gymnastics Championships in Stuttgart, Germany, Team USA had the most amount of points in the tournament, adding another gold medal to Carey’s already impressive resume. She was also able to bring home the silver medal in the vault event at that same championship.

And in the 2019 U.S. Gymnastics Championships in Kansas City, Mo., Carey secured two more silver medals, finishing as the runner up in both the vault and the floor exercise.

However, because of the COVID-19 pandemic, the Olympics were pushed back until the summer of 2021. But nonetheless, the goal was still the same for Carey: Olympic Gold.

Fast forward one year later, in Tokyo, Carey proved to be a powerhouse for the United States, competing in both the vault and floor exercise finals.

“Winning floor at the Olympics felt like everything I have ever dreamed of. All the hard work has finally paid off,” Carey said.

The Olympics, however, sometimes cause a lot of athletes to put a large amount of pressure on themselves. Athletes also face a variety of adversity, whether it be before, during, or after the Olympic Games.

Carey faced some difficulty during the event that she was most favored to take home gold in, the vault event.

“I tripped during the run of my first vault and couldn’t do the vault I was supposed to. In that moment, I knew my chances at a medal were over. It was very difficult but I walked back and completed my second vault,” Carey said. “I cried, hugged my dad and he told me that I could turn the worst day of my life into the best day tomorrow.”

Despite the disappointment of her performance in the vault finals, turning the worst into the best is exactly what Carey did.

The quick turnaround from the vault routine to the floor exercise, while difficult, is what led to Carey earning the coveted title of Olympic gold medalist.

Carey is capable of performing outstanding and difficult skills on the floor exercise, as seen in her worldwide performance, but also behind the scenes. Carey had tinkered with ideas of new and never done before skills many times before, one of which she competed in championships earlier in the season.

The skill is a layed out double salto with three complete twists. In other terms, Carey flips in the air two times while simultaneously making three full – 360 degree rotations with her body in a straight position before coming back into contact with the floor.

Although Carey did not perform this specific skill on the Olympic stage, the ability and drive to perform the skill holds promise and excitement for the variety of high level difficulty she could bring to the collegiate platform.

“I have always played around with big skills off of the trampoline [and] into the foam pit and this one just seemed realistic for me,” Carey said.

But performing a big skill like that is not easy. Most gymnasts spend several months, sometimes even years practicing and perfecting a certain skill, or sometimes multiple skills. But this didn’t intimidate Carey.

She dedicated a good chunk of her time to practice and really honed in on those skills.

When she felt like the time was right, she submitted her skill to the Federation of International Gymnastics [FIG] to see where they would rank those skills. Carey was surprised with the level her skill received.

“We worked it step by step really hard until it was finally ready to do,” Carey said. “When we submitted the skill to the FIG, they said they would value it at the K level, which would be the highest level of difficulty skill in the book.”

Since these skills have helped her compete at world championships and win an Olympic Gold Medal, Carey is excited to see how those skills will fair on the collegiate gymnastics scene.

The transition to collegiate gymnastics can be daunting for some gymnasts, but Carey is ready for the change, mainly due to the fact that she has already competed on some of the world’s biggest stages.

Although Carey’s skills on the floor exercise have already shown their strength, she also proved her less often discussed strength in the all around event, which is where a gymnast competes in all of the vault, uneven bars, balance beam and floor exercise events in a single gymnastics meet.

This ability showed when she stepped into the all around com- petition for Simone Biles and placed eighth out of 24 of some of the best competitors in the world who qualified for the most sought after title in women’s Olympic gymnastics.

This all around ability comes as a huge asset to the Oregon State Gymnastic team which looks for- ward to a strong season, especially coming out of a year followed by the shortened 2021 season due to the pandemic.

When asked why she chose OSU, Carey said, “I honestly love everything about Oregon State. The gymnastics coaching staff is amazing and the campus is beautiful. I am most looking forward to having that team environment. I’m so excited to be a part of such a special group of girls.”

Not only do the Beavers welcome an Olympian to their team this year, but also begin training in their brand new facilities, retiring the Gladys Valley gymnastic center on OSU’s Corvallis campus, and moving to the new practice facility, located on 4100 SW Research Way in Corvallis, OR.

Beaver nation waits to see what Carey’s innovation within the sport of gymnastics, her perseverance and dedication, and what the rest of Beaver gymnastics will do in the upcoming season.