Beavers get their first road victory against the Trojans since 1960. 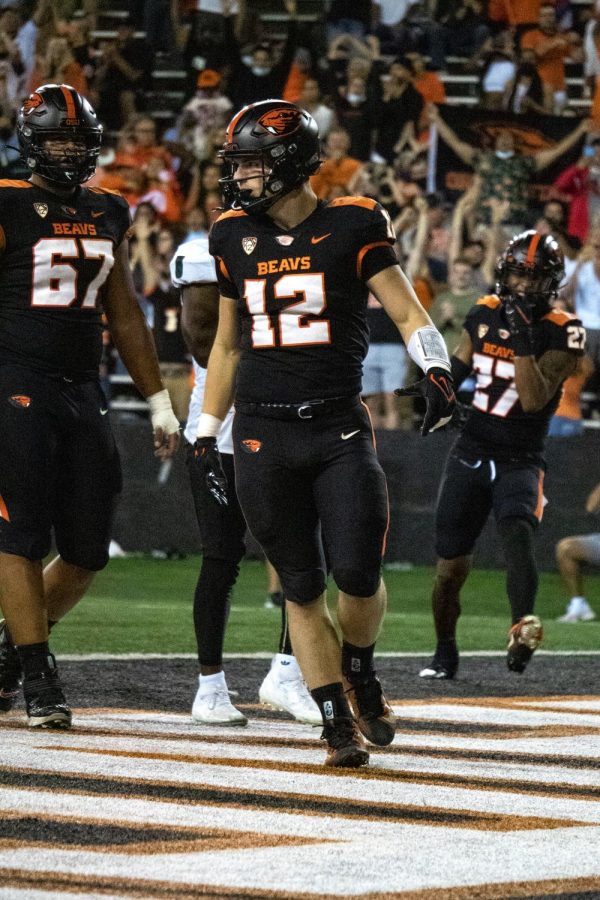 Redshirt-junior inside linebacker Jack Colletto pictured in the endzone against the Hawaii Rainbow Warriors. Against the Trojans, Colletto scored 2 rushing touchdowns, and 1 interceptions to help the Beavers defeat the Trojans, 45-27

For the first time since 2014, the Oregon State football team has a three-game winning streak, as the Beavers defeated the University of Southern California Trojans by a score of 45-27.

This was the only first on the night, however. The Beavers also earned their first road victory over the Trojans since 1960, ending the long drought without a win in Los Angeles.

“Let’s face it, you ain’t win in a place in a long time and you do, it’s great for them [Oregon State],” said head football coach Jonathan Smith.

When smith was asked what this win means to his team, he said, “I think it shows growth. It’s another step in the direction we’re trying to go, to win on the road against good teams.”

Oregon State (3-1, 1-0 Pac-12) announced themselves in a big way to the conference, with USC being announced as the 13-point favorite the week before. This still didn’t intimidate the Beavers, however.

The OSU defense was making the plays needed to stop any momentum that the USC Trojans could have been building up. In total, Oregon State recorded 65 total tackles, and 29 tackles for loss. Redshirt-junior inside linebacker Jack Colletto, redshirt-sophomore defensive back Alton Julian, and junior defensive back Rezjohn Wright were all able to record interceptions for the Beavers.

The OSU offense were able picking apart the Trojan defense, generating big plays and scoring points on nearly every drive. Redshirt-sophomore quarterback Chance Nolan was 15-19, throwing for 213 yards, 4 touchdowns, and 2 interceptions. Redshirt-junior running back B.J. Baylor had 23 carries and rushed for 158 yards.

For the Beavers, the bigger battle in the game was the one with the refs, fighting penalty calls throughout the entirety of the first half. Throughout the game, the Beavers were flagged 14 times, giving up 154 offensive yards because of it. But this didn’t stop the Beavers from accumulating 535 yards of total offense.

Oregon State’s roster has a plethora of Southern California natives, and it cannot be stressed how important and sentimental this win was for those players, largely for redshirt-junior wide receiver Tyjon Lindsey.

“It means the world to me. I literally dreamed this, it just hits different when you get that win back at home,” said Lindsey when asked about how it feels to capture the win in his hometown. “We put the city [Corvallis] on the map.”

As mentioned earlier, while the Beaver offense was constantly firing off of all cylinders, the defense for the Beavers was able to tally up 4 total takeaways, which is a season-high for OSU.

Junior cornerback Rejzohn Wright was everywhere on the field, making tackles, pass breakups, and interceptions. His energy alongside with redshirt-junior cornerback Jaydon Grant was overwhelming for USC’s quarterback and receivers, stopping them from getting any type of rhythm going.

Looking forward, the Beavers do not want to let their foot off the brake. The message is clear for the future and Chance Nolan had something to say about what this win means for the team.

“We’re not done here,” Nolan said. “This is a good win for us. We’re gonna enjoy this one with our guys, but come Sunday, we’re back to work.”

Although this is the almost perfect start to the season that the Beavers were hoping for, they are aware that there is more to improve upon for the rest of conference play.

“I guarantee you we’re gonna look like a way better team next week,” Lindsey said. “So, tune in.”