Soccer programs upset No. 7 and No. 23 ranked teams on the same night 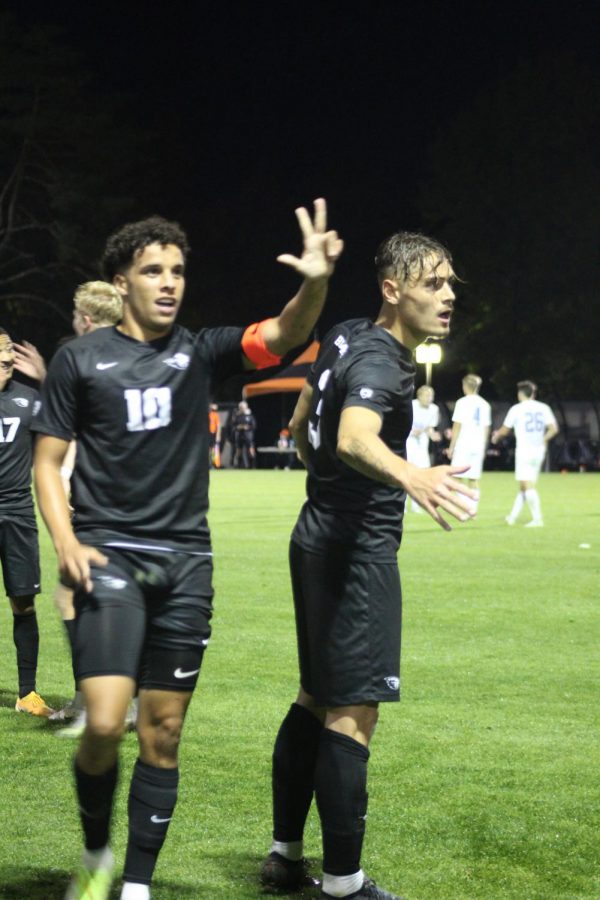 Junior midfielder Sofiane Djeffal, (left), and junior defender Gael Gibert signal to nearby teammates after they scored the final point that put them in the lead against UCLA at Thursday night's game.

Both the Oregon State men’s soccer and women’s soccer team played on the same night against ranked opponents. And both teams were able to walk away with a victory.

The Oregon State women’s soccer team had a historic night for the program, as they defeated the No.7 ranked Stanford Cardinal in Palo Alto by a score of 2-1. This victory was the first road win against the Cardinal in program history, and the win moved the Beavers to an overall record of 9-1, and 1-1 in conference play.

Freshman forward Aaliyah Bluett scored her first collegiate goal, scoring at the 42 minute mark. And at the 74 minute mark, senior midfielder Laura Galceran was able to assist junior forward Sophie Conrad, and Conrad was able to score for the Beavers.

Head women’s soccer coach Lauren Sinacola was pleased with her team’s performance, but is ready to move on to the team’s next matchup, the California Golden Bears in Berkeley, California on October 3.

“The team was focused on the job at hand and did what we needed to do to come out with a win,” Sinacola said. “We had a lot of players step up tonight and to say I’m proud is an understatement. We will enjoy this win, learn from it, and refocus for our Sunday matchup against Cal.”

Meanwhile in Corvallis, the Oregon State men’s soccer team had a tough task ahead of them, facing off against the No.23 ranked UCLA Bruins.

At the 64 minute mark, redshirt-senior Tyrone Mondi scored a goal for the Beavers, cutting the Bruins lead to one. At the 66 minute mark, Molina-Diaz would score his second goal of the match, leveling out the game at three goals a piece. And at the 67 minute mark, junior midfielder Sofiane Djeffal would score for the Beavers off a deflection from the Bruin goalkeeper, and would give the Beavers the lead. This game solidified the win and the upset for the team.

This win put the men’s soccer team with an overall record of 5-1-1, and with a conference record of 1-0-0. Head soccer coach Terry Boss said that he was proud of his team for fighting all the way through, and not giving up.

“I thought in the first half they played really well, just didn’t do what we needed to in the critical moments,” Boss said. “But this group never gave up – they continued to do what we asked and they never stopped playing. The resiliency, the fight, the collectiveness, I couldn’t be more proud of this group.”

The men’s soccer team will look to carry this momentum into their next game against the San Diego State Aztecs on Oct. 3.