Volleyball falls to No. 17 Stanford at first home game with fans since 2019 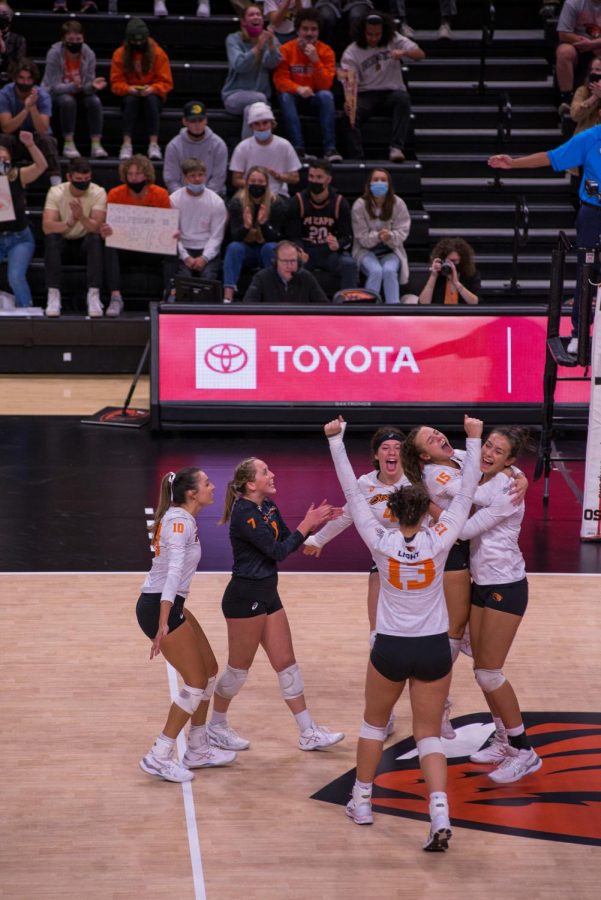 The OSU women's volleyball team celebrating after scoring a point against the No. 17 Stanford Cardinals on October 8. The Beavers would fall to the Cardinals, losing 3-0.

Over 1100 people came to cheer on for the Beavers, who have had a rather rough start to their season, not having won a set in their previous six games.

Fans roared to cheer on their Beavers, bringing the energy that most athletes crave. Starting the first set, senior outside hitter Maddie Goings was able to score off the serve for an exciting start. The Cardinals were rather aggressive and attacked well, leading to them win the first set, 16-25.

Set two was more promising. The Beavers were down 8-15 at one point but rallied back to within striking distance. They eventually lost the set at a close 20-25.

Set three went in favor of the cardinals. While the Beavers started strong but quickly fell behind, losing this set 12-25.

Goings led the team with 9 kills off 33 attacks, followed by freshman outside hitter Vivian Light with 6 of her own kills off 22 attacks. Senior libero Grace Massey led the Beavers in digs at 14.

Now with a record of 2-13, the beavers will take on the California Golden Bears on October 10 at noon in Gill Coliseum, as they continue at home for their next 3 games.