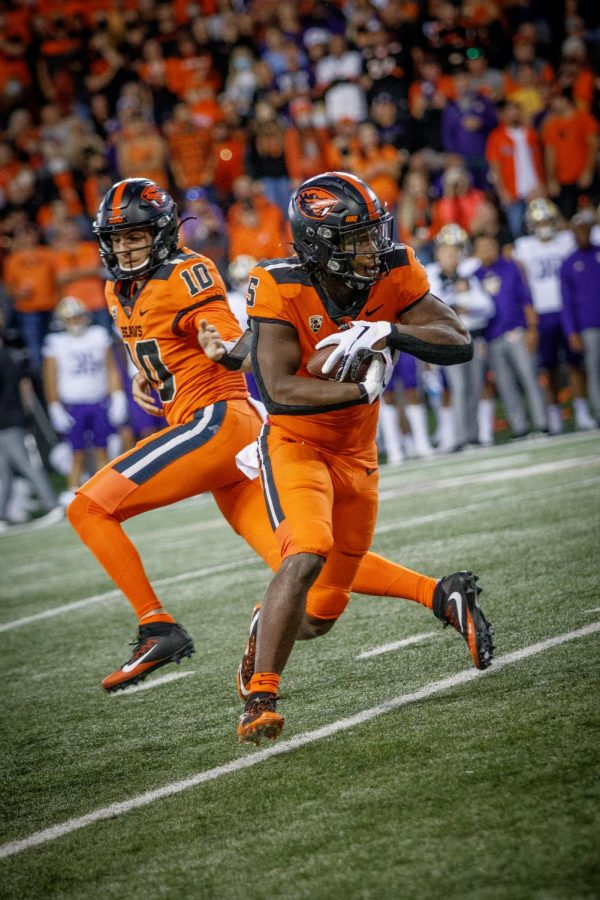 The Oregon State Beavers suffered their first conference defeat of the season on Saturday when they lost 31-24 in a hard-fought game in Pullman, Washington.

An explosive running game was not enough to carry the Beavers to victory as it did last week against the University of Washington.  Despite rushing for 309 yards and three touchdowns as a team, Oregon State’s passing game never got into a rhythm.  Redshirt-sophomore quarterback Chance Nolan finished just 11/25 through the air for 157 yards and two interceptions.

The Beavers got off to a strong start in this game, especially on the defensive side of the ball.  With a 10-3 lead late in the second quarter, Oregon State’s defense came up with two huge red zone stops to maintain their seven-point lead going into halftime.

In the third quarter, however, the Beavers came out flat on both sides of the ball.  After forcing a three-and-out, Washington State’s offense marched down the field with a seven-play, fifty-yard drive that ended with a touchdown run by Cougar running back Max Borghi.

The Beavers didn’t trail for long, however.  With less than a minute to play in the third quarter, Oregon State’s offense responded with a two-play drive that was set up by a 50-yard run from redshirt-junior running back BJ Baylor.  Redshirt-sophomore running back Deshaun Fenwick finished the job with a fifteen-yard touchdown run off a tailback pitch on the next play.

After Washington State retook the lead less than two minutes into the fourth quarter, Oregon State again responded with a run-exclusive drive.  The Beavers went 50 yards on five plays and tied the game with an 11-yard Deshaun Fenwick run with 11:15 to play in the fourth quarter.

Despite being able to respond on two straight possessions offensively, the Beaver defense simply couldn’t get off the field.  Facing a third down and 12, Washington State dumped it off to running back Deon Mcintosh on a bubble screen that went for sixteen yards.  The Cougars found the end zone with a one-yard touchdown pass a few minutes later.

On their final drive of the game, Oregon State was able to move the ball 75 yards, with Nolan completing first down receptions to redshirt-senior wide receiver Trevon Bradford and redshirt-junior wide receiver Champ Flemings.  But in the end, Washington State’s defense was to get the stop that they needed when redshirt-sophomore running back Trey Lowe came up a yard short of the sticks on a desperation 4th and 18 screen pass with 30 seconds left.

Perhaps the biggest factor in Saturday’s loss was Oregon State’s defensive play.  After scoring just three points over the first two quarters, Washington State scored touchdowns on all four of their second half drives and piled up 491 yards of total offense.

“We’ve got to tackle better,” said Oregon State head coach Jonathan Smith.  “Our man coverage has to be better.  Some of those explosive plays in their pass game were in man.”

“We’ve got to find better balance than we’ve got,” said Smith.  “The consistency to be a true threat throwing it and being explosive with it.”

Despite the setback of a tough loss, the Beavers know there are still six games ahead of them, and that they are a team with a lot of potential.

The Beavers will have a bye this coming weekend, sitting with a 4-2 record (2-1 in conference) before facing the Utah Utes on October 24th at Reser Stadium.  The Utes currently hold a 3-2 record (2-0 in conference).