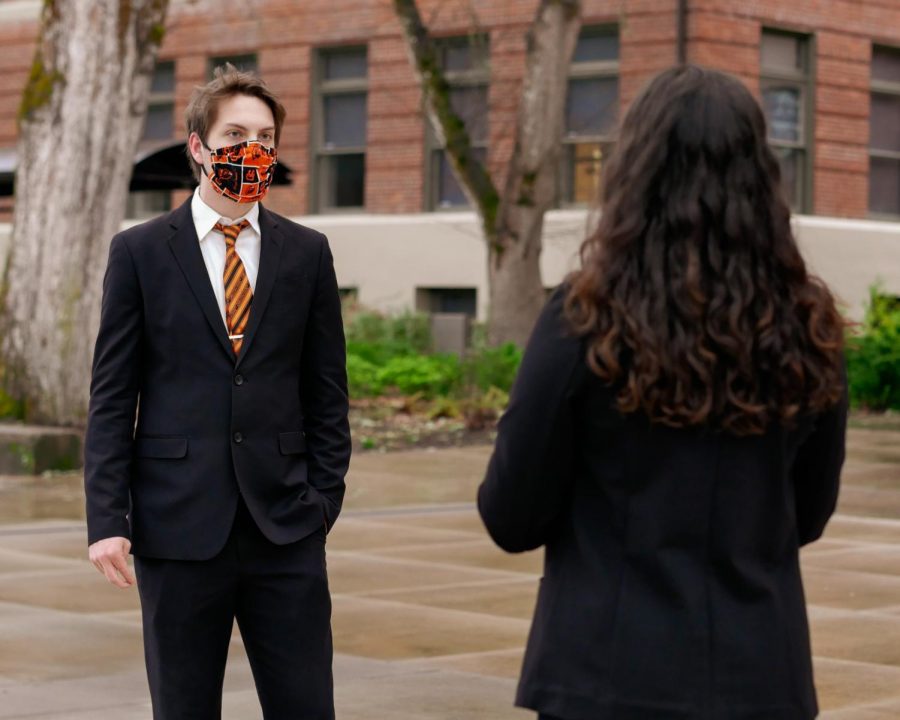 ASOSU President and Vice President candidates Alexander Rudolf Kerner, left, and Stella Harkness, right, posed distanced and in discussion in front of the Student Experience Center. The two candidates had been taken off and put back on the ASOSU ballot twice due to eligibility issues.

Associated Students of Oregon State University president and vice president ticket Alexander Kerner and Stella Harkness were disqualified from the 2021 election then allowed to re-enter after appealing.

Kerner and Harkness were found to be ineligible for candidacy by the ASOSU elections committee after Kerner did not pass an initial conduct check, something that is required for all students running for a student government position.

The ticket was initially disqualified by the elections committee on Tuesday, Feb. 9 and allowed to re-enter the election by Friday of that week after further information was provided and reviewed by the committee.

“The candidate had a conflict that arose related to their eligibility,” the elections committee said. “The committee again receives credible information and makes very challenging and difficult decisions based on our ASOSU statutes, constitutions and elections packet.”

In order to be eligible to run, all undergraduate students are required to have earned at least six hours of credit in their most recently completed term, be currently registered for at least six credit hours, not be on conduct probation and have a minimum cumulative grade point average of 2.00.

Kerner said he was in poor standing with the university due to having a student help him with Engineering 112 assignments. When it was brought up to him by the elections committee, he scheduled a meeting with the Student Conduct & Community Standards within 24 hours and got the case closed.

“COVID-19 hit and I wasn’t getting enough aid from the teaching assistants and teachers so I asked a student for help which wasn’t allowed,” Kerner said.

Kerner said his appeal was due to the slow processing of students from SCCS and he was not able to get his case closed in time to be put in good standing with the university.

However, upon reviewing the appeal, the elections committee found out that the type of violation technically did not disqualify him. This was because he was not on probation due to how minor the infraction was.

The Kerner-Harkness ticket was disqualified then reinstated twice. The ticket had two separate meetings to talk about the situations; the first time they got disqualified was due to Kerner being in bad standing with the university. The second time, there was miscom- munication on how he handled the situation, after they were reinstated.

The president and vice president race is a joint ticket, therefore, when one candidate fails to be eligible, both are disqualified.

“It has been a lot more stressful than I thought it would be,” Kerner said. “Above all else, this was a major learning experience in which I learned what and how to run a smooth campaign.”

It was concluded that the Kerner-Harkness ticket would remain in the election and run against Patel-Perfect.

The elections committee made decisions about the Kerner-Harkness ticket based on the information provided at the moment while at the same time executing the proper rules.

As more information was provided to the committee, better policy understanding was given. The appeal made by the candidate demonstrated that the cause for disqualification was unjust and was made without key contextual factors. The committee examined the justification for the appeal and was provided further context of the situation regarding the Kerner-Harkness ticket.

ASOSU Speaker of the House Chase Pettibone said the reasons for the issues in this election season are because of the chal– lenges presented by COVID-19. The elections committee has been working remotely during this process which led to miscommunication between the committee, advisors and university employees.

“This is also the first time the elections have been all remote and trying to keep fairness for all candidates is a different process when it is remote and having everyone on the same page,” Pettibone said.

The virtual environment has contributed to the challenges that appeared this year, according to Pettibone. He said the elections commit- tee has been working hard behind the scenes to navigate newfound issues and address them as efficiently and effectively as possible.

“After consulting with the Judicial Council and the ASOSU advisory team, the elections committee, in good faith, reinstated the Kerner-Harkness campaign,” Pettibone said.

The elections committee made note of the challenges that have been presented in the election cycle. Pettibone said the committee handled a stressful crisis mitigation the best way possible under the circumstances. Pettibone said they look forward to implementing new ways to address challenging situations with how there is always room for improvement.

“We don’t consider these missteps, rather they are learning opportunities that are a part of the student experience,” Pettibone said. “So far it’s been a successful elections process and we have fantastic candidates eager to advocate for our students.”