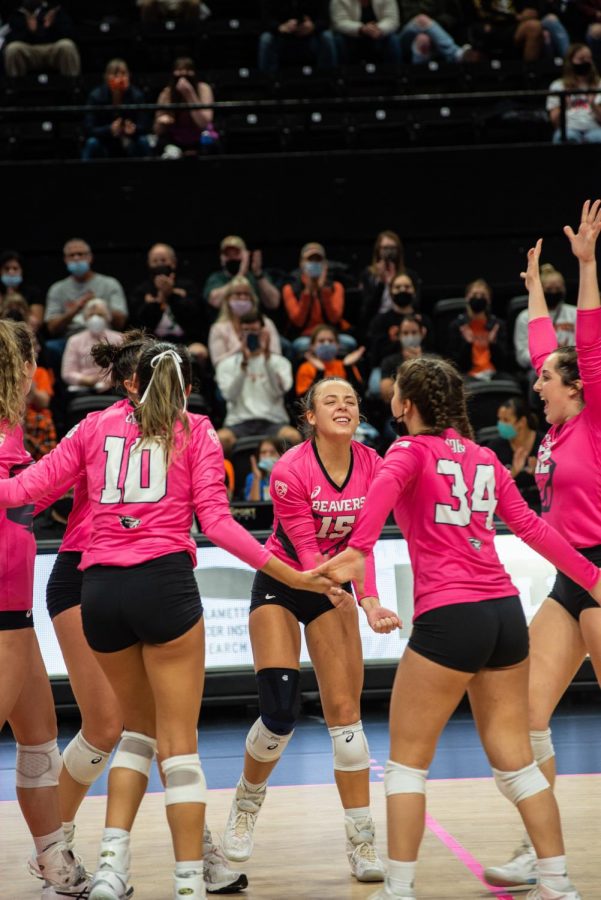 The OSU volleyball team celebrates after scoring a point in the game versus the Washington State Cougars on Oct. 15. The Beavers would go on to lose the game, 0-3.

The Oregon State women’s volleyball team opened the weekend after coming off their first Pac-12 win, this time facing off against the No. 25 ranked Washington State Cougars.

After putting an end to their seven-game losing streak last weekend, the Beavers were eager to have their momentum continue. The first set was energetic and competitive right off the bat. Washington State led most of the set, but the Beavers got within striking distance at the end, narrowing the score to 21-22. The Beavers eventually lost the first set, 21-25.

Sets two and three were similar for the Beavers, who were able to stay competitive and keep the matches close. However, they would lose set two by a score of 19-25 and set three by a score of 18-25. With the Beavers losing 0-3 against the Cougars, OSU now has an overall record of 3-14, and a 1-6 conference record.

Despite the loss, the individuals on the team shined in their own unique ways.

Senior outside hitter Maddie Goings led the team in kills at 14 off 43 attacks as well as four digs and two blocks. Goings now has 1,186 career kills and 3,670 career attacks after the matchup with the Cougars. She now sits sixth on OSU’s career list for attacks.

Senior libero Grace Massey led the team in 14 kills, four digs, and two blocks. Massey moved to 1,984 career digs following the matchup and is now only 46 digs away from an OSU career record.

Oregon State wraps up their four-match home streak on Sunday against the No. 10 Washington Huskies at noon in Gill Coliseum.