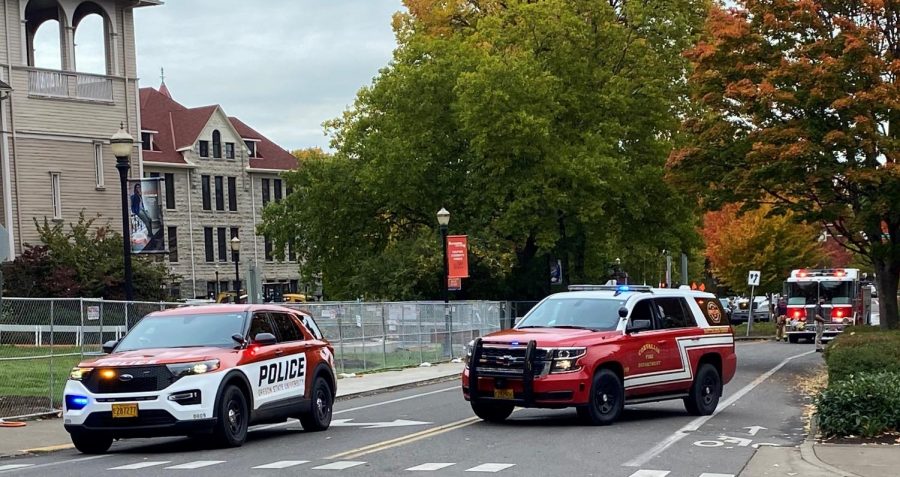 Traffic on SW Jefferson Way was blocked off after a natural gas line was punctured at the Pharmacy Building on Wednesday at about 2:45 p.m. Buildings in the area were evacuated and the road remained closed until the gas line was capped at about 3:20 p.m.

A gas line near the Pharmacy Building on the Oregon State University campus was punctured at about 2:45 p.m. on Wednesday, which shut down the buildings in the area.

According to David Sweeney, the lieutenant with the Oregon State University police department,  workers had been working on the old gas lines that were directly south of the Pharmacy Building.

“They nicked one of the lines which then released the gas,” Sweeney said. “And then we started getting emergency calls so we formulated our action plan here to close down traffic and make sure to keep people out of the area until they could cap the line.”

The Pharmacy Building, Valley Library, Gladys Valley Gymnastics Center and Furman Hall were all closed down and evacuated. Sweeney said there had been students in classes when they evacuated the buildings. SW Jefferson Way was also shut down to keep traffic away from the area.

OSU sent out an initial alert about the gas leak at 2:37 p.m. to warn students of the danger. An updated email was sent out shortly after and a final email informing students the emergency had ended was sent out at about 3:22 p.m. after the situation wrapped up.

“We worked with our partners from the fire department as well as OSU environmental health and safety to make sure that the buildings are all safe—but the line is capped—[and] that there’s no danger to the community,” Sweeney said.

According to Sweeney, after the gas line had been capped, they went through the buildings with sensors to detect the presence of natural gas and make sure the gas no longer posed any danger.

Wednesday’s gas leak, however, has no relation to another gas leak that occurred on NW Monroe Avenue in early September, nor the unconfirmed gas leak that happened at Weniger Hall around the same time.