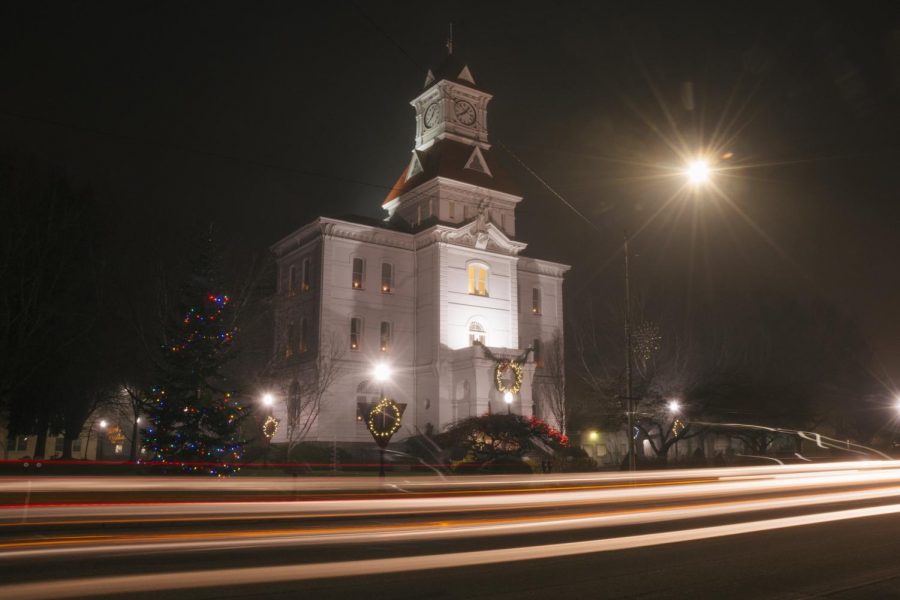 A long exposure of the Benton County Courthouse. With a brand new police chief and the on going coronavirus response, Corvallis citizens are anxious to know what lies ahead.

With the winter season approaching, Benton County government and health officials plan to take initiatives to keep residents in the community safe, despite projected increases in COVID-19 cases.

COVID-19 cases have been surging throughout Oregon with the rise in cases since late October. These statistics from the Oregon Health Authority show that an increase will also hold true for the metrics in Benton County. The increase that took place the past few months showed a jump in confirmed cases since October with 108 cases the week of Nov. 28, 2020 and 169 cases the week of Dec. 6, 2020 making those numbers the highest of that month.

“The amount of new cases here in Benton County has put the County into the ‘Extreme Risk’ category of Oregon’s Risk and Protection Framework for at least the next two weeks,” said Alyssa Rash, Benton County public information officer.

On Dec. 3, all 36 Oregon counties were given a risk level based on the COVID-19 data every two weeks, which affects the extent of how much that county can reopen. Risk level is determined by the rate of COVID-19 cases per 100,000 people, the number of COVID-19 cases and the test positivity rate over 14 days. Counties are placed into the highest risk category even if one or two of their categories are at lower levels than the highest one.

With the increase in cases throughout the county, there are rules and regulations that have been placed onto the community to follow in order to stay safe. These rules affect how the county follows social distancing guidelines, being that social gatherings are limited to six people from no more than two households. Stores and businesses that are open and operating have a limit of 50% capacity that can be present at one time.

“Even the best plans for limiting the spread of illness are contingent on social behavior,” said Rash. “The most predictable aspect of whether or not case counts rise or lower is social interactions.”

City of Corvallis Mayor, Biff Traber, said the city is promoting recommended guidelines by public health professionals to be followed in businesses, restaurants and public spaces. These procedures include what Traber considers the three Ws: wear a mask, watch social distance and wash your hands regularly.

Rash reiterated similar guidelines to follow for community members such as washing your hands and wearing a face covering when around other people.

She also encouraged people to seek mental health support due to how winter can be a difficult time of year, even without the stress and isolation brought on by COVID-19. Drew Silverman, clinical director of Acme Counseling, said there are different ways to cope with the pandemic along with the winter season such as getting outside and talking to family and friends.

“That catchphrase ‘we’re all in this together’ is actually true and one of the things I find, because we’re doing counseling, is that a lot of people don’t realize that everybody else feels the same way,” Silverman said. “It’s a stressful time and I think a big way to cope with it is just talking to other people… Getting out even though it’s rainy and cold, I think just getting outside and looking at birds and trees is pretty positive.”

Silverman said that good tactics to stay positive during the winter months is to get more vitamin D. Having Zoom calls with friends is another method he offered, as it is a good way to connect and also see each other.

“These restrictions aren’t forever, but they last longer when we don’t have everyone following them,” Rash said.