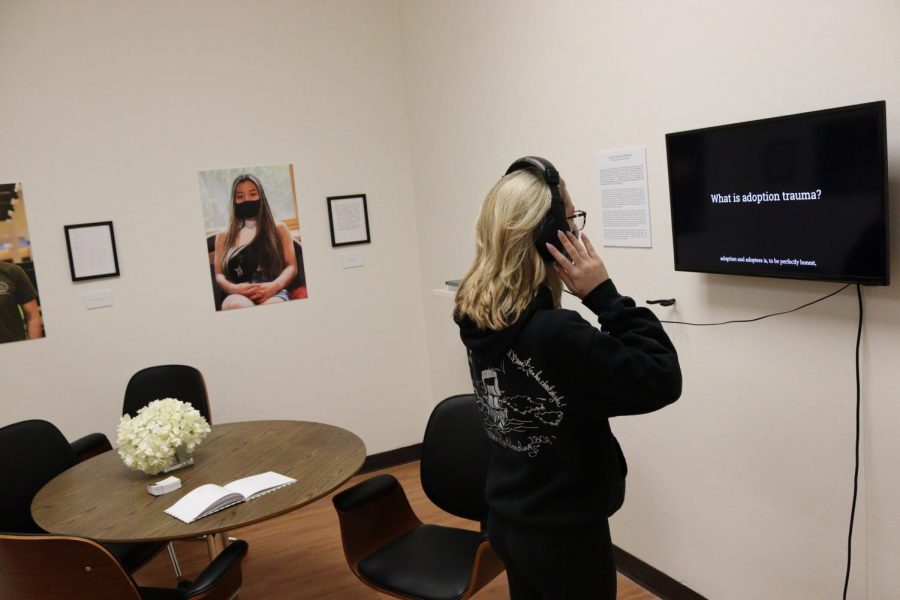 Gwendolyn Mitchell visited The Little Gallery at Kidder Hall on Oct. 19. On Nov. 1, the Universal Languages exhibition will open for the community to learn about language and its objective value.

A new art exhibit is coming to the Little Gallery inside Kidder Hall at Oregon State University from Nov. 1 to Dec. 17 that will represent the universal aspects of humans.

The exhibition, which is called “Universal Languages—Paint, Print and Photography,” will be open to visitors Monday through Friday from 8 to 5 p.m. starting Nov. 1.

The Little Gallery, which is part of the School of Languages, Culture and Society at OSU, features work from Dick Evans, senior international business advisor and director of various companies, and Gretchen Evans, who has been an artist for over 50 years.

Helen Wilhelm, director of the Little Gallery, reached out to the Evans before the COVID-19 pandemic.

“She had learned about our respective endeavors in art from Ed Ray, former president of OSU,” Dick Evans said.

Wilhelm said she wanted to celebrate the art produced by the two artists. The exhibition is a combination of photographs from around the world by Dick Evans and prints and paintings provided by Gretchen Evans.

“The photos show the harmony and mutualities of the world through portraitures, against the background of cultures and locales around the world,” Wilhelm said. “The monoprints convey a magical approach to composition and color. And the nudes offer interest in the universality of the human form.”

While married, Dick and Gretchen Evans have traveled around the world cultivating their love for art. The images in the art gallery are but a small portion of the overall collection the Evans have.

“Two of my favorites in the exhibition are ‘Angel and Devil’ of two young girls who wanted their pictures taken in Jaipur, India and ‘The Truck Driver’ of an ex-military army six-wheel transport driver who drove us into a remote mine site in Siberia,” Dick Evans said.

Wilhelm finds the photos, monoprints and nudes in the gallery culturally significant.

“Together, the exhibition celebrates our world of many cultures and the universal aspects of the human experience,” said Wilhelm.

Dick Evans’ favorite pieces of artwork in the exhibition were selected by his wife. Dick and Gretchen Evans hope to cultivate an appreciation of the commonality of humankind through their work.

“Photography—and especially spontaneous portraiture—can capture universal human emotions of joy, pain, pride, anxiety, inner peace and many others,” Dick Evans said. “Seeing people from other cultures expressing these emotions reminds us of their humanity—and what we all have in common rather than the superficial characteristics that separate us.”

In addition to his many professional endeavors, such as working in the global metals industry and creating a minor in humanitarian engineering at OSU with Gretchen Evans, Dick Evans has published three documentary photography books on historical neighborhoods in his hometown of San Francisco: “Haight Ashbury” from 2014, “The Mission” from 2017 and “Chinatown” from 2020. Dick Evans’ photographs tend to focus on authentic images.

“Before written language, historically, art has been a form of communication between peoples as well as in society today,” Gretchen Evans said. “There is a saying by scholars in African studies that ‘African art speaks.’”

“Each symbol has a proverb attached to it,” Gretchen Evans said.

Her past artwork is extremely similar to the work presented in the upcoming gallery.

‘Missed Target’ and ‘Lost in Space’ are two of Gretchen’s favorite monoprints.

“These are representative of what drew me into this medium,” Gretchen Evans said. “The spontaneity of monoprinting and element of surprise are exciting to me and fits my personality and skill set.”

Gretchen Evans has loved art since 1967. Most of her artworks involve painting with acrylics on canvas or paper.

The Little Gallery will be holding a “meet the artists” reception with Dick and Gretchen Evans on Nov. 12 from 4:30 to 6:30 p.m.

“Their photographs, paintings and monoprints have inspired me and I believe will inspire those who see their work,” Wilhelm said.