Old World Deli reopening with renovations, ‘a step up’ from previous years

After ten months of closure, the Corvallis deli staple is back 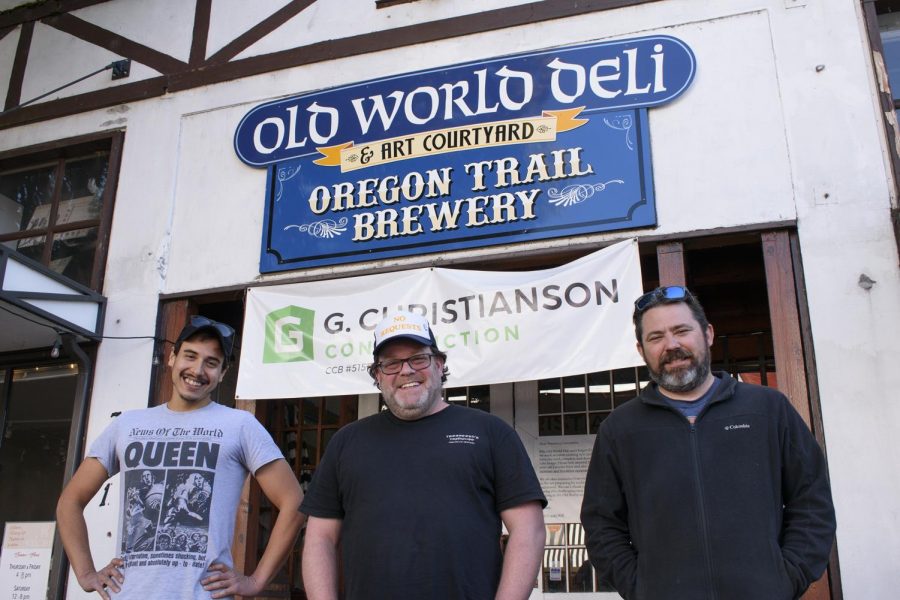 Old World Deli staff, from the left, Jeremy Gallup, Waylon Pickett and J.D. Monroe share their excitement regarding the reopening and renovations of the Old World Deli on Oct.15. Along with featuring new menu items, the renovated Corvallis, Ore. staple will have an expanded brewery and an upgraded performance stage.

Since its closure near the beginning of the pandemic, the Old World Deli will open its doors early November with a new owner and chef, along with renovations.

Despite being under new ownership, the deli, which is located at 341 SW 2nd St., will still hold true to its classic food items and include the same menu design it’s featured since 1977. While the design remains the same, new menu items will arise with new chef J.D. Monroe.

“I’m really excited about house smoked meats,” Monroe said. “Everything’s gonna be from scratch, like we’re doing everything the old school way, which I’m really proud of; it’s kinda how I grew up.”

Monroe will have a smoker set up outside the deli center and will be offering items like pulled pork, roast turkey and roast beef. Monroe is a barbeque fan and said pulled pork will be one of the new mainstays on the menu.

“We’re adding salads, breakfast and espresso to our menu, which we didn’t have before,” Monroe said. “The salads will be made to order: when you come in, you can customize your own salad or you can just order one of the stock four or five salads we’ll have.”

For breakfast, customers will be able to order eggs however they like and organic coffee will be offered at a separate bar in the store. Chorizo, breakfast burritos and grits will be amongst some of the new offerings at the restaurant as well.

Another new aspect of the establishment is the addition of a true deli. Customers will be able to order sliced meat and specialty cheeses so they can come and take part of the deli home with them.

“It’s a step up: [the deli] still holds some of the traditions from the past, as being a sandwich shop, but [we’re] kind of kicking it up to that delicatessen level,” Monroe said. “What do we have for delis in the area? We have Safeway, we have Market of Choice, we have Fred Meyer, but we don’t really have a deli.”

The deli is also sticking to its roots by keeping Jeremy Gallup on the team, who has been an employee of Old World Deli for almost six years. Gallup has helped the new owners learn how to prepare classic deli dishes—these dishes are now committed to a recipe book to ensure consistency.

“[I’m] looking forward to seeing the community back and getting excited about what we’re doing,” Gallup said.

Gallup has been working with new owners Waylon and Toby Pickett to help keep the deli in touch with what it used to be while bringing it forward with successful changes as well.

“We’re just really excited, all of us as a whole, to have the deli itself back, and bring back that charm that we all know and love,” Toby Pickett said. “My husband and I were away for a lot of years so we missed a lot of stuff that was going on [at the deli]; in some ways it’s gonna be an exciting new adventure for us as well.”

The Picketts grew up in Corvallis, Ore. but in 2002 they moved to the Bay Area and later to West Linn, Ore. in 2014. As of 2020, the Picketts moved back to Corvallis and purchased Old World Deli that September. Since the start of their ownership, previous owners Ted and Sussane Cox have helped show them the ropes and have had a hand in advising some of the new developments at the deli.

While the deli and kitchen is a focal point of the establishment, the Old World Deli Center, now co-owned by Toby and Waylon Pickett, is made up of more than just a restaurant. The Deli Center includes Valcan, which serves wine and offers wine tastings, Pegasus art studio, the Bookbinder and Oregon Trail Brewery, which is owned by Waylon Pickett’s brother, J.D. Pickett.

Beer has long been a big part of the Old World Deli Center but with the renovations and changes fostered by the Picketts, beer will play a larger role and there will be greater selection, Oregon Trail Brewery is expecting to reopen by the end of 2021. Along with a more diverse and expanded brewery, the performance stage is undergoing upgrades too.

“We’re gonna continue to have a lot of things [that have] always happened here, like the City Club and pub talks,” said Waylon Pickett. “We also wanna ramp up the music and the arts… Everybody loves the belly dancing. We just want to have a lot of music in here, of all varieties, whether it be jazz, bluegrass, heavy metal or whatever.”

Waylon Pickett said there has been a lot of community support for the reopening of the deli, and he has been happy to be in touch with founder and previous owner Ted Cox, with whom he now plays poker with every week.

“For a lot of people that come in here it won’t look that different,” Waylon Pickett said. “Since the very beginning the plan was to not change things drastically, but we wanted to take advantage of the time we’re down because of COVID-19, it’s the most opportune time to do the upgrades… I think [the renovations] are gonna be good for everybody.”