Clairmont: Students have a right to freedom of expression through the clothing they wear 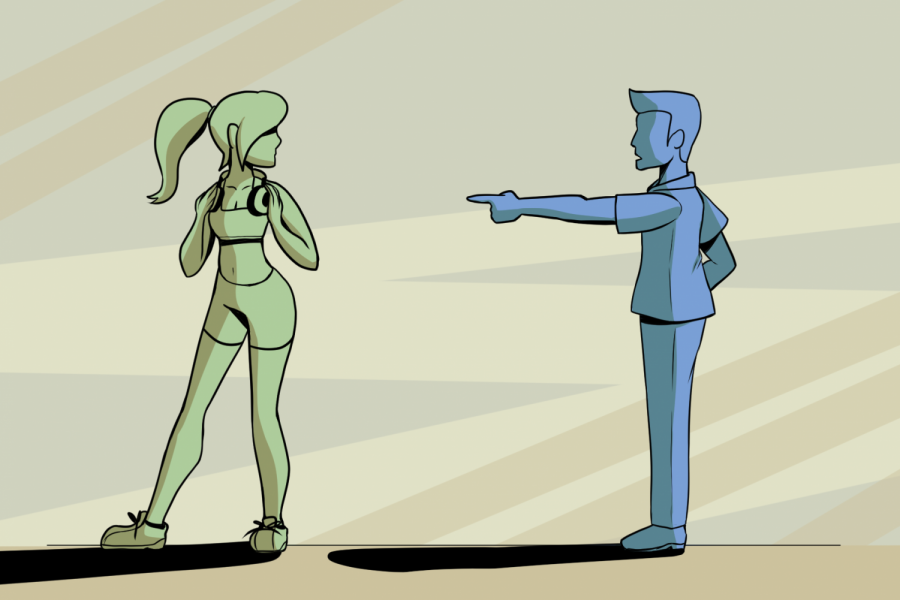 This illustration depicts a gym staff member calling out a woman who is wearing a sports bra and gym shorts. Dixon Rec Center's dress code may cause issues to those wearing certain gym attire that expose skin.

Body shaming and slut-shaming women and gender-nonconforming people plants the seeds of rape culture through which they are blamed for the reactions of men to their outward appearances.

OSU is not exempt from the effects of gender stereotypes and body shaming within the enforcement of dress code policies.

While participating in any physical activities within the Department of Recreational Sports on campus, women are forbidden from wearing sports bras. Students are also forced to cover their torsos and are not allowed to wear tank tops with lower cut armholes.

There are policies in place for men and women alike to prevent them from wearing clothing deemed distracting by OSU employees.

That being said, it is women who are generally issued warnings more frequently than men for the clothes they are wearing.

According to the Huffington Post, schools issue 90% of dress code violations to students who identify as female.

Kali Furman, a postdoctoral scholar in the OSU Difference in Power and Discrimination Program who holds a doctorate in women, gender and sexuality studies, emphasized how individuals can be extremely humiliated or embarrassed by dress code policing.

“This feeling of being policed in terms of your gender expression [creates] the inability to go about your day-to-day life without feeling self-conscious or like you’re doing something wrong,” Furman said.

Furman also added that dress codes are designed to be gender binary, meaning that they assume there are only two genders: men and women.

Members of the LGBTQ community who are nonbinary are policed based on what their gender is perceived to be by others rather than what they identify as. The university’s dress code policy enforces a lack of recognition and respect for gender-nonconforming individuals.

While the university’s dress code policy is viewed negatively by some, others find it necessary for various reasons.

According to Brian Hustoles, the associate director of marketing, communications and events for OSU’s Recreational Sports, the university enforces the policy to minimize the risk of skin infections and to ensure student safety.

“The Rec Sports Dress Code policy was last updated in 2018 and at the time, was prompted by student feedback regarding trends in workout apparel,” Hustoles said.

At a professional development workshop on Sept. 17, student staff members at Rec Sports voiced concerns about the existing policy.

Hustoles said the dress code policy will be reviewed with the Recreational Sports Student Advisory Board during the winter term when issues surrounding freedom of expression and comfort with the dress code can be addressed.

The policies enforced on a college campus are a reflection of a university’s values.

If OSU wants to be a university that stands for diversity, equality and inclusion, policies like these must be stuck down.

The OSU community is full of colorful and confident adults. They should have the right to wear what they feel comfortable in without being judged or labeled by their administrators and peers.