The significance of Veterans Day, ‘service before self’ 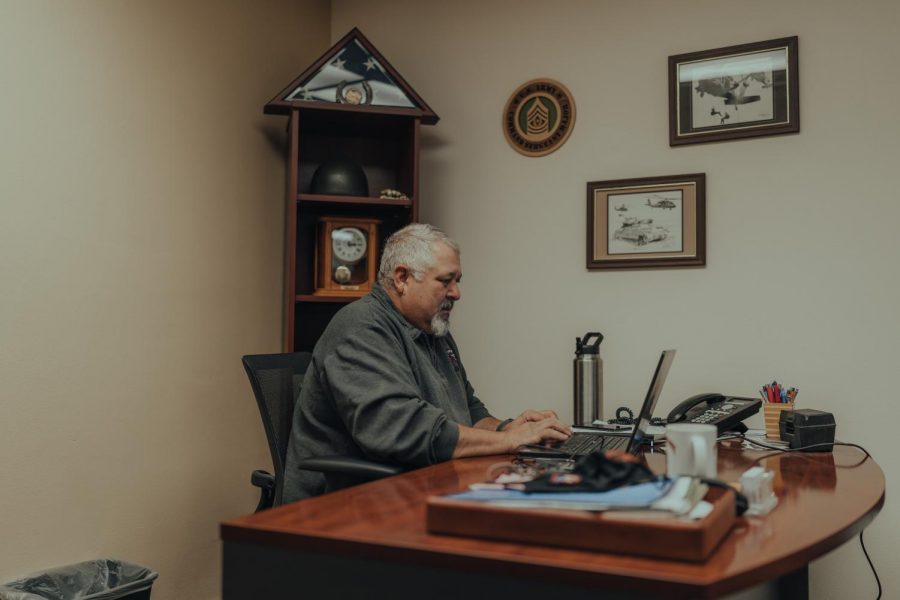 Academic Advisor and 25 year military veteran, William Elfering, works for the Veteran Resource Center at Oregon State University from his office in Snell Hall. Mr. Elfering believes, “Veterans Day should be less like Memorial Day and, instead, more of a celebration.”

The closest parade to Corvallis, Ore. is located in downtown Albany, Ore. and will commence at 11 a.m. the morning of Nov. 11 on Lyon Street.

According to a statement from the Veterans Commemoration Association, the Albany Veterans Day Reversed Parade is “the largest Veterans Day parade west of the Mississippi.”

William Elfering, OSU’s military and veterans resource advisor, served a total of 22 years in the U.S. National Guard. It is his seventh year as a leader and military aid for students and veterans at OSU.

“I am blessed they pay me to get up every day and take care of family,” Elfering said. “The best part is helping, whether it’s veteran service members or family members… get connected with them and get the opportunity to come here to OSU.”

Elfering noted OSU’s home football game against Stanford University on Nov. 13 will be a veterans appreciation game. Attendees will have the opportunity to show their appreciation and support for those who have previously served or are currently serving.

Elfering added that the Military Veterans Resource Center is currently working with OSU’s Alumni Association to host a veterans alumni panel discussion on Nov. 10. The event will be held virtually due to the pandemic and locational convenience.

“I enjoy Veterans Day because quite often there’s an opportunity to connect with my friends that I have served with and other veterans,” Elfering said. “I appreciate the parades and the other events that are going on. And as the military and veterans resource advisor, [I’m] trying to get that connection out to the rest of the community with our veterans.”

Sophomore and two-year participant in the ROTC Air Force Training Program at OSU, Cooper Wayne Johnson finds Veterans Day is a time to recognize the family and friends that sacrificed a lot more than him.

“I know a lot of my other friends who do have a lot of family [members] who have sacrificed a lot more than we go through here in just the preliminary program,” Johnson said. “At the end of the day, these other guys have made so [many] greater sacrifices… To me, it is about recognizing that and remembering it.”

Johnson added that it frustrates him to see people who not only take the day for granted but almost dismiss it altogether. He said he couldn’t even imagine what it would feel like for people who have given a lot and have been impacted by the military in some way.

For over four years, Adam Smith has worked as a senior airman mass communication specialist for the U.S. military and is currently also a third-year business student at OSU. Smith plans to generate imagery, media and press releases at his workplace to spread awareness for Veterans Day.

After serving his country, Smith said he came to realize the military gets you into the mindset of service before self.

“I feel like growing up, [Veterans Day] did not mean a lot to me, but the longer I have been in the military and the things that I have seen people my age do for people they don’t even know, that to me is something that is really special about being in the military and serving your country,” Smith said.