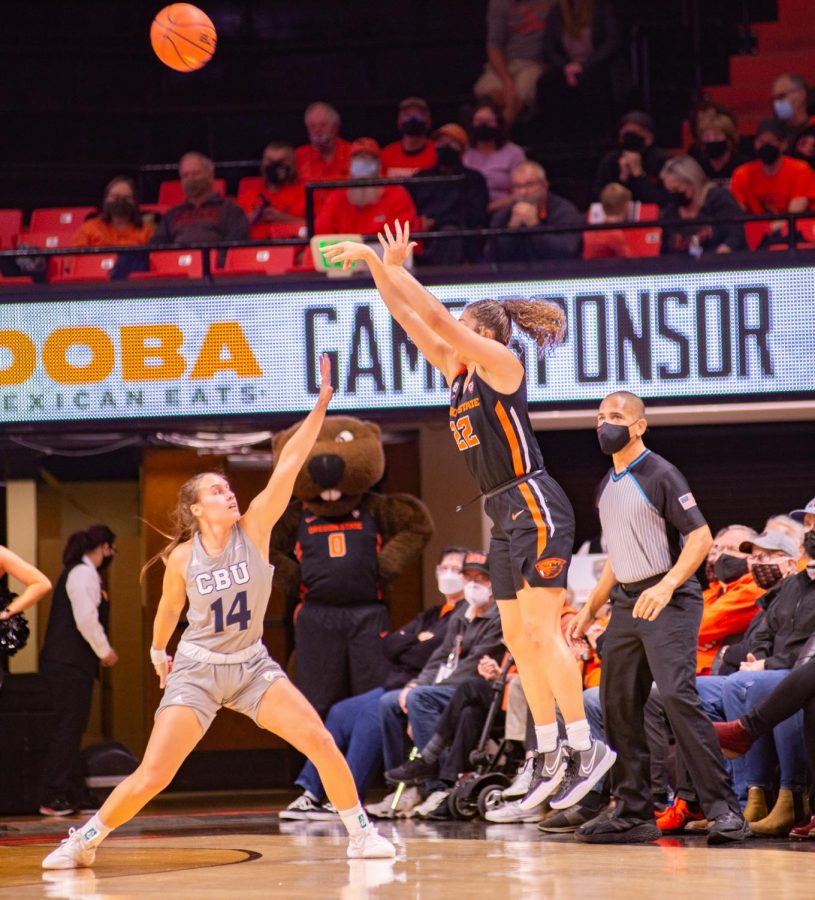 Oregon State freshman guard Talia Von Oelhoffen shooting a three-point shot over a California Baptist University Lancer in Gil Coliseum on Nov. 18. Von Oelhoffen's 18 points would help the Beavers defeat the Lancers by a score of 80-72.

Both the Beavers and the Lancers came into this game with an undefeated 1-0 record. After a rocky start to the game, the Beavers were the ones to leave with a perfect 2-0 record.

The Beavers opened up the game winning the tip and going down court for an and-one right off the bat. However, the Beavers initially had momentum, their lead quickly diminished. A mix of the Lancers shooting phenomenally at the three-point line and messy defense from the Beavers, the Lancers led ending the first quarter by a slim score of 24-25.

The fourth quarter was fought hard on both sides. The Beavers were able to maintain their lead throughout the quarter with the Lancers getting as close to within 5 points in the final minutes. The Beavers eventually went on to win the game by a score of 80-72.

“They came out and gave us all kinds of trouble. You know we learned lessons in that first half, [it] felt like we were a step slow defensively, but you gotta give them credit for playing so quickly,” said head women’s basketball coach Scott Rueck. “I’m proud of the way we closed this thing out and it was no surprise they made a run on us in the fourth quarter.”

The Beavers were led by freshman guard Talia Von Oelhoffen with 18 points, followed by sophomore forward Taylor Jones with 17 points and 7 rebounds. Redshirt-junior forward, Taya Corosdale led the team overall in rebounds at 12 with 5 offensive and 7 defensive.

The Beavers will be back in Gill Coliseum this Saturday to face the California State University Bakersfield Roadrunners at 12 p.m. .