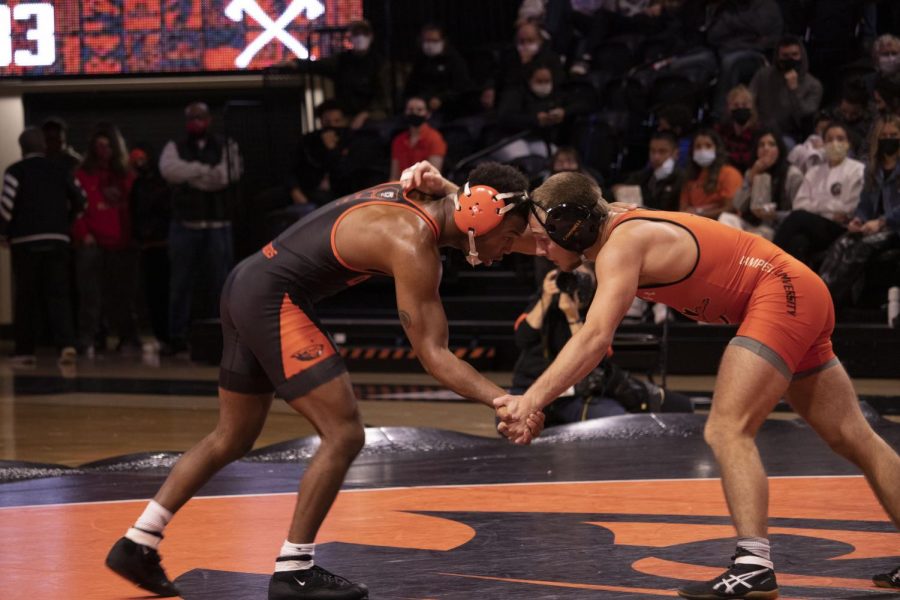 Oregon State redshirt-senior 133 lb. wrestler Devan Turner locking in the collar tie with an opponent from Campbell University in Gill Coliseum on Nov. 6th. Already with two PAC-12 championships under his belt, Turner looks to win his third PAC-12 title and become an All-American at the NCCA Wrestling Championships this season.

Oregon State University redshirt senior wrestler Devan Turner enters his final wrestling season as a Beaver and has accomplished almost everything there is as a collegiate wrestler.

Turner, who wrestles in the 133 lb. weight class for the Beavers, is a three-time NCAA qualifier. And while he has been to the big stage three times in his career, his ultimate goal has yet to come; being named an All-American.

He entered the sport of wrestling at the age of 5 and owes it to his father, Fred Turner. Turner said watching his older brother wrestle inspired him to get into the sport.

“When I was a youngin, I went and watched my older brother wrestle and I walked right out there on the mat; after that my dad signed me up and the rest was history,” Turner said.

Turner’s love for the sport would only start to grow from there. He eventually went on to wrestle for Dixon High School in Dixon, Calif., a little town roughly over 20 miles west of Sacramento, Calif. Dixon High School is in the Sac-Joaquin Section and Turner wrestled under the guidance of his high school coach, Chris McCoy.

His accolades racked up at a young age, ultimately leading to winning titles at the Peninsula Invite, Clovis West Shootout, National Championships, then being named the Outstanding Wrestler at the Sierra Nevada Classic in Reno, Nev. and more. At Dixon High School, Turner was also a four-time all-Golden Empire League selection, team MVP, team captain and wrestled for the California all-star team.

Turner qualified for state during his sophomore, junior and senior years of high school. However, he would only place fifth in the state his senior year of high school. Despite this, Turner was still offered a scholarship to wrestle for the Oregon State Beavers, and was eager for a fresh start in a new place in a different state.

He began his career at Oregon State as a redshirt-freshman in the 2015-16 season, and went 2-2 in varsity competition before his season was shut down with injuries.

“The losses at the PAC-12 championships kept me humble and hungry to win,” Turner said. It was that hunger that drove him to where he is today.

Turner is coming off of back-to-back PAC-12 championships and three straight years of qualifying for the NCAA tournament.

The most recent PAC-12 championship victory has meant more to Turner after the last year of living in a pandemic.

Turner had come out of a sixteen-day quarantine a week before the PAC-12 tournament came to Corvallis, which limited him to having no practices with the team. He still battled through that adversity and went 2-0 to become a two-time PAC-12 champ.

As tough as the COVID-19 season was for Turner, the Beaver wrestling team is welcoming a new coaching staff in Chris Pendleton, Nate Engel and Isaiah Martinez. On top of preparing for his final season, Turner also had to build new relationships with coaches.

Turner said he has his eyes set on yet another PAC-12 championship, as he knows another victory could place him one step closer to achieving a national title or All-American status.

“I believe in the work I put in and this is my final ride; my last year being able to wear that OSU singlet, I know what I can achieve—now is my opportunity to do it,” Turner said.

Turner is currently a redshirt-senior and team captain for the Beavers.

“I pride myself in being a leader of the team, someone my teammates can look up to on and off the mat and feel that they can depend on if they need anything,” Turner said. “It also gives me reassurance that I am doing the right things and provides me with more confidence.”

Turner said that confidence stems from his hometown, Dixon. He said it was Dixon and the people in it that gave him the confidence that he has today.

“It takes a village to raise a man and growing up in Dixon was that village for me; the support system that I had there was unmatchable,” Turner said. “My friends, family, even people I barely knew held me accountable and kept my head on straight. The city believed in me more than I believed in myself at times, and for that I am forever grateful and will always remember my roots.”

It’s no secret that Turner has a love for the sport of wrestling. But to him, it’s much bigger than that.

“It’s not only because I enjoy it and can see how great I can be, but also because of all the hours that my family, coaches and friends put into me to help get me to where I am at, working to repay them for all of their hard work—I owe it to them just as much as I owe it to myself,” Turner said.

Oregon State has been a home away from home for Turner, as he has built so many relationships and gained so much experience as a college student and as an athlete.

“I have built hundreds of relationships at Oregon State that will provide me with a great future,” Turner said. “The support system is great, the friendships I’ve built will be lifelong. All the opportunities I’ve been provided through OSU has impacted me in ways I can’t even grasp until I’m out in the real world, and for that I feel extremely blessed to be a Beav. Corvallis is truly the best college town in the PAC-12.”

Turner encourages Corvallis and the Oregon State community to embrace wrestling and bring their support to the wrestling mats at Gill.

“I would like them to understand that they make us compete better, when the fans are rowdy and bring the energy it makes wrestling so much more fun,” Turner said. “It plays a role in our advantage like any other sport—when the energy of the fans is high, the energy of the athletes are high.”

With the final season of his college career kicking off, Turner’s road to achieving his dream of being an All-American has begun. Currently ranked No.17 in the country, Turner knows that he is capable of winning his third PAC-12 championship in Tempe, Ariz. on March 6, and becoming an All-American at the NCAA Wrestling Championships in Detroit, Mich. on March 19.