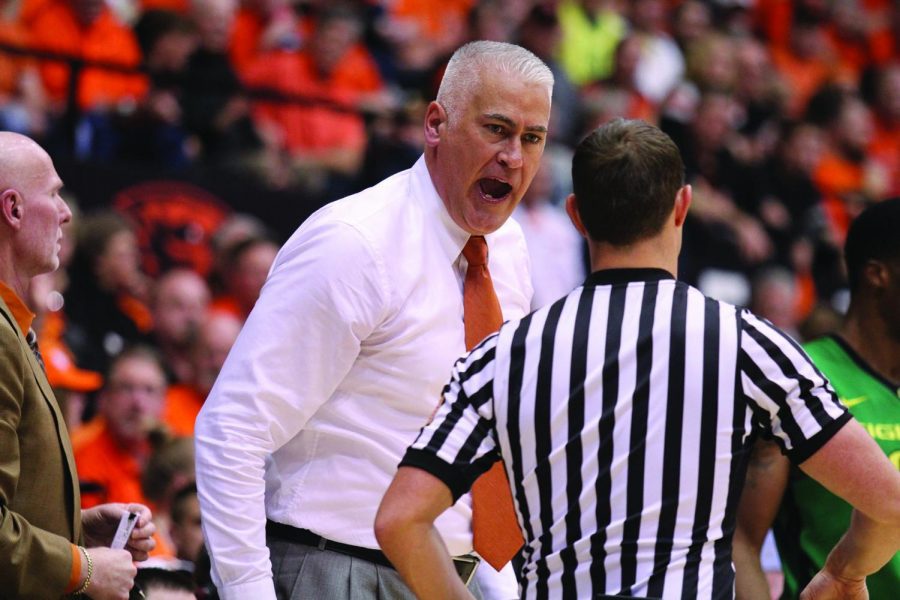 In this file photo from 2015, OSU Men’s Basketball Head Coach Wayne Tinkle talks with one of the referees during the 344th meeting between the Beavers and the rival Oregon Ducks in Gill Coliseum on March 4. This season, Oregon State is 5-4, and has yet to play a game since Jan. 4 due to COVID-19 safety restrictions.

The Oregon State Beavers Men’s Basketball program has paused team activity since Jan. 6, 2021 due to COVID-19 concerns within the program, leaving the chance to review how their season has gone thus far.

The currently 5-4 Beavers’ season started strong for the men, with two home wins right out of the gate. First, the Beavers triumphed over the PAC-12 conference opponent California Golden Bears by a score of 71-63. They were led by forward Warith Alatishe, a junior transfer from the Nicholls State Colonels, who led the team in scoring, minutes, and rebounds in what was the first game of his Oregon State career, finishing with 16 points and eight rebounds in 34 minutes.

The team followed up their opening night win with a historic performance, beating the Northwest University Eagles by a score of 114-42. The 72-point margin of victory was the largest in program history, and saw 10 players out of the 13 that saw the court put up five or more points in a balanced attack that overwhelmed the Eagles.

The Beavers then went into a tough stretch, losing their next three games by a margin of fewer than five points. In another game against a PAC-12 conference foe, Oregon State lost 59-55 in a sloppy game against the Washington State Cougars in Pullman, where the Beavers had more turnovers than assists and shot 35.6 percent from the field, 28 percent on their three-point attempts, and 50 percent from the free-throw line. No player put up more than 12 points.

The next two games were one possession home losses to mid-major conference teams, a 76-73 loss to the Wyoming Cowboys, and an 87-86 overtime loss to the Portland Pilots.

Once again, poor shooting plagued the Beavers against Wyoming, with the team once again shooting at around 35 percent from the field. Although the one-score loss did serve as a step in the right direction from the three-point and free throw lines, with the team shooting 36.8 and 78.8 from each respectively.

Against Portland, the Beavers, led by senior guard Ethan Thompson and his 31 points, shot with more success than the previous two games, but weren’t able to keep the Pilots from topping their offensive production, losing a close one in overtime.

Oregon State was once again led by Thompson in their victory over the Roadrunners, who put up 22 points to go along with three assists. The Beavers played great defense, holding the Roadrunners to 35 percent shooting from the field and 22.2 percent from three, for a total of 61 points, after allowing 87 to the Pilots six days prior.

The team followed up their get-right win over UTSA by beating the Portland State Vikings 67-62. In a rough shooting performance for the Beavers, who shot better from three than from the field as a whole, the team was led by senior guard Zach Reichle’s 15 points. Alatishe made yet another strong impact as well, finishing with a double-double of 13 points and 11 rebounds.

The next game, after a game against the USC Trojans was postponed due to COVID-19 concerns within the USC program, was against the California Golden Bears again, and followed a similar story. The Beavers came out on top by a score of 73-64, and were once again led in scoring by Thompson who scored 16 points.

In Oregon State’s most recent game, the team could not extend their winning streak to four in a loss to a Stanford Cardinal team that is 6-3 so far on the season. None of the Oregon State starting five could put up more than ten points, and the team combined to shoot 26.8 percent from the field. The Beavers were instead led by sophomore guards Gianni Hunt and Jarrod Lucas who came off the bench to put up 17 and 22 points respectively. However, strong play from the bench was not enough to stop Stanford senior forward Oscar da Silva, who put up 31 points and 10 rebounds.

The day that loss to the Cardinal, the Beavers paused team activities. For the time being, Oregon State is left with an overall record of 5-4 and a conference record of 1-2 after an up and down first nine games, good for 10th in the conference above only Cal and the Washington Huskies.

But even with the currently low conference standing, Head Coach Wayne Tinkle has found of sense of optimism behind a rough early-season stretch.

“We’ve lost a couple of tough ones early because of our inexperience, and we’ve had to deal with a ton of adversity,” Tinkle said via email. “But we have shown positive growth and hope to continue improving if we can get everyone to stay healthy.”

Statistically, the season has been as up and down as their overall record. On one hand, it is clear that their shooting within the arc needs work, as their 45.9 two-point field goal shooting percentage on the season ranks 295 out of the 344 teams that have played this season. However, their three-point shooting is at 36.6 percent on the season, good for 68th in the nation.

Oregon State has also done well in setting up teammates and getting offensive boards, ranking in the top 50 in the nation for assists and top 70 for offensive rebounds.

The defensive numbers are a similar story. The two-point defense has allowed teams to convert 48.4 percent of their attempts, 161st in the nation. However, the 29.1 three-point shooting they’ve allowed is ranked 43rd. At this point in the season, the Beavers have struggled within the three-point arc and excelled beyond it on both sides of the court.

“We’ve really shared the ball and shot well from three. We also have been a good offensive rebounding team and have taken good care of the ball,” Tinkle said. “We need to get better at our on-ball defense, especially in the post, and work on finishing at the rim offensively.”

Some of the Beavers’ struggles might be explained by the losses of key contributors from last season’s team, Tres Tinkle and Kylor Kelley, who hold the program points and blocks records respectively, both of whom graduated and moved on to the NBA after last season.

“We’re still trying to develop the leadership that we lost in those two,” Tinkle said. “Kylor was a great rim protector and finisher. Tres was Mr. Everything for us and brought that blue-collar mentality.”

The team does have two seniors for this year as well in Thompson and Reichle. Thompson has been able to pick up some of the scoring slack by putting up over 16 points per game in addition to averaging four assists per game, although this has come on under 40 percent shooting from the field. Reichle’s numbers, meanwhile, have been a step below Thompson’s at this point, averaging nine points a game to go with fewer than four assists and rebounds.

“We need more consistency, especially from the two seniors,” said Tinkle when evaluating their performance. “That will come though as this team continues to grow.  Ethan and Zach are the only two players that have been in our program for more than one year.”

In terms of the less experienced players, Lucas and Alatishe have both stood out. Lucas has been a spark plug off the bench, being the only player outside of Thompson to average more than 10 points per game, although it has come on less than 35 percent shooting. Meanwhile, Alatishe, a newcomer to the program, has been a key contributor on both sides of the ball, leading the team with 8.9 rebounds per game in addition to nearly 10 points per game on over 47 percent shooting.

The season has been streaky and inconsistent so far, but has been only a portion of a year where inexperienced players have been given important roles on the team. With a winning record and some potential growth after practice and play resume, the Beavers can still have the time to make a great season.

“There are so many things that are out of our control that could play a huge role in how the rest of our season goes,” said Tinkle. “If we can stay healthy and continue to get games in, I feel we’ll peak at the right time.”