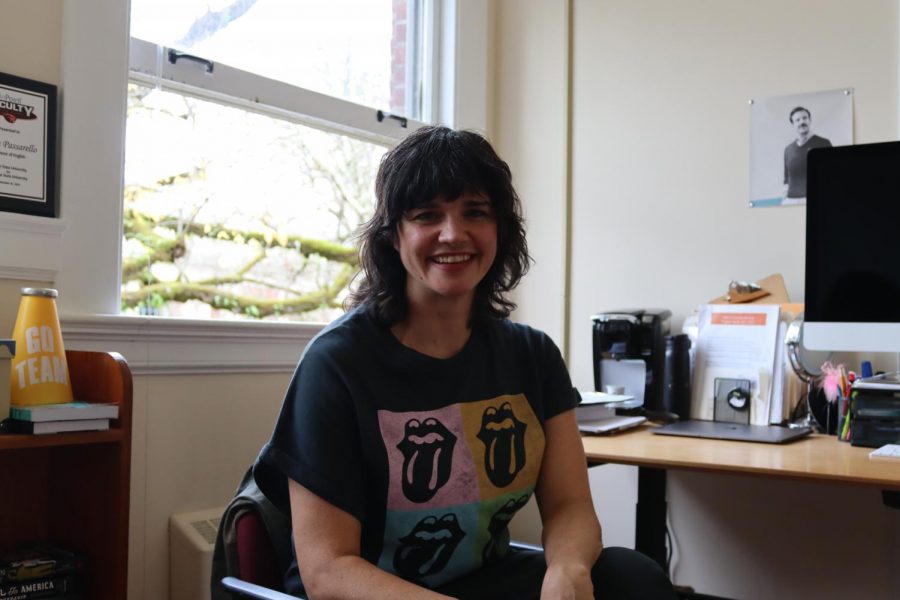 Professor Elena Passarello can be seen in her office in Moreland Hall on Nov. 30. With Jeopardy try-outs being brought online, former contestant professor Passarello recommends all who are interested try-out for the game show.

The Oregon State University associate professor who appeared on Jeopardy. Correct answer: “Who is Elena Passarello?”

According to Passarello, associate professor in the School of Writing, Literature and Film at OSU, she had always imagined herself being on Jeopardy but never actually tried to get on the show for various reasons.

“Alex Trebek started hosting Jeopardy when I was one year old,” Passarello said. “So my whole life, my family watched Jeopardy but usually it kind of seemed difficult to get on because you had to take a series of tests and then normally, for the very last test, you’d have to drive to a major city.”

When COVID-19 hit, Jeopardy auditions and tests were moved online and Passarello took the opportunity to be featured on the Nov. 8 episode of the game show.

Passarello, who’s been teaching at OSU for nine years, has had an expansive career in liberal arts fields, specifically teaching creative writing. Additionally, she is a well published author with books such as ‘Let Me Clear My Throat’ in 2012,  ‘Animals Strike Curious Poses’ in 2017 and ‘Goats and Sheep: A Portrait Farm’ in 2018. She has worked in theater as an actress and is currently a co-host for the radio show ‘Live Wire.’

Passarello’s colleagues said they were unaware of her Jeopardy ventures.

“I found out that she wanted to be a Jeopardy contestant just before she left to film the episode,” said Megan Ward, associate professor of English at OSU.

Peter Betjemann, Patricia Valian Reser director of arts and education for OSU’s College of Liberal Arts, said he had no idea that Passarello wanted to be on Jeopardy.

“It doesn’t surprise me because she really is a polymath—somebody who just is really engaged by knowledge in all sorts of domains—and you can see that in her creative writing,” Betjemann said. “She’s a nonfiction writer and she just sucks in information, and absorbs it and turns it around, and plays with it and turns it into these fabulous literary compositions.”

Betjemann added that Passrello is generous while mentoring her students.

“I was the director of the school in the past that she was a faculty member in, so I did actually have a lot of chances to observe how students reacted to her and she would develop almost a cult following,” Betjemann said. “I mean she really inspires her students and she works really closely to students in one-on-one ways and it’s just really wonderful to see.”

According to Betjemann, when she was hired, the College of Liberal Arts was excited to get a writer of a high caliber.

“Professor Passarello is a smart and intellectually curious person who also has experience as a performer—from being a professional actor to her current role as announcer on Live Wire Radio,” Ward said. “I imagine that she drew on all these facets for her excellent performance.”

George Estreich, instructor in the college of writing, literature and film at OSU said Passarello is “witty, incredibly smart and quick on her feet.”

Passarello prepared for the show by going over past Jeopardy questions and reviewing categories she was not consistently successful in. However, she said the buzzer, not the questions, proved to be most challenging.

“You have to be really good at the buzzer,” Passarello said.

According to Passarello, for practice, the Jeopardy correspondents told her to watch the show with a pen in her hand and wait until the host is finished reading the question before saying the answer since contestants are not allowed to buzz in until the clues are done.

“Which, at home, I would just shout at the television set, you know, for the past thirty years,” Passarello said.

While she had practiced beforehand, Passarello said the real life experience was a lot more nerve racking.

“The first round, I didn’t really get a lot of clues through, even though I think I knew like 90% of the questions that were on the board,” Passarello said. “There’s a rhythm you have to get into in order for your click to go through because everybodys hitting the buzzer at the same time.”

She noted that in the second and third rounds she was able to be more successful.

Passarello said being on the show during the COVID-19 pandemic included social distancing, a series of COVID-19 tests, masks—except when filming—and no studio audience. However, according to Passarello, this did not stop her from having a good time.

“I’m never gonna jump out of a plane but I bet it’s kind of the closest feeling that I will ever experience to throwing yourself out of a plane,” Passarello said. “I was really nervous but in a fun way. It was fun to feel that excited.”

After getting the final Jeopardy question correct, Passarello finished the game in second place with a total of $20,322.

“I don’t remember it, though,” Passarello said. “I have a picture of it, but my actual picture of being there is pretty spotty because I think I was just so nervous.”