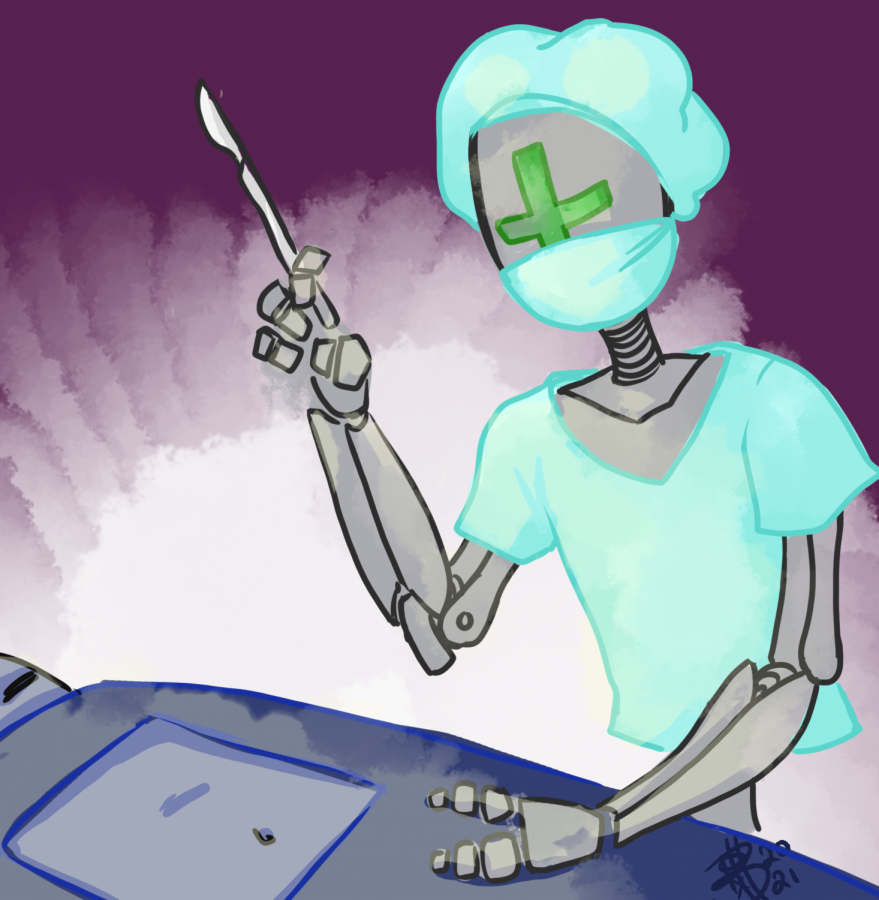 This illustration depicts Dr. Bot preparing their surgical table with a sleeping patient. In the future, by cleaning and disinfecting areas, robots could reduce the risk of exposure to disease for healthcare workers.

Dr. Bill Smart, Oregon State University professor of mechanical engineering and robotics, and his team are researching how semi-autonomous robots could be used in medicine to protect frontline workers during epidemics.

Smart said his research on the use of robots in healthcare settings started in 2014 in response to the Ebola outbreak in West Africa. The epidemic was deadly and killed about 50% of those infected.

At the time, according to Smart, he and his colleagues believed that robots might be able to help reduce the spread of the virus by programming them to do some of the tasks that were typically carried out by medical workers.

After some preliminary work and being given an award from the National Institutes of Health, which is a part of the U.S. Department of Health and Human Services, Smart talked to frontline workers in West Africa to see if robots would be useful there.

“I teamed up with some folks from Doctors Without Borders in Brussels and talked to some of the people who were on the ground in the West Africa outbreak,” Smart said. “I learned a lot about what the conditions on the ground are and what the actual needs are, versus what people in the White House think the needs are.”

According to Smart, robots wouldn’t have been useful in the medical tents set up for Ebola in West Africa.

“Taking an advanced robot to a field hospital in the middle of, let’s say, the Democratic Republic of Congo, you would need to take  an army of people with it, and you would need a generator and internet—when the need is actually to address the health care problem, and not throw technology at it,” Smart said. “They didn’t have the support staff to make it work or the resources, the reliable internet, to make it work.”

After this realization, Smart said he pivoted his work to target environments that were more capable of keeping and maintaining a working robot. Coinciding with the COVID-19 outbreak in 2020, Smart and his team saw an opportunity to create a robot that could aid in the global pandemic.

The COVID-19 virus has a lower death rate than Ebola. However, as an airborne virus, Smart said COVID-19 is more transmissible than a virus like Ebola, which can only spread through bodily fluids.

“With other things like coronavirus… it sticks to stuff sometimes, so you can’t see it and it’s harder for you to do disinfection for that because it’s not obvious where it is,” Smart said. “I think [COVID-19] is a good application of technology because you can have robots which keep track very accurately of which surfaces they swept, or they can just continually do the decontamination.”

Smart’s lab is working on perfecting the Fetch ultraviolet germicidal irradiation robot, whose purpose is to disinfect healthcare environments so that frontline workers do not have to.

According to Alan Sanchez, a doctoral student in Bill Smart’s lab, when Fetch sprays UVGI on surfaces, the light causes photochemical changes within the genome of a virus, inactivating its ability to replicate.

Sanchez explained that disinfecting large health care settings can be mundane, time-consuming and dangerous for people. Robots can reduce this risk of exposure for healthcare workers by performing tasks such as cleaning and disinfecting.

“In addition to reducing the actual risk, it reduces the perceived risk,” Smart said.

Fetch is one example of a semi-autonomous robot invented by OSU that operates through the lens of a human supervisor who can direct the robot to target certain areas for disinfection while specifying a disinfection rate.

Once Fetch has disinfected an area, it provides a map of exactly how much it has cleaned, reducing the perceived risk of entering that area.

“We can have shared autonomy between robots and humans to create a safer environment for healthcare workers,” Sanchez said.

Jodi Sorenson, nurse practitioner at OSU’s Student Health Services, believes that robots could be useful in healthcare settings and explained that OSU is already using technology to enhance medical services like telemedicine appointments.

“This method of providing care has been effective throughout the pandemic in decreasing face-to-face time spent with a person who is ill,” Sorenson said.

According to Sorenson, sanitizing and decontamination are useful applications for robots, but she said she is unsure whether robots could ever replace a human’s ability to assess, evaluate and assimilate medical information.

Smart similarly believes that while robots can be useful in medical settings, the care offered by human practitioners is unparalleled, comforting patients in a way that robots are currently incapable of.

“A robot can give you medications just as efficiently as a human nurse can, but that human nurse will look you in the eye and ask how you’re doing,” Smart said.

The COVID-19 pandemic has been stressful for healthcare employees working on the frontlines of the virus. According to Sanchez, a robot like Fetch could reduce the stress of healthcare workers by taking over some of their more tedious and tiresome tasks, such as disinfection.

“It really frees up their time to focus on more pressing issues,” he said. “There is a use for these robots within these settings to improve the overall safety and efficiency of health care workers.”