Modern Issues Scrutinized Accordingly: For just two hours a week, you can help over 100 houseless people 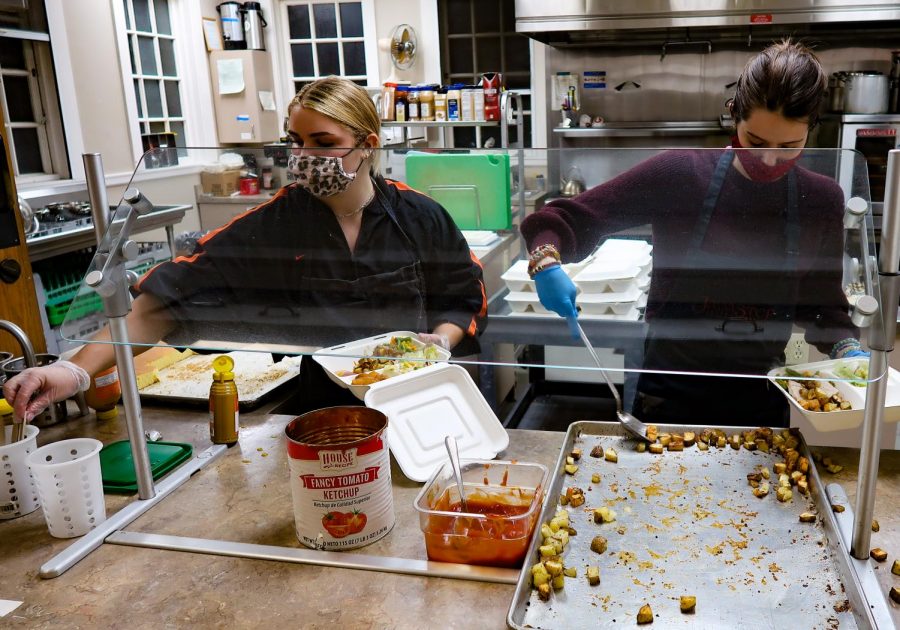 Grace Johnson and Paige McClain preparing dinner on a Tuesday night for the diners waiting in line outside of the building. Both volunteers are students of Oregon State University.

As fellow residents of Corvallis, Ore. dedicating just a little time to volunteering in the local community can ensure people without shelter at least have warm meals.

According to the League of Women Voters in Corvallis, there are anywhere between 800-1200 houseless people in Corvallis alone as of 2020, which means that there are at least that many people struggling to find food and shelter each day in 2022.

The good news is there are a handful of organizations whose sole purpose is to help out the less fortunate, including Stone Soup Corvallis, which serves meals daily at either St. Mary’s Catholic Church, First Christian Church, Third Street Commons or the Hygiene Center; as well as the Corvallis Men’s Shelter, which is located at 211 SE Chapman Pl.

As with most nonprofit organizations, the need for volunteers is always high, and all of these volunteering opportunities are less than two miles away from Oregon State University’s Corvallis campus.

Considering that the time commitment is as low as two hours biweekly, there are few plausible excuses to make about why volunteering would take up too much time in your schedule.

According to Sara Ingle, a member of the LWV and president of the board of directors of Stone Soup, a large portion of Stone Soup’s volunteer force consists of OSU students.

“A lot of students have gone through Stone Soup and developed a real appreciation for public service,” Ingle said. “I consider that part of our mission. Like congregate dining, it isn’t a mission that we can meet well during a pandemic.”

What Ingle means by congregate dining is simply allowing people to eat together indoors, which used to be the case before COVID-19. While such a restriction may not seem important to most people, Ingle argued otherwise.

“We’ve lost a big piece of what we provide for people and it is hard on the diners that they can’t congregate,” Ingle said. “But we’re very casual. Anybody’s welcome.”

Ingle noted that Stone Soup now hosts a drive-in at their Third Street Commons location, where people can pick up meals to go.

According to Ingle, right now, Stone Soup is in need of bilingual volunteers, especially at their south Corvallis meal site.

“We try to recruit bilingual people, and our website is bilingual, and we do most of our posting as bilingual,” Ingle said. “But it’s best if we have bilingual people on hand for taking orders and greeting people. Of course you’re gonna feel more welcome if you can understand the people we are interacting with.”

Even if you aren’t bilingual, you should still try to volunteer to help out, because anything you can offer Stone Soup is likely more than enough and will certainly make a difference for those you serve.

One of the volunteers that works at Stone Soup is Alivia Morris, who came on to work for a Human Services class she was taking. However, she felt like the work was less a requirement and more of something to enjoy.

“I do see myself continuing to volunteer after the required service hours,” Morris said. “Just because it is very fulfilling to be here and helping people. Everyone here is really kind and nice and really fun to work with. So you’re also making good relationships with good people.”

Morris said she finds her work satisfying because of the important service she offers people who are houseless in Corvallis.

“I think even in the brief interactions, we can see how it can really change people and help people with such a minor thing that we take for granted,” Morris said. “One of the best things we can do as humans is help each other out. And I think mutual aid is really important, that we help our neighbors and it’s super fulfilling. I would just say it’s worth it. It’s important. So come volunteer.”