PAC-12 Champions: Reflecting on a season full of firsts for men’s soccer 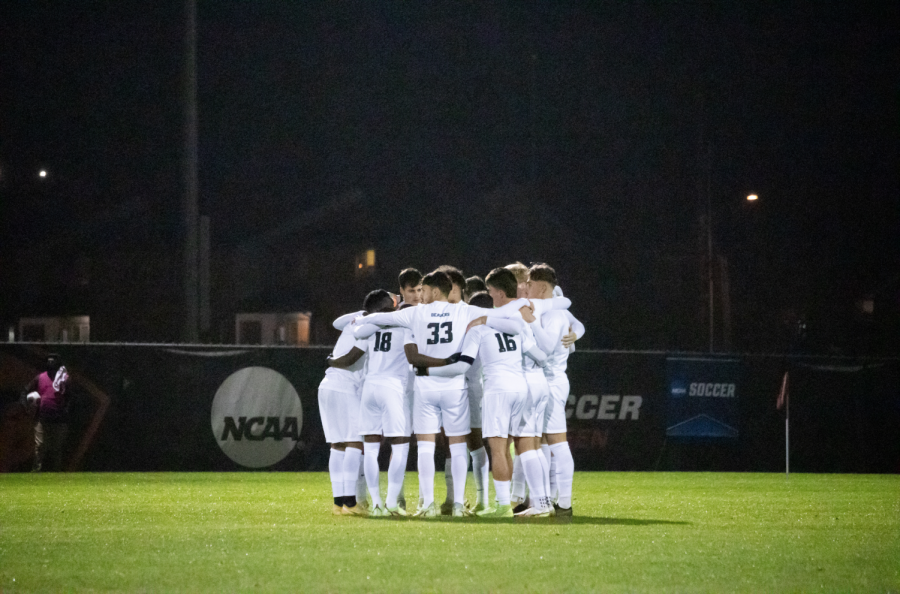 The Oregon State Men’s Soccer team huddling together before they faced off against the Clemson Tigers in Corvallis, Ore. on Dec. 4, 2021.

The score was tied at one apiece in Greensboro, N.C. between Oregon State Beavers and the Virginia Tech Hokies in the second round of the 2020 NCAA men’s soccer tournament.

With time winding down in the first overtime period, the Beavers were doing everything in their power to run out the clock and send the game into a second overtime. The Hokies had other plans.

With less than 10 seconds remaining in the first overtime period, Virginia Tech midfielder Chris Little served up a cross into the heart of the 18-yard box towards forward Jacob Labovitz, who had scored for the Hokies off a header earlier in the game. Labovitz was left unmarked as he sent a powerful header grazing off the side of the post and into the back of the net.

It was a golden goal in the NCAA sudden-death overtime format. Virginia Tech rushed the field, realizing that their dreams of staying alive were still intact.

Multiple Oregon State players collapsed to the turf in grief, while others stood shouting at one another over the goal they’d just allowed with five seconds left in the first overtime. It was a heartbreaking end to a season that held so much promise.

“The [overtime] loss to Virginia Tech hurt,” said Oregon State senior captain midfielder Joel Walker.  “As expected, it was not at all the conclusion to the season that we wanted to have. When those moments happen, of course, you have to reflect on the pros and cons of the past season, but there comes a pretty quick shift to where you start thinking about how to improve as a collective.”

Walker is a fifth-year senior from Colorado Springs, Colorado who has emerged as a leader in his time at Oregon State. As a junior in 2019 Walker earned an All PAC-12 First Team selection, and also made the College Sports Information Directors of America Academic All-District program that same year. As a player who’s been through a lot, Walker knows that there is never time to put your head down.

“That loss to [Virginia Tech] was difficult, but was a motivation for the group,” Walker said. “We felt like we owe it to our fans to give them a better story. For guys like Joe Hafferty—previous team captain—who got their season and collegiate career cut short, we’re excited to give back to our university, our community and most importantly one another.”

It has become clear to anyone paying attention that Oregon State is not hurting for motivation. The Beavers ended the regular season with a 12-2-3 record. On top of defeating the No. 1 ranked team in the country on the road, the Oregon State Men’s Soccer team won their first ever outright PAC-12 title and were seeded No. 1 in the NCAA soccer tournament.

Success like this doesn’t come easy, and Walker is complimentary of his team’s attitude and work ethic helping to lead them to where they are now.

“To be in the position we’re in right now does not happen overnight,” Walker said. “Amazing leaders and guys like Sofiane Djeffal or Tyrone Mondi will be the first ones to recognize that… The development over the years doesn’t happen if the freshmen or sophomores of the group don’t buy into the culture and mission. It has been a joy to watch the growth this year.”

Since the beginning of conference play, it became clear just how far the Beavers have come since last season. After starting PAC-12 play with wins over the UCLA Bruins, the San Diego State University Aztecs and the University of California Golden Bears, the Beavers had earned themselves a No. 8 national ranking before heading up to Seattle, Wash. and defeating the Washington Huskies, who were ranked No. 1 at the time, by a score of 3-2.

Even after suffering a late season upset loss at UCLA to the Bruins, the Beavers rebounded and earned themselves the No. 1 overall seed in the 2021 NCAA men’s soccer tournament. Walker said he and his teammates understand the mark this puts on all of them, having played a No. 1 team themselves this season.

“Being the No. 1 seed, we understand that there is a target on our back,” Walker said. “We know what it’s like to play the No. 1 ranked team in the country. There is a different feel to those matches. To be the No. 1 seed and play each game knowing there’s a large target on your back is an honor and fun place to be. In training, we apply immense pressure on one another so that when it comes game time, it is just another opportunity to piece together everything we had been building on the whole week.”

And heading into the tournament, Walker said he was still confident in the team’s ability to perform well.

“The PAC-12 has prepared us extremely well for the tournament,” Walker said.  “As we scout teams, we often draw similarities to the teams we’ve already played in our conference. This gives us a mindset of peace where we can psychologically position ourselves in a place where we’ve already been before.”

In the playoffs, the Beavers were able to handle the pressure well. After receiving a first round bye, the Beavers defeated St. John’s University Red Storm by a score of 2-0 in the round of 32.

In the Sweet 16, the Beavers outlasted 16th-ranked University of New Hampshire by a score of 1-0. Their attention then turned to a tough test against a top 10 team, when the Beavers took on the eighth-ranked Clemson Tigers in Corvallis, Ore.

It was a tough battle from both teams, but in the end, the Tigers came out on top, defeating the Beavers by penalty kicks 4-3 and stopping their magical run. It was the end of a historic run for the Beavers.

Despite this, Head Men’s Soccer Coach Terry Boss was grateful for how his team performed throughout the season, overcame so much adversity and impacted the community.

“My overall feeling is thankfulness for this group of seniors that started this journey with us in 2018 with nothing but a belief that this is possible, and thankful for the fans that came out and supported this group,” Boss said. “Just an overwhelming feeling of gratitude. It was magic in the stands to watch these young men inspire and bring hope. Our guys said it best; our goal has always been to bring hope to a community. From that perspective, we accomplished that. On the other side of it, we’re obviously devastated. We wanted to move forward and we thought we had the team to win the national championship.”

Regardless of the loss, the Oregon State Men’s Soccer team will work to get back into the NCAA men’s soccer tournament next year, win another PAC-12 championship and continue to etch their names into the history books.