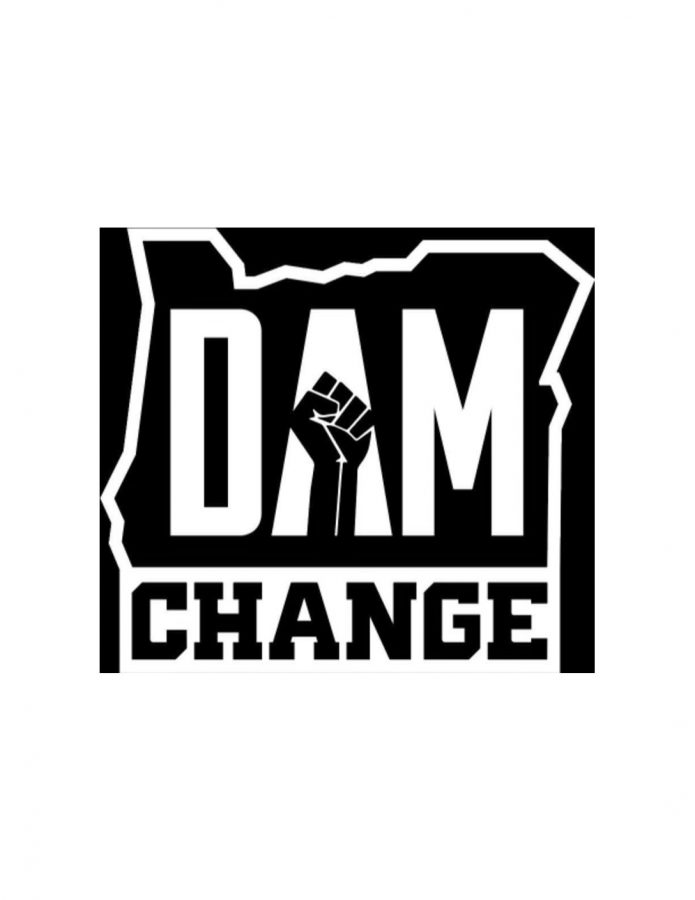 Pictured here is the Dam Change logo. Dam Change is an organization at Oregon State University that creates awareness about systemic racism.

Dam Change is a Black student-athlete-led organization on the Oregon State University campus that has come together to educate and raise awareness about systemic racism within society.

The creation of Dam Change began after the tragic murders of George Floyd, Ahmaud Arbery and Breonna Taylor, which initiated protests all throughout the nation in 2020.

Ten students from many different OSU sports programs came together after the Black student-athletes were disappointed in the lack of response and support the athletic program initially gave them. These student-athletes wanted more from Oregon State, and that led to the creation of Dam Change.

“We wanted to give Black students and student-athletes a safe space and a voice in the community,” said Nya Buckner, one of the founders of Dam Change and a redshirt- sophomore right side on the Oregon State Volleyball team.

The creation of the organization was no easy task, according to Buckner, but this was something that the creators understood. Dam Change was founded during the COVID- 19 pandemic, which limited their ability to go and reach out to communities of color due to the COVID-19 restrictions and social distancing guidelines.

Not only that, but Dam Change knew that not everyone would feel the same about these different topics.

Co-founder Madison Ellsworth, a redshirt- junior defender on the Oregon State Women’s Soccer team, said when starting an organization about racial justice, there are a lot of opinions.

“Some people are supportive and some people choose not to be,” Ellsworth said. “At the end of the day everyone has their own opinion, and we choose to continue to educate, engage and create awareness about systemic racism.”

According to Ellsworth, one part of Dam Change’s mission statement was to have high levels of engagement in the community. One way of bringing this engagement is to hold Dam Change sport events to bring focus and attention to their message.

For Ellsworth, perhaps one of the biggest achievements for the organization was the Dam Change football game that took place when the Oregon State Beavers hosted the Arizona State Sun Devils on Nov. 20,2021 at Reser Stadium. This Dam Change event would be the first of its kind in the academic year.

“We knew the Dam Change football game would be a perfect time to bring students from Portland on campus and have them speak with Black student-athletes and give them some words of encouragement,” Ellsworth said.

Since its creation in 2020, many student- athletes from other schools around the nation have also adopted a similar method to fight against systemic racism.“The schools across the PAC-12 are always in communication with one another, and we bounce ideas back and forth [between each other],” Buckner said.

Buckner said she believes Dam Change could begin to have a very similar structure to the Student-Athlete Advisory Committee on campus in the future. Ideally, Buckner said, Dam Change will eventually function as a sounding board for Black student-athlete voices to remain active in the community.

And though they know that the creation of the initiation has been great for educating, they hope the future doesn’t need the use of outside communities/organizations to push for quality on campus and around the world.

“Ideally, in the future, we won’t need a pro- gram like Dam Change, since Dam Change participates in the fight against system racism and the fight to achieve social change,” said Emma Deane, a senior defender on the Oregon State Women’s Soccer team.

Dam Change has given athletes the opportunity to find a community that uses voice to stand up for something that they believe in.

“Dam Change has given me the opportunity to get more involved in the fight against systemic racism year-round,” Deane said. “Rather than participating in sporadic events or protests a few times a year, Dam Change gives the opportunity to stay active consistently throughout the year.”

Dam Change has also impacted the OSU campus as well as those who are a part of the organization.

“I think Dam Change has opened the eyes of a lot of members of the school community,” Buckner said. “As an organization, it has served as a mechanism for bringing education and awareness about racial injustice to the fore- front. As an OSU community, we value diver- sity, equity and inclusion, and the reception to Dam Change reflects that.”