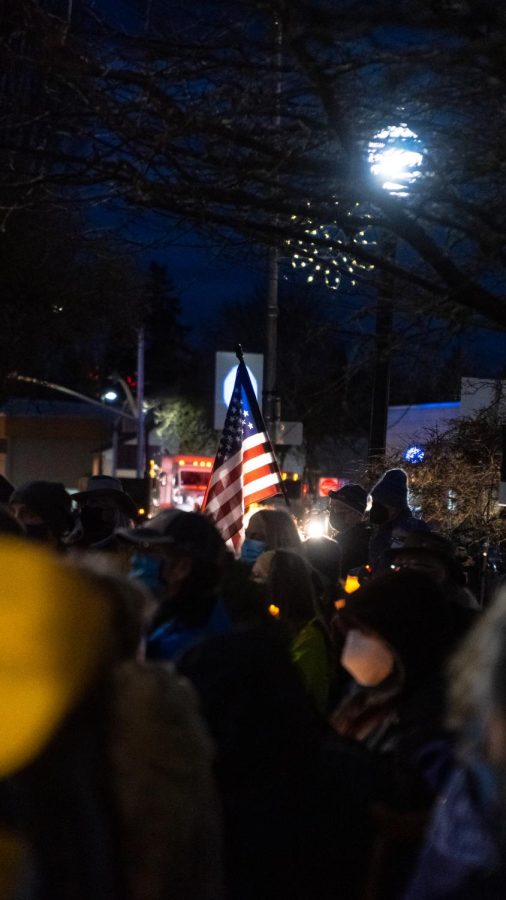 A lone American flag rises above a crowd of candles during the insurrection anniversary vigil at the Benton County Courthouse on Jan. 6. The vigil garnered a group of about 200 people.

A year after the U.S. Capitol insurrection on Jan. 6, 2021, political action groups led a candlelight vigil in remembrance and perseverance of democracy at the Benton County Courthouse in Corvallis, Ore.

Crowds of former President Donald J. Trump’s supporters mobbed the Capitol building last January, resulting in the deaths of five people, according to National Public Radio. The Federal Bureau of Investigation is still seeking information on those involved in the attack, having already arrested over 725 as reported by the U.S. Department of Justice.

The vigil was hosted by the Unitarian Universalist Fellowship of Corvallis and the Linn-Benton branch of the National Association for the Advancement of Colored People at 5 p.m. on Jan. 6.

“We thought it was very important to mark this occasion because the threat on our democracy continues even since the Jan. 6 insurrection at the Capitol,” said Susan Leonard, the political action committee chair of the Linn-Benton NAACP.

The event brought in about 200 community members holding signs and candles, with many more honking car horns as they drove by.

“I feel like it is very important to use our voices, to stand up for our freedom, for our right to vote,” Leonard said.  “I remember the absolute horror and fear and shock at what was happening a year ago in our Capitol.”

Leonard also read a statement from the area’s congressional representative Peter DeFazio: “In order to move forward from this dark and painful chapter in our nation’s history, we all have a role to play. We must work to safeguard the foundation of our democracy, including protecting the right to vote and reforming our democracy to ensure that the voices of all American people are equally heard.”

Similar support for political action and resilience were expressed by those in attendance, including Corvallis community member Jack Elder.

“I feel like our democracy is really threatened…” Elder said. “In other times there have been questions about elections but never this kind of violent reaction…  I hope to see the Voting Rights Act passed [and] the Build Back Better bill.”

“I want to demonstrate to my kids that we all get a right to vote and we aren’t going to let anyone take that away from us,” Wyse said.

According to Event Coordinator and Unitarian Universalist Fellowship member Claire Montgomery, many attendees hope to pass critical voting rights legislation in the future and unify the country through nonpartisan and bipartisan support for a free and fair democracy.

“We are at a crossroads now and it is really up to us to do all we can to save our democracy,” Leonard said. “I will not hesitate to say that I am afraid, but admitting your fear is one thing and letting it stop you from doing action is another. We can be afraid, but we also have to be courageous and we have to be active, and we have to keep doing it.”