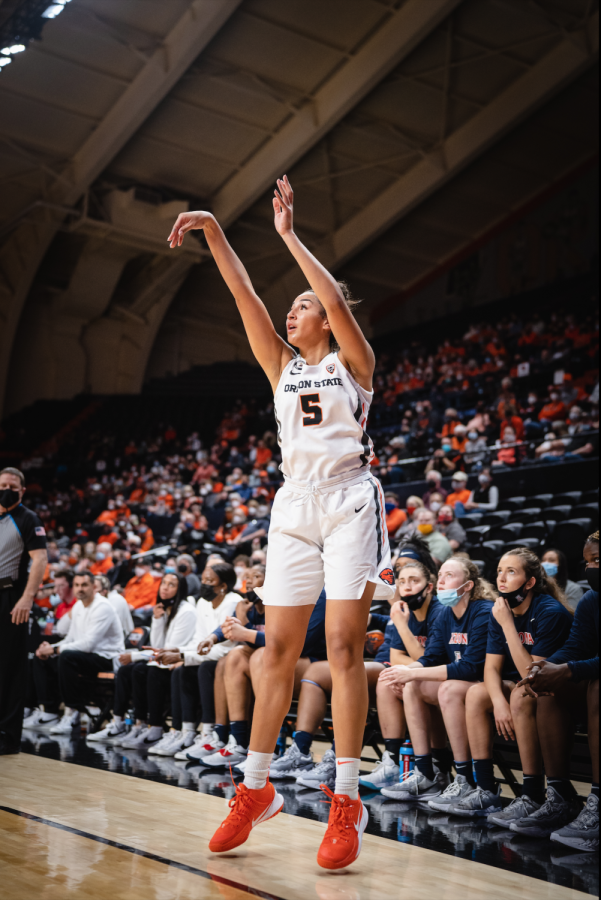 Oregon State redshirt-junior forward Taya Corosdale taking a three-point shot against the Arizona Wildcats in Gill Coliseum on Jan. 13, 2022. Despite Corosdale finishing with a career-high 19 points, the Beavers would fall to the Wildcats by a narrow score of 55-53.

In their return to Gill Coliseum in 43 days, the Oregon State Women’s basketball team came up just short in a 55-53 loss to the No.7 ranked University of Arizona Wildcats on Thursday night.

On a night without starting sophomore forward Taylor Jones, the Beavers fought hard and took a four-point advantage with 2:57 left to play after a jumper from freshman guard Talia Von Oelhoffen.  The Wildcats were able to hold strong on their next four defensive possessions, however, and mustered enough offense to tie the game at 53 with under a minute to play.

With the shot clock turned off, the crowd at Gill Coliseum got to their feet as Arizona guard Shaina Pellington worked in isolation against a defender, winding the clock down for a final-shot attempt.  With just two seconds left, Pellington used a pound-dribble off her right hand to get some separation, and drilled a tough fade-away foul-line jumper with .5 seconds to play, silencing the Oregon State crowd.

Despite the blow, the Beavers still had one final opportunity after advancing the ball down the court with their final timeout.

“Even with .5 [seconds left], I thought we had a play that actually might work,” said head women’s basketball coach Scott Rueck. “But they [made] a great play on a tip.”

After running a couple screens, the inbounds pass was knocked away on a great play by a wildcat defender, and time expired at Gill Coliseum with the seventh-ranked Wildcats holding on by the skin of their teeth.

Senior Guard Bendu Yeaney was the leading scorer for Arizona with 15.  Senior forward Cate Reese and senior guard Shaina Pellington, who hit the game-winner, both added 12.

Junior forward Taya Corosdale had a monster game for the Beavers, finishing with 19 points and eight rebounds. The 19 points for Corosdale was a career-high for her. von Oelhoffen and redshirt-senior forward Ellie Mack had nine points apiece.

Despite the loss, Corosdale had nothing but positive remarks for her teammates.

“Coming off of the setbacks we’ve had, I think we were all just really hungry to play and I think that really showed how tough we are,” said Corosdale.  “I am frustrated that we came up short but we’ve just gotta keep pushing, keep working hard.”

And despite the loss, Rueck said that he was excited and glad to be back in Gill, especially knowing that this would be the first PAC-12 game for a lot of his players.

“It was great to be back,” said Rueck. “We knew that Arizona would be tough, physical and ready for a war. I was really proud of our effort tonight – I loved the way we competed. We had a lot of people playing in their first Pac-12 game tonight, and they played really well and really gritty. In my opinion, this was a good sign of things to come for this group. I thought this was a great game.”

With the loss, Oregon State falls to 7-4 on the season and 0-1 in PAC-12 play.  Next up, the Beavers will take on the No.22 University of Colorado Boulder Buffaloes on Jan. 17 at Gill Coliseum at 2 p.m.