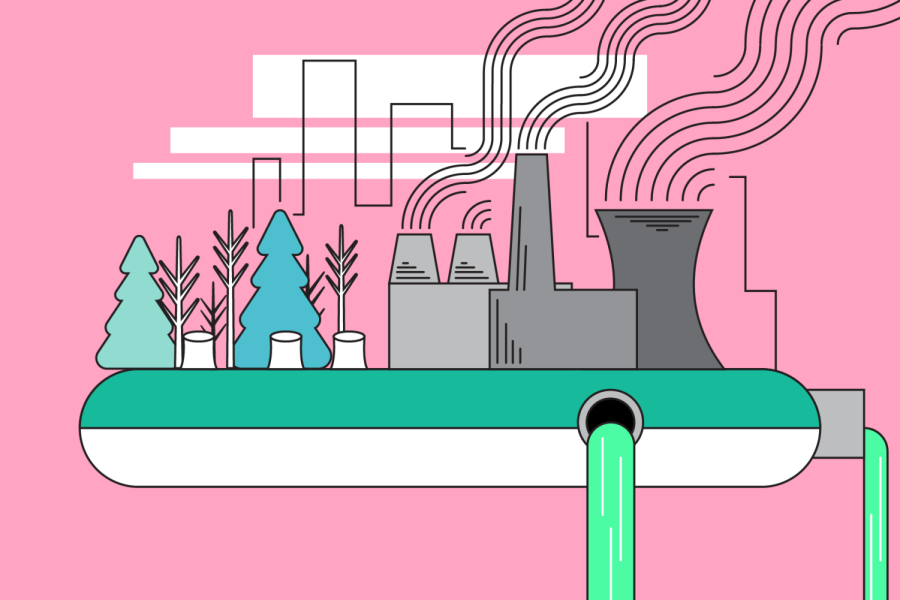 This illustration highlights aspects of deforestation, drainage concerns and loss of access. An upcoming public hearing about land use on Jan. 19 is an opportunity to address environmental and access concerns in relation to a proposed housing development in Corvallis, Ore.

In the Timberhill area north of Corvallis, Ore. is a 41-acre rectangle of land that could end up being annexed into the city to allow for a new housing development.

Opposed to this project, however, is an informal group of community members who, for the sake of protecting this spot of land, have called themselves Saving Open Space Corvallis.

I spoke to Barbara Naimark, who has organized much of the resistance against this housing development and is a part of Saving Open Space Corvallis, and she brought up many environmental issues that could come from replacing the wilderness with houses, especially fire danger.

“It’s acknowledged by the university and by pretty much anyone in the city that further development into the wildland-urban interface increases the wildland fire risk,” Naimark said.

With fire season in Oregon becoming bigger and worse, we should especially be concerned about how our housing areas interact with fires.

“[This] doesn’t just endanger the immediate neighborhood, it endangers all of Corvallis,” Naimark said. She reminds us that even residents who do not enjoy the natural aspect of the area may end up being affected by the houses that would be put in because of the fire danger they pose.

Pam Burnor is a resident of Corvallis who lives in the Timberhill area. She is particularly concerned about increased traffic that would come with new houses.

According to Burnor, the developer estimated over 400 extra trips each day which would congest roads like 29th Street that were not built to handle so much traffic. The everyday commute may become busier and longer, but that is not the only reason traffic is on Burnor’s mind.

“There is not sufficient egress in and out of this neighborhood if there were some situation if we needed to evacuate, so I’m very concerned about that,” Burnor said.

Large evacuations may be uncommon in the Corvallis area, but with the increased fire danger, having the ability to evacuate efficiently is even more pressing.

Just two summers ago in September 2020, the City of Corvallis declared a local state of emergency as severe wildfires stretched across the mid-valley area, and residents anxiously refreshed their evacuation warning status to find out if they should pack their belongings yet.

Even without the fire danger in mind, evacuation is still a critical factor to consider when developing housing.

Naimark also expressed concern over sensitive species that would be harmed by the development project such as the acorn woodpecker and old-growth trees.

“Some of those trees are old oak trees, more than 100 years old,” Naimark said.

Currently, the plot of land is also an access point to the McDonald-Dunn Forest; however, after the development, residents would have to find a different place to enter the forest.

When considering this development one should also ask, who would this new housing be serving? After all, Corvallis is short on housing and the housing that is available is not affordable.

The proposed annexation connects wealthy families to wealthy housing in a desirable part of the city, right up against the wilderness. Any new houses planted there will be expensive and inaccessible to the residents who need it most.

The nearby, convenient wilderness is part of what makes Corvallis unique and desirable, but if wealthy neighborhoods keep extending their borders into our natural spaces, then they will become the only ones who have access to those spaces.

The housing development will harm the environment and the quality of living in Corvallis without offering any benefit for those who need it—not for the homeless people, not for the poor college students, not for any of the other Corvallis residents who are struggling to make ends meet.

The good news is that the annexation has not been fully approved yet, and Corvallis residents can have their voices heard on the subject on Jan. 19 at 6:30 p.m. when the planning commission meeting takes place.

Poor development plans can be moved to smarter locations, but ecosystems, trees and habitats can’t. Protecting natural spaces needs to be a priority over housing that serves the wealthy.