Beaver Wrestling gets first conference victory of the season 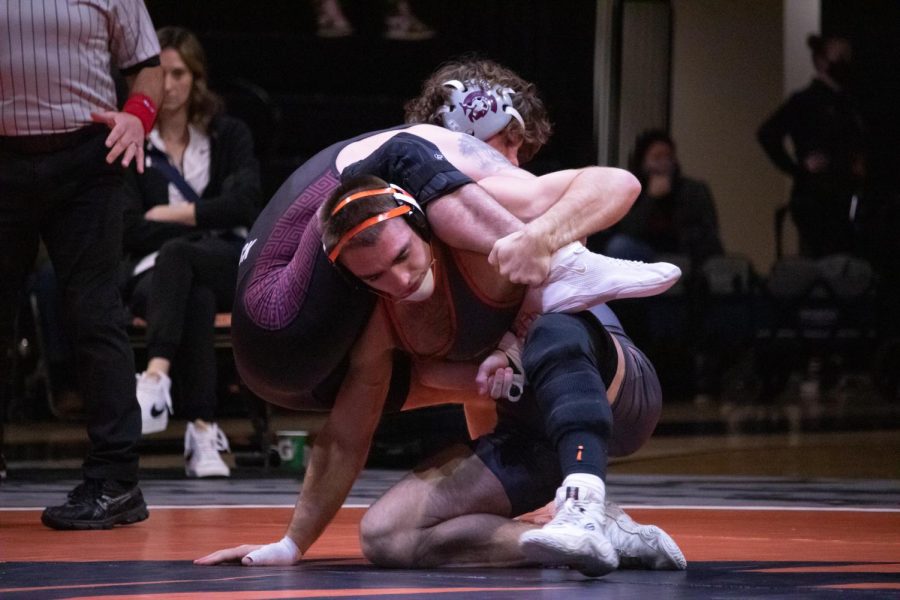 Oregon State redshirt-junior 157-pound wrestler Hunter Willits elevating his opponent's leg to get the takedown against the University of Little Rock, Arkansas Trojans in Gill Coliseum on Jan. 14, 2022. Willits would win his match by a score of 7-2, and the Beavers would win the meet by a score of 34-0.

The Oregon State wrestling team won decisively against the University of Little Rock, Arkansas with a  34-0 victory shutout at home on Jan. 14.

This was their first match at home this season since November when the Beavers faced off against the Lehigh University Mountain Hawks and the Campbell University Camels. This meet also marked the first PAC-12 dual meet for either team of the season.

After the meet, Turner, who won his match by a score of 12-2, said that the team was excited to be back inside of Gill Coliseum.

“The team was excited to compete and all around we felt good and anxious to get back on the mat.” Turner said.

Head wrestling coach Chris Pendleton echoed Turner, being overall glad with his team’s performance. Along with many sporting events being postponed or cancelled due to COVID-19, Pendleton understands that these days, it is a victory to have the opportunity to compete.

“Anytime we can compete and we get to compete, that’s a win,” Pendleton said.

The Beavers’ season is in full swing and the team is headed on the road next week to compete against the University of Wyoming Cowboys  and the University of  Northern Colorado Bears. Heading into those two dual meets, Pendelton was pleased with the overall team performance, but knew that there could be little things that can make the team better. “We’re training for a marathon, not a sprint,” Pendleton said.