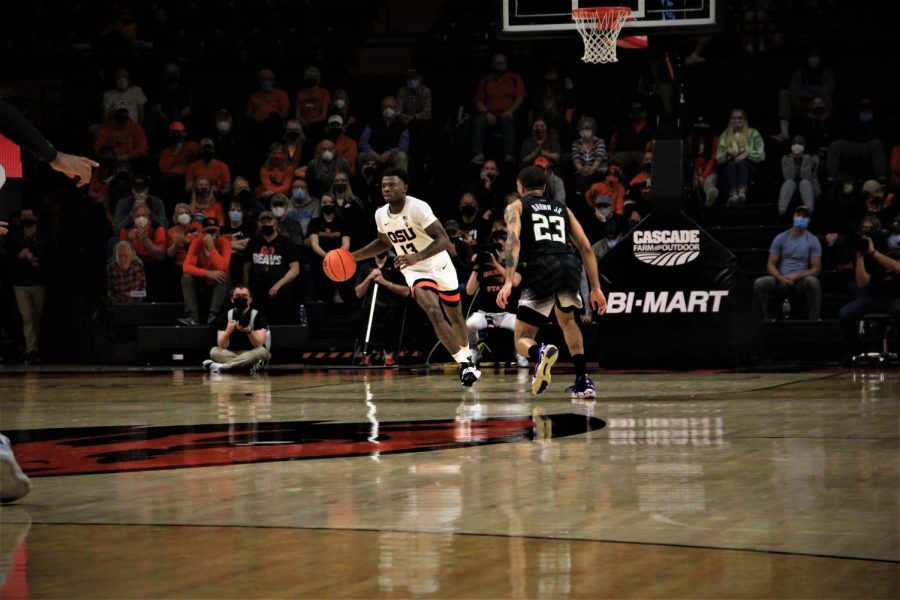 Junior guard Dashawn Davis dribbles the ball past a defender against the University of Washington Huskies in Corvallis, Ore. on Jan. 21, 2022. Despite Davis scoring a career-high 17 points and 8 assists, the Beavers still lost to the Huskies by a score of 82-72.

The Oregon State men’s basketball team suffered a loss to the University of Washington Huskies 82-72 in Gill Coliseum on Thursday night.

The Beavers have now lost four straight games after finishing with a two-game winning streak to close out last month.

Junior guard Dashawn Davis led all scorers for Oregon State with a career high 17 points and eight assists, as the Beavers experienced another poor shooting night from the three-point line. Senior center Roman Silva finished with 13 points and Freshman forward Glenn Taylor Jr. finished with 10 points shooting 3 of 6 from the field.

The Beavers couldn’t gain any offensive rhythm at the start of the game, initially having no answers to Washington’s zone defense but found a rhythm taking 38-36 lead at the end to close out the first half. However, throughout most of the game, both teams jockeyed for the lead with the lead changing hands nineteen times until the Huskies took control of the lead with 13:00 in the second half.

“Our 1-3-1 is not near as energetic or aggressive as we’ve been, our 2-3, We tried to go to those things, and they made us pay.” said Head Coach Wayne Tinkle when asked about the team’s defensive struggles.

“What it comes down to is a lack of awareness on certain things,” said Senior center Roman Silva. “I hate to say it, but sometimes it’s a lack of effort. Some guys aren’t paying attention. Leadership plays a big role, and we’ve got to be better at that.”

Despite the poor execution for the Beavers on the defensive end, the Beavers continued to execute on the offensive end to try and keep the game within reach.

The Beavers tried to mount a comeback led by Davis scoring six points on an 8-2 Oregon State run to cut the Huskies deficit 67-62 with five minutes left in the second half. However, the Huskies never looked back, putting the comeback to rest with a three point from Fuller extending the Huskies lead 76-68, ultimately securing the win for the Huskies.

“As we fought back into it, I thought at a couple of key moments we fell apart, which has been something that’s cost us in the past,” said Tinkle, “I thought we had moved past that in the last month.”

Despite the result, the team acknowledged the improvements that have been made in the last month aren’t enough to win games down the stretch. The lack of consistency on the defensive end have costed the Beavers victories and there is a sense of urgency from the team to work together to improve those issues for their next game.

“We’ve got to come together more as a team and focus more, defensively, especially down the stretch.” said Senior guard Xzavier Malone-Key.

“We’ve got to make it more about the team and not about anything individual,” Tinkle said. “That will lead to trust and consistency defensively, to where we have each other’s backs, and we don’t let a team shoot that percentage.”

The loss to Washington, now puts the Beavers record at 3-14 and a 1-6 conference record. The Beavers are now scheduled to travel down to Eugene to take on Oregon on Jan. 29th with their matchup against Washington State this Saturday, being postponed due to Covid-19 issues within the Cougars’ Program.