Beavers collapse in second half, lose big to UCLA 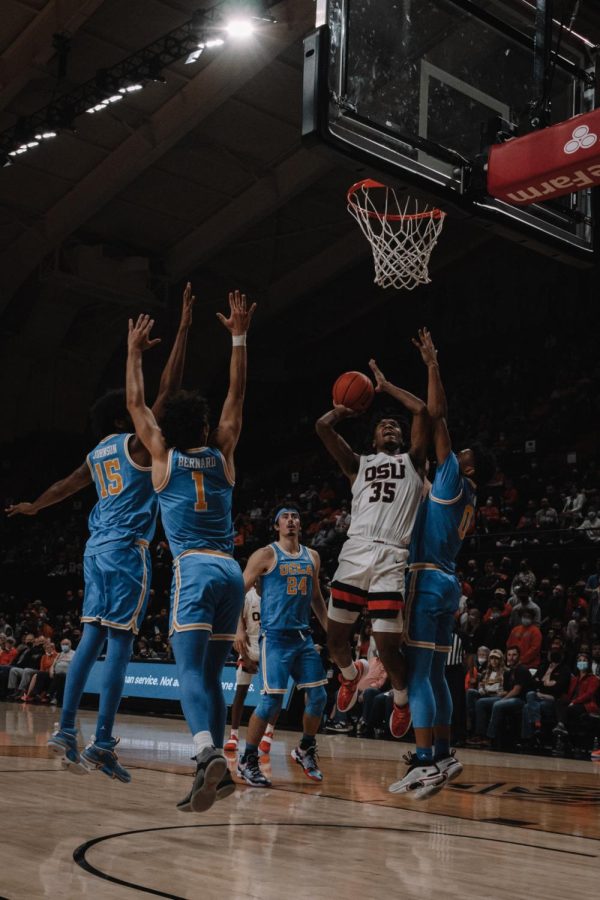 Freshman forward Glenn Taylor Jr. fights his way through the UCLA defense in route to his 10 point performance in 34 minutes. The Beavers lost to UCLA by a score of 94-55.

The Oregon State Men’s basketball team suffered a humiliating 94-55 loss to the No. 12 UCLA Bruins on Saturday afternoon at Gil Coliseum.

After the Beavers jumped out to a 14-9 lead early in the first half, UCLA responded with an astounding 65-24 run over the next 31 minutes of game time, putting Oregon State to bed well before the game clock expired.

“Obviously a brutal, brutal game,” said Oregon State head coach Wayne Tinkle.  “Absolutely unacceptable. I’m not even going to look to the other night, but to not come out and respond for forty minutes-shame on us, shame on us.”

After falling behind 43-28 going into the locker room, Oregon State showed signs of life early in the second half, cutting the deficit to a manageable 11 points with 17:50 left to play. From that point on, however, everything came shattering down in a game where UCLA hit 13 triples and had an impressive seven steals.

In reflecting on the result, Tinkle alluded to another senior night back in 2017, where the Beavers were defeated 80-59 by rival Oregon.

“I haven’t had any other teams, maybe but once, where a game got too much and we mailed it in,” said Tinkle.  “Oddly enough that was on a senior night as well, and this brought back that horrendous feeling.  So shame on us, very, very, disheartening.”

Senior center Roman Silva, who turned in a solid performance with 10 points and seven rebounds, was asked if he thought some guys quit playing in the second half.

In what was an offensive onslaught, all five UCLA starters finished in double-figures.  The Bruins were led by Junior guard Tyger Campbell who scored 20 and shot 8-10 from the floor, and Junior guard Jaime Jaquez who finished with 17.

With this result, the Beavers drop to 3-24 on the season and 1-16 in Pac-12 play. With three games remaining plus the conference tournament in Las Vegas next month, Tinkle knows that there is no time to put their heads down.

“These games happen,” Tinkle said, “But you’ve got to continue, that’s life. If you hit adversity and you turn the other direction, quit, cancel, fold, you can’t do that in life. I mentioned time before we got waxed on a senior night, and you come back the next day, you go to work, you put any embarrassment behind you, you man up and you find a way to dig yourselves out of a hole. Which we have been able to do, and I know we’ll be able to do that from this too.”

The Beavers return to action on Monday night against the Washington State Cougars, which will be their final home game of the season.