A 6,000 mile sisterhood: the relationship between Corvallis & Uzhhorod during Russian-Ukrainian war 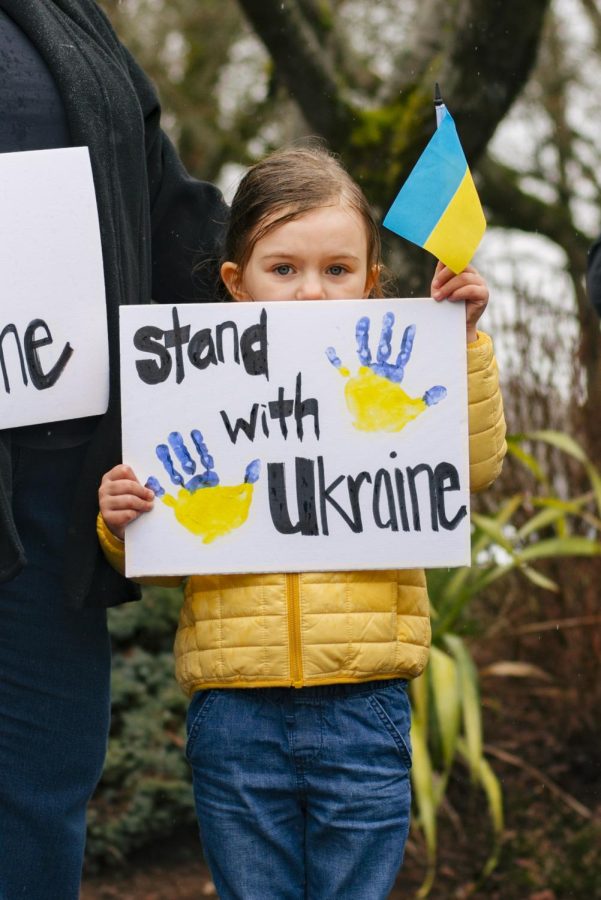 4-year-old Belle Baxley holds a homemade sign while protesting in support for the people of Ukraine at the Benton County Courthouse in Corvallis, Ore. on Feb. 26. This is Baxley’s first protest.

What do Corvallis, Ore. and Uzhhorod, Ukraine have in common? They’re sister cities.

Since 1989 and the founding of the volunteer-run Corvallis Sister Cities Association, Corvallis and Uzhhorod have shared a special relationship spanning decades of medical care, pen pals, exchange students, business training and other resources.

CSCA President and Oregon State University faculty member Robert Kokenyesi, who was born and raised in Uzhhorod, said the association between Corvallis and Uzhhorod is still as active as possible, despite setbacks due to the COVID-19 pandemic and the war with Russia.

CSCA board member and Take One Ukrainian Child’s Hand Project Co-Chair Alice Rampton said a TOUCH project delegation delivered $40,000 to Uzhhorod in September 2021, before the omicron variant limited travel again. She said they’ve already raised another $40,000 since then.

Past CSCA president and current member Pete Bober said there are three levels of relationships: colleagues, friends and family. He said after 20 years, the people of Uzhhorod are more like family. Bober also said OSU President Robert MacVicar signed and submitted the original incorporation papers with the state of Oregon. MacVicar was president of OSU from 1970 to 1984.

Rampton said the CSCA was founded by a group of Corvallis residents who wanted to communicate with citizens of the USSR. They researched multiple Ukrainian cities but ultimately chose Uzhhorod because it had a university, was located near mountains and a river and was in an agricultural area—much like Corvallis.

Rampton said in the 1990s, her husband, family physician Dr. Mark Rampton, assessed the medical needs of the area and the CSCA shipped two 40-foot semi trailers full of medical supplies to Uzhhorod as the medical situation there was “destitute.” They had a million-dollar grant from the Oregon State Department to fund this endeavor.

According to Politico, thanks to their position on the western border, cities like Lviv and Uzhhorod have become an area of refuge for those fleeing the war in eastern Ukraine. Rampton said Uzhhorod is “as far as you can get” from the danger.

According to the Council on Foreign Relation’s Global Conflict Tracker, this tension between Ukraine and Russia has been ongoing since early 2014. Though the two countries have been in a stalemate, threats of violence re-escalated as of spring 2021 and culminated in Russian President Vladimir Putin’s invasion on Feb. 24, turning the situation from conflict to all-out war.

Patients and refugees have turned to the western Ukrainian city of Uzhhorod for services after attacks across eastern Ukraine damaged or destroyed numerous civilian centers.

During a CSCA Zoom meeting on Feb. 19, residents of Uzhhorod offered their perspective on the situation. Over 70 people attended the meeting.

Pavlo Bilak, who served as interpreter and coordinator for the 2015 United Nations University delegation to Corvallis, called in from Kyiv, Ukraine’s capital city. He said the Russian army had amassed along the Ukrainian and Belarusian borders in order to put pressure on Ukraine as a country.

“For us Ukrainians, this is not new,” Bilak said. “We have been living more or less in this situation [since] 2014.”

Russia’s invasion is predicted to have a huge impact on democracy and diplomacy, and the situation has become globally relevant thanks to the recent escalations, Bilak said.

“The scale of [the situation], the hype around this invasion, is something new,” Bilak said.

Following Russia’s attacks on Kyiv, Bilak has evacuated to Uzhhorod with his family. Andriy Kurasov, another CSCA member, said in his opinion, Putin doesn’t believe Ukraine can or should be different from them. He said Russia wants many things from the U.S. and has tried to use Ukraine as a bargaining chip of sorts.

Kurasov compared Russia and Ukraine to a bear and a mouse, saying that things would inevitably get “bloody” if all-out war took place. He said there is “no excuse” for Russia’s invasion of any country and brought up the Budapest Memorandum.

The memorandum was signed in 1994 by the United States, the United Kingdom and Russia. The memorandum provided assurances against use of force or threats made to Ukraine; in response, Ukraine, Belarus and Kazakhstan gave up their nuclear weapons. Russia’s 2014 initiation of violence against Ukraine violated the terms of the memorandum, and their declaration of war has destroyed what semblance of peace remained between the two countries.

Since the war began, Vasyl Chubar, Uzhhorod resident and TOUCH director, has provided further updates via the TOUCH newsletters. Some of these updates have been summarized in The Daily Barometer articles.

Vlodymyr Dankiv, another Uzhhorod resident, said Ukraine has two main enemies: corruption within Ukraine and Putin. Dankiv said Ukraine’s failure to maintain and develop their army and economy has been an issue as well.

Anastasiya Cherkis, Uzhhorod resident and one-time CSCA exchange student, said the situation is extremely stressful for kids and teenagers in Ukraine, but Uzhhorod has a psychologist helping them at a local level.

“I’m just a mom, just a woman who is living with this, all these times,” Cherkis said.

“I know that my kids are asking, ‘Mom, what is going on? What are the Russians doing?’” Cherkis said. “Because every time they hear about the Russians, they are threatened.”

Marika Radetski, Uzhhorod resident, English teacher and former Uzhhorod CSCA president said she may not be panicking, but she is scared of what may happen despite the good news. She said it’s difficult to survive in situations like this. Despite everything, however, she said she is an optimist.

Despite the state of the war and COVID-19, there are many opportunities for Corvallis residents and OSU students to get involved with the CSCA and help the sister city.

Bilak said the U.S. has a lot of influence over the outcome with Russia and one way to help is by writing to U.S. congresspeople and asking them to show their support for Ukraine.

On Feb. 24, the Corvallis City Council approved a resolution to support Ukraine and Uzhhorod, and on Feb. 26 and March 5, Corvallis residents gathered outside the Benton County Courthouse in support of Ukraine.

The CSCA is working to set up a GoFundMe to assist Uzhhorod, and many other people and organizations have come together across the country to support Ukraine as a whole.

The International Rescue Committee is taking donations, as is Razom, GlobalGiving and Doctors Without Borders. All of these organizations are working to provide emergency supplies including food, water and medical care to the people of Ukraine.

As for involvement beyond the Russian-Ukrainian war, the CSCA is open to helping facilitate OSU students, faculty and others who want to connect with Uzhhorod, according to Rampton. Rampton said there are university connections available in fields from medicine and dental school to agriculture, business and more.

“It would be great for us to have an influx of new ideas, how to connect on the student body level,” Kokenyesi said. “We would welcome ideas, opportunities and participation.”

The TOUCH project, as part of the CSCA, works with children in Uzhhorod via five programs intended to sponsor and meet the specific needs of Ukrainian children in terms of education, disability support and more. They always value and appreciate sponsors and donors.

Bober said he would love to set up an event to watch and discuss American movies with OSU and UNU students, as well as other virtual activities.

Rampton said UNU’s Professor Ludmilla Symochka, who holds doctorates in biology and microbiology, would love to collaborate with someone at OSU on work related to biology, ecology, climate change or any other relevant field.