During war with Russia, the Barometer stands with Ukrainians 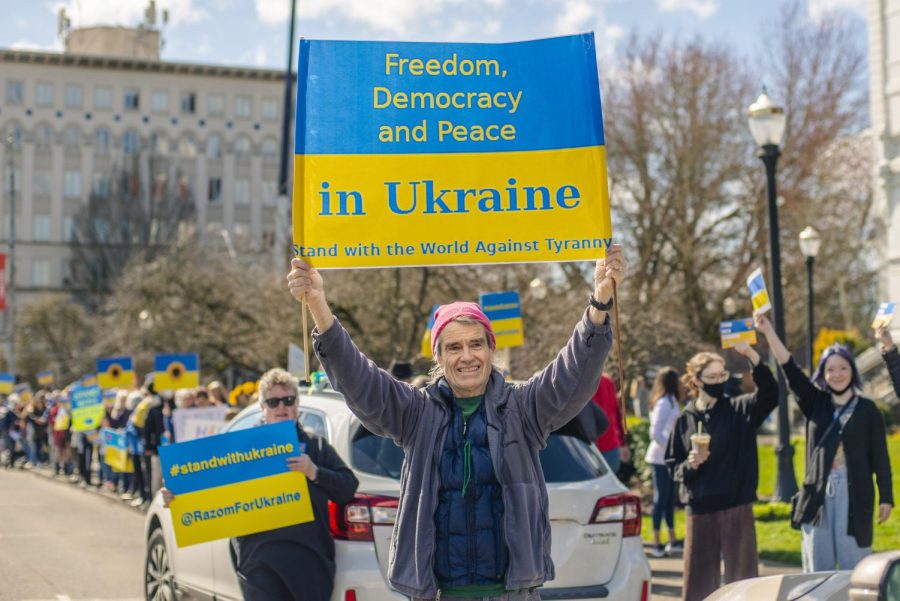 Albany resident, John Kolck proudly displays a sign that reads “Freedom, Democracy and Peace in Ukraine. Stand with the World Against Tyranny.” at a protest on Sunday, March 5. Kolck mentioned that while he is in Corvallis, Ore. protesting, his daughter is abroad in Berlin helping Ukrainian refugees.

As the citizens of Ukraine fight for the right to their own land, the loss of life at the hands of Russian imperialism is felt here in Corvallis, Ore., as many residents have ties to their Ukraine heritage, and Corvallis’ sister city of Uzhhorod.

Here at The Daily Baro, we are working to provide the honest, unbiased coverage that this moment deserves. We are in contact with residents in Ukraine who are on-the-ground, providing us with updated information as time progresses. Our cover story, written by Zeva Rosenbaum, goes into detail about the relationship between Corvallis and Uzhhorod over the years, as well as how Uzhhorod citizens have been holding up during COVID-19 and the war with Russia.

Our issue this month features photos of local Corvallis residents at two recent protests in front of the Benton County Courthouse. We have also made edits to our Daily Barometer nameplate in the upper left corner of the cover by coloring it yellow and blue to emulate the Ukrainian flag and represent our support for all who have been displaced due to Russian interference.

We recognize that Russia’s invasion on Ukraine is a move of power from administration, and that it affects the citizens of both countries in unique ways. According to the United Nations, approximately a million Ukraine citizens have fled from their homes into neighboring countries while young Russian soldiers have been tricked into fighting a war they did not anticipate.

While our support is with Ukraine, we want to make it clear that our support does not equal a desire for the war. We have seen the extreme violence and loss that comes from war, and while we cannot stop history from repeating itself, we can do our part to better support those affected by acts of violence.

If you would like to do your part to help Ukrainians across the globe, donations are currently being
accepted from organizations like Doctors Without Borders, Global Giving—who funded the Ukraine Crisis Relief Fund Page—the International Rescue Committee, as well as any other organizations currently working to ensure the safety of fleeing Ukrainian citizens. We have linked a list of other operating organizations in the online version of this story.

If you would like to be involved locally, you can subscribe directly to Corvallis Sister Cities Organization’s program, Take One Ukrainian Child’s Hand, for project newsletters with updates about upcoming protests and ways to get involved. The Facebook group “Corvallis Conversations” is also a forum for information used by many residents for promotion.