F-ck it, real talk: Why you shouldn’t worry about where you live 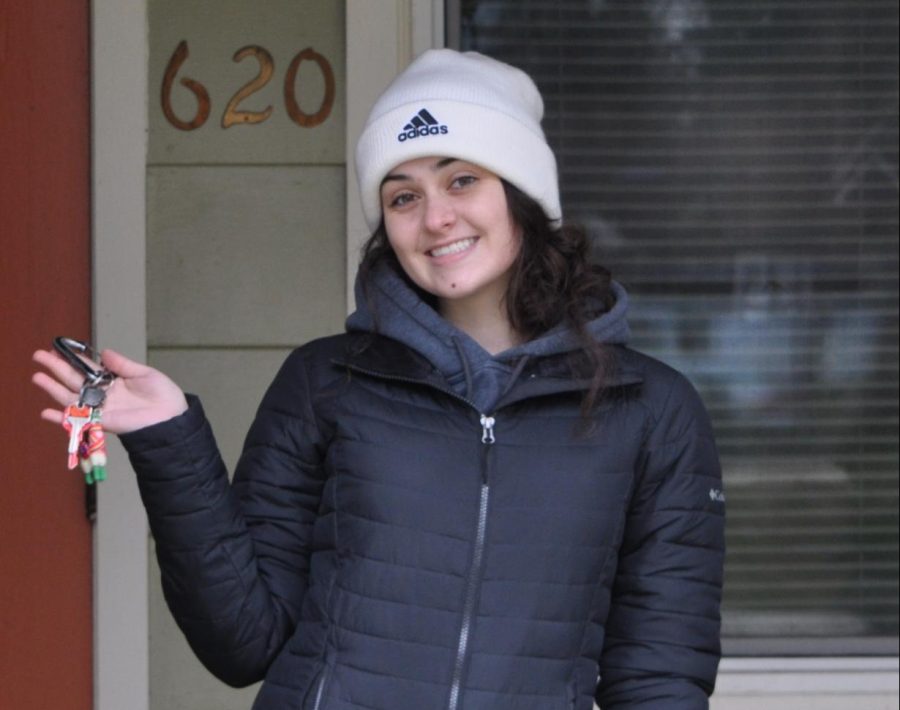 Kira Durham stands in front of a house on 16th Street in Corvallis Or, on Feb. 11. Durham damaged her relationship with her childhood best friend after living with them in the dorms, over sanitation concerns.

When starting college, the transition to living in dorms can be difficult for many Oregon State University students, but ultimately, only the students themselves will know what living situations are best for them.

Preferred living situations can vary greatly from student to student. Some like large groups of friends, some want to live alone, some need to live with strangers and some don’t know what they want.

Many first-year students who have never even lived away from home often find themselves worrying about what dorm to live in, how to pay the bills and who to live with.

What’s most important, though, is that each student follows their own intuition to choose a living situation that reflects what they hope to gain from a first-year experience at OSU.

Personally, I jumped into the dorms as a first-year student not knowing either of my two roommates. That worked out fine for me, but I didn’t become super close with either of them. Then, during the first part of the COVID-19 pandemic when we were all online at OSU, I recruited my friends to live with me. There have been ups and downs, but living with my friends has worked.

Living with strangers as a first-year student is something I don’t regret. While living with friends would have been nice, living with strangers forces one to be more lenient to other living styles. In my dorm, we never filled out any roommate agreement, nor did we make rules. We just minded each other’s space.

However, according to Kira Durham, a student majoring in animal sciences with a pre-vet option, her first-year dorm experience went poorly largely because of the vastly different ways in which she and her roommate lived.

“I remember coming back to my dorm, and there was a certain stench, and it wasn’t coming from my side of the room,” Durham said. “I turned to my roommate’s side of the room and found mold everywhere from old food that had been sitting around, from wetness that had been covered by plates, bowls, containers. [Betta fish] bowl was surrounded by moldy containers… I never would have pictured this person doing that since we were friends in high school… [Living together] put a big strain on our friendship.”

Durham’s experience reflects that of many other students and, for this reason, I think it’s best for first-year students to live with strangers in the dorm and only to live with friends afterward. This forces students to make friends while everyone else is trying to do the same. The dorms, after all, are known for new romances and friendships.

“I kind of became a homebody,” said Durham. “I didn’t want to go out because my friends were at home. I think I missed out on a lot of opportunities. I think it’s good to keep the separation of friendship and roommate-ship.”

While Durham’s experience only reflects that of one student, others students such as Thomas Kearney, a civil engineering major at OSU, have had similar experiences.

“I think you should live with people you are newly friends with, or friends with in general, because you can build and become better friends,” Kearney said. “But if you move in with best friends and you’re just unsure if you’re going to live together perfectly, if you have any doubt, you shouldn’t, because there is only downward to go from there.”

Living with friends doesn’t work for everyone, and COVID-19 further complicates these situations, but there’s no need to stress over living conditions. You’ll likely mess up but you’re also going to have good times. Everyone makes mistakes, but a lease isn’t permanent.

Calvert said he is even in a relationship with one of his roommates, and that his entire house was largely a bunch of strangers to him before deciding to move in with them.

Until next time. Safe travels.