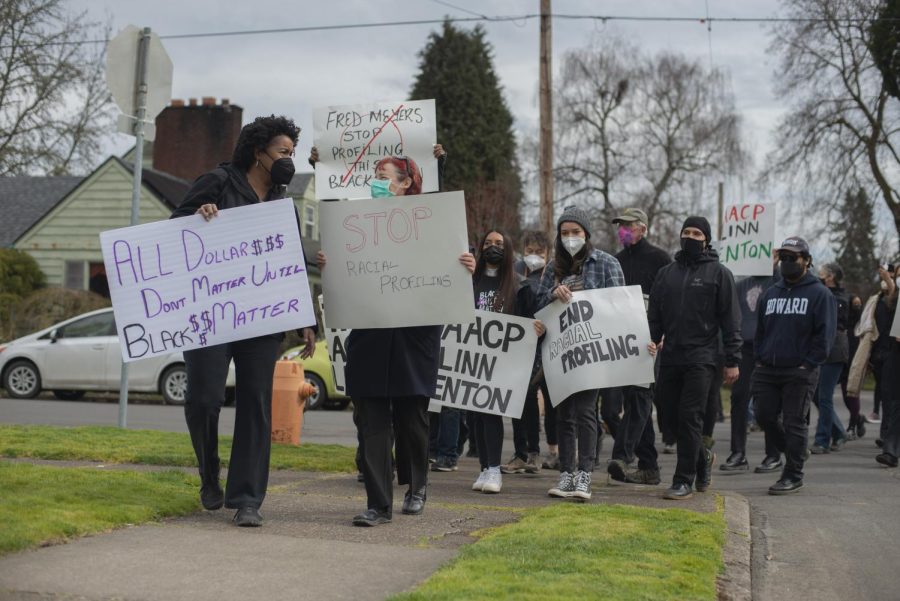 A group marches to Fred Meyer in Corvallis, Ore. on March 12 to end reports of racial profiling experienced by Black women at the store. Linn Benton NAACP has made a list of four demands to both local and national Fred Meyer stores as solutions to racial profiling.

Clarification: This story has been updated to clarify there have been reports of alleged racial profiling at the local Fred Meyer. An earlier version of the story did not say these reports were alleged.

The Linn Benton NAACP led dozens of people from Franklin Square Park to the Corvallis Fred Meyer on March 12 to protest  racial profiling local Black women said they have experienced in the store.

“All dollars don’t matter until Black dollars matter” and “No justice, no peace, no profit” were chanted during the march.

The reports of racial profiling were recounted in a press release sent out by NAACP on March 11. The women, who did not want their names used for fear of retaliation, described their experiences with the Corvallis and Albany Fred Meyers, which included staff refusing to take checks and being patrolled and surveilled by employees while shopping.

“[Fred Meyer], you have a responsibility to hit, what I like to call, a hard reset,” said Jason J. Dorsette, president of the Linn Benton NAACP, at the march. “Specifically, a hard reset that is inclusive, values all patrons, all customers, all shoppers, all citizens, all undocumented folk, all allies—everybody that spends money at your establishment.”

At the march, the NAACP laid out demands for Fred Meyer to complete by certain dates. The first demand asked that Fred Meyer publicly apologize to “all persons offended by the offensive behavior of the Fred Meyer staff” and publicly commit to adopting a nondiscriminatory customer service approach by March 16.

The second demand asked for Fred Meyer’s local and regional management to meet with Dorsette “to further discuss the issue of discrimination at Fred Meyer” no later than April 6.

During a gathering before the march, Dorsette said he had received an email from the regional manager of Fred Meyer asking to “meet and convene.”

In response, Dorsette said Fred Meyer was “a dollar late and fifty cents short.” Dorsette said he would not meet with the regional manager until there is a public apology to all persons offended.

“Our third demand: Fred Meyer must retain a local equity, diversity and inclusion consultant and/or organization to facilitate required workshops for shift managers and regional managers concerning bias, equity and inclusion,” Dorsette said. “This action should be completed no later than Wednesday, June 1.”

In the case the demands are not met, Dorsette said he will provide a teaser to what a boycott against Fred Meyer would look like.

Janie Tebeau, one of the speakers at the march and the second vice president of the Linn Benton NAACP, has been an Oregon resident for her entire life. Tebeau expressed that for a long time it was difficult to get Black hair-care products at other stores, and Fred Meyer carried them.

“But everytime you came here [Fred Meyer], you would get followed, and the section would be heavily surveilled,” Tebeau said. “I’m so tired.”

Sakina Hjerpe, another speaker at the march, shared that on April 27, 2021, she went to the Corvallis Fred Meyer to shop for her family. Hjerpe is an immigrant, and when she showed her federal ID to the Fred Meyer employee, they refused it. Hjerpe said when she asked why, Fred Meyer’s response was that the employee helping her “was having a bad day.”

“I am hungry, my children were hungry,” Hjerpe said. “Fred Meyer, you are responsible for all this, you’re responsible and I’m going to remind you again.”

Williams asked to speak to another manager, but he did not answer Williams’ question of why the self-check out employee was standing behind her.

“Maybe that was her job, to stand behind people of color,” Williams said.

Before adjourning the protest in front of Fred Meyer and returning to Franklin Square Park, Fred Meyer’s corporate office met with the group in front of the store.

Jeffrey Temple, director of Corporate Affairs at the Corvallis Fred Meyer, said they opened an investigation and held a team meeting this morning at the Corvallis and Albany locations to open up communications with their associates.

“We look forward to learning more about the allegations and understanding what happened,” Temple said.

The crowd was demanding a public apology from Temple.

Dorsette thanked everyone for marching and Temple for the apology.

“It’s not about allegations, right, it’s harm,” Dorsette said. “It has happened… These are real experiences that happened to real people.”

Dorsette said he looks forward to having a conversation with Fred Meyer, once he has seen the store publicly apologize in the news.