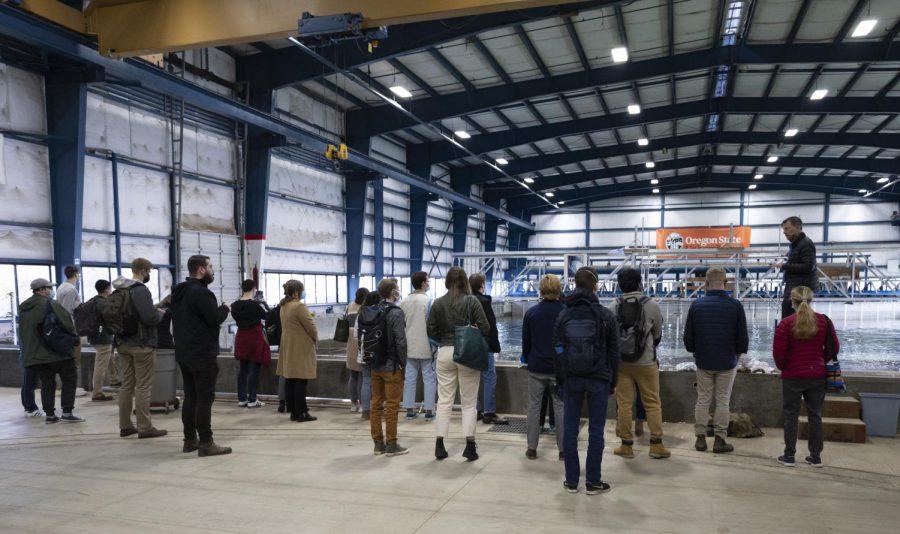 PacWave is an open-water testing facility for harnessing wave energy and is located off Newport, Ore. The facility is separated into two sites: PacWave North and PacWave South.

“PacWave South is designed for testing full-scale, potentially commercial, wave energy converters that deliver power from the site back to the local grid,” Hales said.

Wave energy converters take the power and energy produced from a wave and convert it into a useable form of energy, said Courtney Beringer, a doctoral student in coastal and ocean engineering at OSU.

“Wave energy is magnitudes greater than wind or the amount of oil we can extract,” Beringer said. “If we can figure out really efficient and clean ways to harness wave power, we can meet the demand of the growing energy crisis.”

According to Hales, the purpose of PacWave is to provide rigorous testing of wave energy converters in a fully energetic ocean setting.

“That’s the point of having [PacWave] in Oregon, in this location; there are extremely powerful waves and rough winters, so it’s a good place to test [wave energy converters], especially their durability,” Beringer said.

Back in 2008, Dr. Tuba Ozkan-Haller, acting dean of the College of Earth, Ocean and Atmospheric Sciences, helped form the idea of developing a grid-connected testing facility like PacWave.

“The fact that it is now becoming a reality gives me goosebumps,” Ozkan-Haller said. “The project is complex; we are building something that no university has built before.”

Beringer thinks that some of the biggest questions regarding the implementation of wave energy converters in coastal settings center around their business models and how the public perceives them.

In an effort to increase the recognition of wave energy in the United States, Beringer said the Pacific Marine Energy Center, of which OSU is a partner, employs lobbyists in Washington D.C. that educate government officials on wave energy while advocating for more research funding.

“The goal is that the wave energy converters are contributing to a [power] grid,” Beringer said.

According to Beringer, more testing needs to be done to find out what types of wave energy converters produce sufficient power in a cost-effective way to power grid systems.

PacWave South is currently under construction and, according to Hales, operations are expected to begin in the summer of 2024. PacWave South will be connected to the Lincoln County Proved Undeveloped Reserve energy grid and will be used to test the efficacy of wave energy to power a county-wide energy grid.

According to Ozkan-Haller, wave energy converters can be a useful tool to help combat the climate crisis, in addition to the more established forms of renewable energy such as solar and wind.

“Society will need to find ways to satisfy its energy needs through carbon-neutral means,” Ozkan-Haller said. “In Oregon, because of the size and ready availability of the wave resource, wave energy could play an important role.”