The Way of Things: An American game of cat and “Maus” 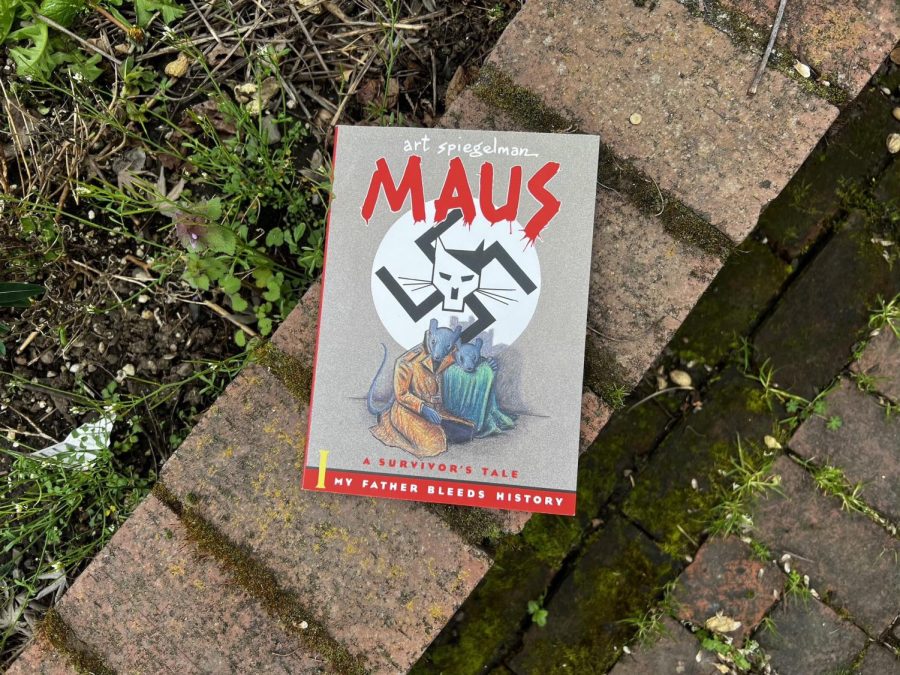 The book "Maus" by Art Spiegelman. The book was banned by a Tennessee school board in McMinn County in January.

The recent controversial banning of Art Spiegelman’s Pulitzer Prize-winning graphic novel, “Maus,” reminds us that the United States has a track-record of banning historically-relevant books and ignoring major world events.

A Tennessee school board in McMinn County banned “Maus” in January, citing curse words and nudity, despite the drawings being of mice.

“Maus” and “JoJo Rabbit” allow the Holocaust to be discussed with and presented to children while shielding them from some of the brutality that is too scarring for young minds. But even these more easily consumed media about the Holocaust are too much for certain audiences who seem to want to ignore the Holocaust.

“When you decide that you’re going to ban books that give students access to accurate historical understanding and historical narratives, you’re in a lot of danger,” Davison said.

Davison said it’s important to have a variety of Holocaust media besides common texts like “The Diary of Anne Frank” and Elie Weisel’s “Night” which, while they are “valuable” texts, leave out a lot of detail as to what exactly the Holocaust was and why it happened.

“To me, a professor of humanities, history is everything,” Davison said. “Without history, you have no context for anything politically. Think about how you construct yourself. What if you didn’t have personal history? You’d find yourself with something that’s just relevant to today.”

Davison believes “Maus” should be taught in tandem with other Holocaust media in order to have a variety of narratives and perspectives.

Books like “Survival in Auschwitz” by Primo Levi are the “ultimate penetration of truth” of what was done to prisoners in the concentration camps, according to Davison. Such visceral stories may not be appropriate even for high school students, Davison said, as it’s shocking even to college-age students.

While Germany has acknowledged its mistakes and aggressively removed Nazism from their culture, the U.S. has not done such a stellar job acknowledging their history with slavery, indigenous people’s genocide nor the presence of neo-Nazi and white supremacist communities across the nation today.

“Without the Holocaust, you can’t really understand all those others,” Davison said, “Because the term [genocide] itself was coined by a Jewish lawyer after the war to try to get a handle around what the Nazis did in pursuit of Nazi criminality. There was no term ‘genocide’ until that moment.”

Other attempts have been made to prove the Holocaust is revisionist history, Davison said. For example, David Irving sued author Deborah Lipstadt in the 1990s for libel after she referenced his works in her book, “Denying the Holocaust.” Irving was proven during the trial to be a poor scholar, racist and Holocaust denier himself.

Davison said we will likely see more Holocaust denial once the generation that lived through it dies out, as it’s easier to deny events, even such important ones, once eyewitness survivors are no longer alive to give testimony. However, Holocaust denial will never be substantiated, thanks to the wealth of documentation available.

As for presenting Holocaust media to younger audiences, Davison said he doesn’t think children in elementary and primary school should know all of the details about the Holocaust as it could “traumatize them” due to their impressionability. However, he said elementary-age children should be learning seriously about history and race, and the Holocaust should be included in that.

“I think the larger picture of the Holocaust should be step by step in the educational system, so when kids finally get to high school, they get a much more accurate discussion,” Davison said.

Books like “The Diary of Anne Frank” are suitable for younger minds but don’t stray too far into sentimentality, Davison said, but it ends on a note of optimism and he said it’s important for older readers to also consider consuming other Holocaust media because the Holocaust was not actually a story of optimism.

Anti-Semitism is a complex form of racism tied in with religious hatred, Davison said, and he and his children have experienced casual racism in day to day life, even in Corvallis, Ore. But for the most part, Corvallis is not an anti-Semitic town, he said, and people tend to be more ignorant of who Jewish people are than being outright “Jew-haters.”

“Anti-Semitism is so pervasive in the western mind that it’s always there, but it gets discredited, especially nowadays, as an important part of racism, because there’s no color-line and Jews are white in terms of socioeconomics and politics,” Davison said.

Sofia Isias-Day, Corvallis high-school student and member of the Beit-Am Jewish community, said the community members have held discussions on how to deal with an active shooter, and the building even has a hidden shelter in case they have to hide. All precautions feel necessary thanks to the very real presence of anti-Semitism in the U.S.

Isias-Day pointed out that while “Maus” is filled with intense and upsetting issues, so are many other classics, including classics written by white Christian men, which have not been banned.

“I’ve been to Yad Vashem, I’ve felt that pit in my stomach of suffering when you see their names and faces. I’ve heard the stories straight from the lips of the survivors,” Isias-Day said. “It’s difficult. It’s painful. But it is necessary.”

Yad Vashem is the World Holocaust Remembrance Center in Jerusalem, Israel. I myself visited there as a teen, and while I was young enough that I didn’t absorb everything I would have as an adult, there’s no denying the horrors of the Holocaust when they’re staring you in the face in the form of bins of shoes, rings and memorabilia from the countless victims of this genocide.

A 2018 article from NBC News discussed a study showing that one-fifth of millennials and 11% of U.S. adults surveyed had never even heard of the Holocaust, while the Anti-Defamation League showed a staggering 57% spike in anti-Semetic incidents.

These concerning statistics are not helped by the banning of books and media that address uncomfortable topics. While the “Maus” banning had the opposite effect of re-popularizing the book and shooting it back up to number one on the sales charts, it’s not the first culturally important book to have faced suppression, and it likely won’t be the last.

Davison said he recommends “The Last of the Just” by André Schwarz-Bart, “Night” by Elie Wiesel, novels by Primo Levi, the diaries of Saul Freelander and “Tzili” and “Age of Wonders” by Aharon Apfelfeld, as well as the films “The World at War,” “Europa Europa,” “The Quarrel” and “Fateless.”

OSU also holds an annual Holocaust Memorial Week, typically in the spring, with many speakers and educational resources that would be valuable to anyone hoping to educate themselves on the Holocaust and Jewish culture and history.