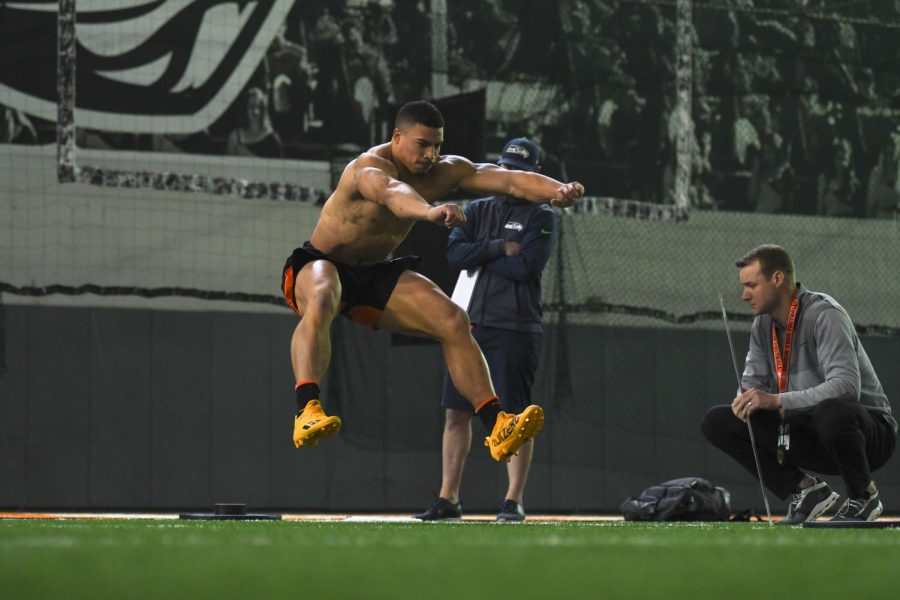 Linebacker Andrzej Hughes Murray is seen taking part in the Beaver's NFL Pro Day events inside of the programs football facility on March 31, 2022. Hughes Murray was a captain of the Beavers football team during the 2021 season.

This past Thursday, scouts from NFL teams from all across the country came to Oregon State University to see the Beaver’s best players show off their skills for them.

While their trials aren’t over yet with the latter half of April possibly seeing some of these players being tested by individual teams on their fields, this is another chance to sell themselves.

In total, six players were showcased, including tight end Teagan Quitoriano who participated in the NFL combine in early March. Alongside Quitoriano was running back B.J. Baylor, linebackers Andrzej Hughes-Murray and Avery Roberts, as well as cornerback Elijah Jones.

“I’ve definitely tried to focus on my mobility and my nutrition,” Quitoriano said. “And [to] just come out here with a little bit better body composition and show some more quickness than people are used to seeing, which has been my goal.”

According to Quitoriano, he will be spending the upcoming draft day— set to be in late April— with his family in Salem hoping for the best.

For Roberts, he said that his preparation for the Pro Day wasn’t football training so much as track.

“It’s a little different going from kind of a team mindset, to now you’re kind of focusing on you and yourself as a specific athlete,” Roberts said.

According to Baylor, he is planning more to just go with the flow when it comes to training between Pro Day and potential examinations from scouts next month.

“Whatever happens, happens for a reason,” Baylor said. “I talked about coming to Oregon State from Texas and just you know because I wanted to get away from home… the people [here] they just like to see you succeed.”

One thing that Hughes-Murray and all of the other players did in preparation for this event was dieting. According to him, he struggled with dieting in the first few weeks of preparing because it was his first time dieting.

After Pro Day ended, Hughes-Murray’s priority was to get a hamburger and fries right after the festivities were over.

“Yeah, I got everything in. I’m gonna get me a hamburger and fries.” Hughes-Murray said. “I don’t know, yet [where he planned to eat]. But somebody is going to get my hard-earned dollars.”

While dieting and training for this day may have been necessary to perform at their maximums, according to Hughes-Murray and the other players, this was also the official end of their college football careers.

“My best memory is just all the great guys that I played with,” Hughes-Murray said. “I got to see a lot of guys grow, I got to see guys have kids— get married. I got some lifelong friends like Avery [Roberts] for example.”