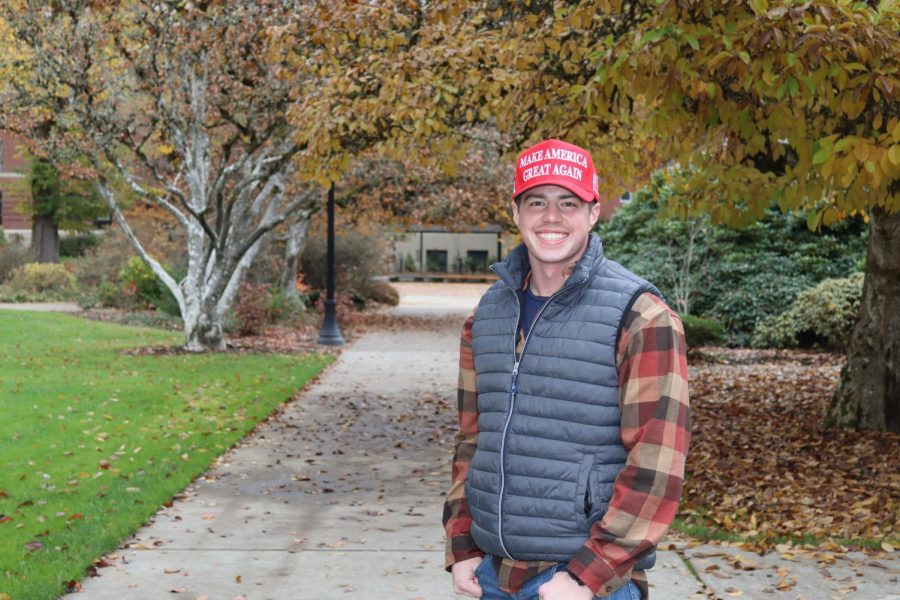 Member of College of Republicans Matthew Edwards is pictured outside of the Memorial Union. He can be seen smiling and proud to be American, no matter the stratification of American politics.

As someone who is a registered Democrat and considers themselves very left-leaning, I feel pretty welcome in Corvallis and at Oregon State University. I don’t often worry what others will say about my political affiliation, and I feel like our city and university share many of my values and ideas (especially compared to the small, red town I grew up in).

But how do others in our community feel? Do they feel accepted for how they identify politically — or ostracized when their ideas differ?

Matthew Edwards, who is president of the OSU College Republicans, when asked if he felt accepted as a conservative Republican said, “I would say yes and no, I think it depends on where you are. I think some people in the community are welcoming of it and some people aren’t.”

As a club, Edwards said they do not get a lot of support from the university or community in comparison to other clubs, like the College Democrats. In some cases, Edwards said he has experienced hostility from the OSU community for his differing political views.

For this to change, Edwards said, “I think one thing that will help is maybe understanding where everyone else is coming from. I think a lot of times there’s a misperception of people that are conservative, especially for college students.”

College students tend to be quite polarized across the United States. In a 2017 study of the political affiliations of college freshmen by UCLA Higher Education, 35.5% of the 137,456 that responded considered themselves liberal or far left, 22.2% identified as conservative or far-right, and just over two in five reported being nonpartisan.

Edwards said he feels that letting situations become hostile only worsens the gap between political identities.

“I think when you get to know people and get to talk with them one on one it helps a lot more than shouting across the aisle,” Edwards said.

Edwards thinks the local area is tolerant of all political views, and when the OSU Republicans club was revived, he felt generally supported by the community.

Tamra Cluff, president of the College Democrats, when asked if she felt welcome in the community for her political affiliation said, “Yes! I feel like by nature of being in a university space, liberalism is pretty widely shared and promoted. Even for someone who is more leftist, there are plenty of spaces for me to explore my political ideology and discuss issues.”

Like Edwards, Cluff believes that discussions with the other side are important.

“I believe that it is important to have discourse about differences in political ideas and I want OSU to be a space for that,” she said. “Last year, for example, I really appreciated the debates that OSU College Democrats had with OSU College Republicans. Those opportunities helped broaden our perspectives and encouraged more productive conversations. I feel that bipartisanship can be beneficial in that way.”

Cluff said she feels like the community is generally accepting of all political beliefs, other than those that are hateful or discriminatory.

Dawson Hughes, a member of the Young Democratic Socialists Association at OSU, noted how important it is to consider privilege when discussing how welcome he feels in regard to his political affiliation.

“For the most part, yes I do feel welcome at OSU,” he said. “It is important to note, however, that I am in a privileged position as a straight white guy. Just because I feel welcome at OSU and in Corvallis does not mean that everybody feels welcome.”

For those who are less privileged in the community, Hughes wants to see more active political change on the university level in order for them to feel more welcome and accepted.

“For some of my friends to feel more welcome, I would like to see OSU not move forward with the implementation of their on-campus police force with the exception of the minimum requirements of the campus nuclear reactor,” Hughes explained. “Corvallis is very over-policed. Our city has the Corvallis Police Department and the Benton County Sheriff’s office, plus campus public safety officers. More cops on campus will not create a welcoming environment for students.”

Like Edwards and Cluff, Hughes does consider Corvallis and OSU to be generally accepting and welcoming of all political views.

In my personal experience, I’ve always felt welcome for my political views, and I expected more right-leaning individuals to feel differently in Corvallis and at OSU. I was surprised to learn that this was not always the case. It makes me wonder just how liberal our area really is, or if I, as a student of what I would consider a left-leaning university, just don’t know as much as I thought I did about off-campus life.