What this win means to a life-long Beaver fan (Column) 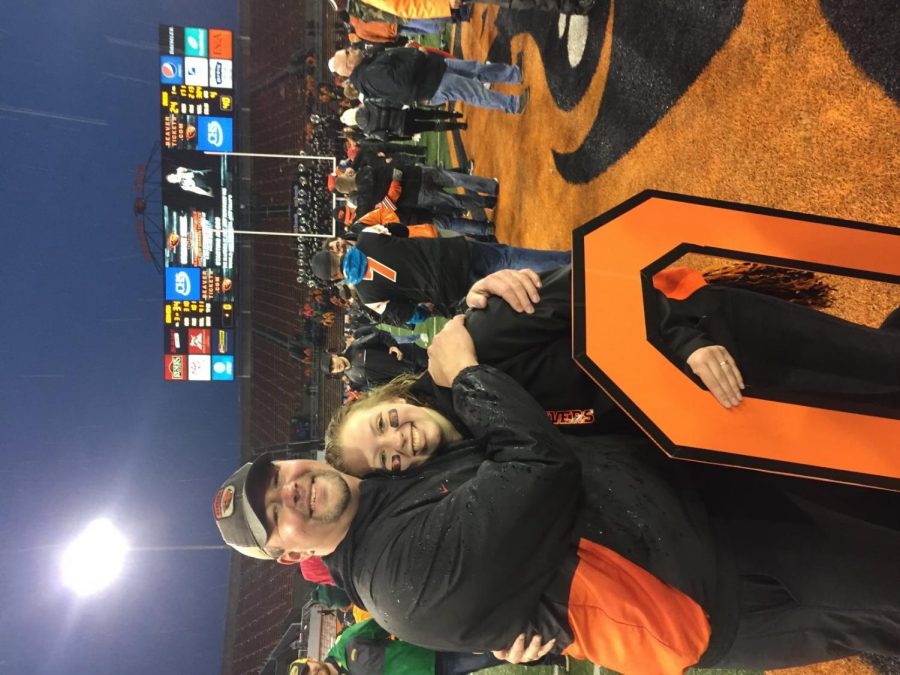 I have been a season ticket holder to Oregon State Football since I was three years old.

When my dad couldn’t make the games, he would give away our tickets under the caveat that our friends would take me with them on the four-hour round trip drive for the game. I wanted to make every game possible.

I have been to several away games. Watched the eight-year drought of losses to Oregon. Returned year after year with the hope that this season will be different, and fully believing it too.

My first season as a student ended with the win over the Ducks in 2016. I sat front row, 50-yard line and rushed the field. I met my dad on the field when it thinned out and we hugged out of the pure joy of ending that eight-year drought.

It’s been a tough few years. Minimal conference wins, losing records. My last game as an undergrad was the win over Arizona State in 2019. We rushed the field, even though maybe we shouldn’t have.

But it all leads up to this moment, this exact moment where we watch and wait on the edge of our seats for the clock to hit 0:00 and the ‘W’ to be by our names. And it happened. Not only did it happen, but it ended with the odds stacked against us. Missed calls by referees, avoidable injuries, all down to the final seconds with a fumble recovery to secure the win.

But it’s not the way I want. I want the crowd. I want to be standing shoulder to shoulder, once again, front row, at the 50-yard line with my friends. I want to feel the roar of the crowd at that final touchdown. I want to shiver in the 36 degrees cold and yet feel warmed from the inside with the hope of defeating our rivals against all odds.

Minutes after the game, I had an out of body experience. This was the first season in 20 years that I have not been able to sit in Reser Stadium and cheer on the Beavers. It was one of the best victories I’ve seen from the program that I can remember. As a graduate student in my fifth and final year at Oregon State, I wanted to end it on that field.

We would have rushed that field. It would be a new level. It would be like the 1998 win over the Ducks, with the crowd nearly pressing onto the field before the game even ended. The crowd would be on the field the second that fumble was recovered, before that clock hit 0:00, celebrating our team and being together. Simply together.

COVID-19 has brought many heartaches and missed moments. We wait anxiously, hoping for more peace and safety to come to all. We will look back and our hearts will ache for the moments we cannot get back. This one’s mine.

Scrolling through social media, not even in Corvallis for the game, even the thought of parades and honking and shouts of joy made my heart hurt. But then I started to think about if we were all there, in person, how infinitely awe-inspiring it would be.

I picture us all waiting, gripping the frozen concrete in our hands, screaming through iced lungs and holding hands with our friends out of anxiety and the need for their warmth. And then that fumble. Eruption. A sound like Reser has never heard. And then a wave, everybody clambering down as fast as their bodies can carry them to share in the joy on the field.

Chants, cheers, the Spirit of OSU playing the fight song and every voice screaming along to it. Players hoisted upon our shoulders. Even goal posts coming down to celebrate the first win over an AP-ranked team since 2014, the second win in 12 years against our rivals and the best series win since before the turn of the millennium.

Nearly an hour later, as it would take that long at minimum for the crowd to begin thinning, celebrations would break out all over Corvallis. I know many, including myself, would end up at Clods, celebrating over a Two Towns or a beer with cheers and laughter and screams of “Go Beavs” all throughout the streets and houses and bars.

It hurts, not just because I want to be there, but we are missing the physical community that makes any win, especially a rivalry win, something special.

But if we can’t be there this year, at least we don’t have just hope anymore. We have a fire. This win shows the potential, the turnaround we’ve been waiting patiently for and found with Jonathan Smith.

So what does that mean? I have more than just hope. I have confidence that the next time we fill Reser to watch these two teams battle it out, the Beavers will win once again. The team will not soon forget the feeling running through their veins tonight and will want to feel it again– this time with the power of Beaver Nation in their corner.