The Daily Barometer • May 2, 2022 • https://dailybaro.orangemedianetwork.com/16562/city-daily-barometer/heartland-woofstock-event-showcases-animals-as-adoption-rates-fall-after-pandemic-peak/ 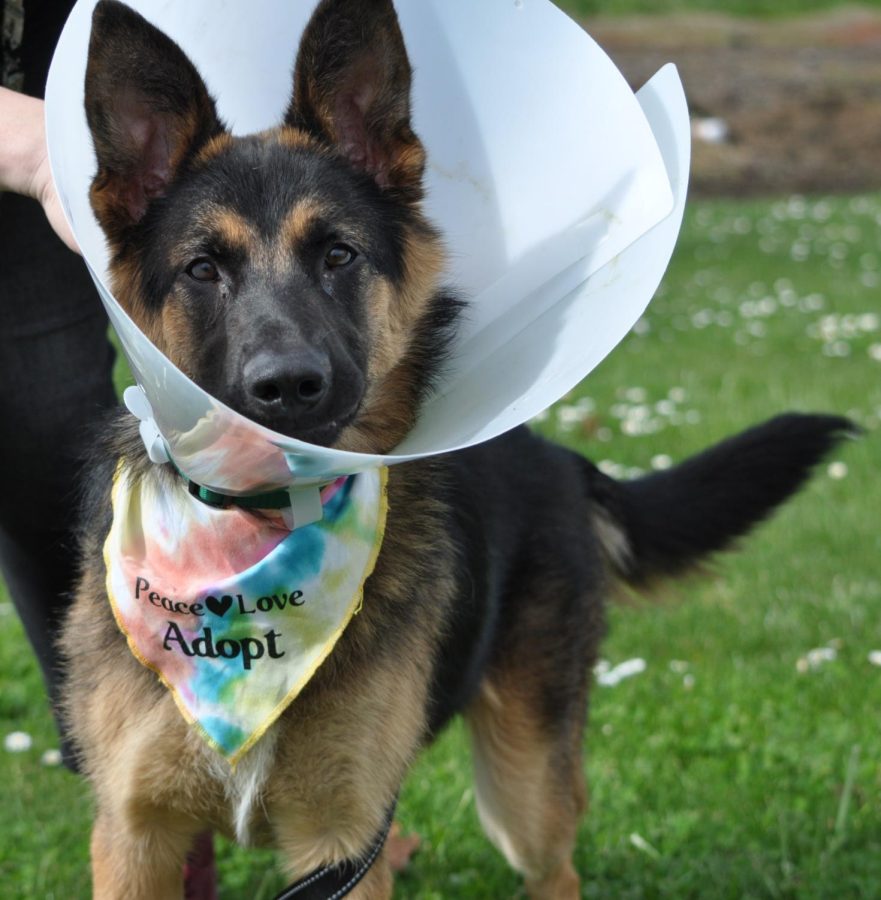 Starlight the dog is pictured in a field near the Heartland Humane Society in Corvallis, Ore. on April 8. Starlight is in a cone because she was recently spayed, one of the many services the Woofstock event raises money for Heartland to do.

Our furry friends have supported us through the pandemic—now it’s time to don tie dye and bell bottoms to support them at the Heartland Humane Society’s ‘60s-themed Woofstock fundraiser.

After adoption rates have leveled off since the height of the COVID-19 pandemic, Heartland’s premier fundraising event will take place on May 21 at 6 p.m. The $85 tick- eted event will start off with showcasing and engagement activities with adoptable pets before moving into the auction and dinner portion of the event.

According to Emily James, Heartland’s resource development director, this is the 19th annual spring fundraising event. The event has evolved over the years from an art auction in the CH2M Hill Alumni Center on the Oregon State University Corvallis, Ore. campus, to an interactive auction, dinner and engage- ment event being held at the Benton County Fairgrounds for the first time this year.

In 2020, 7,204 animals were adopted from the Oregon Humane Society. This number stayed at a consistent rise throughout the pandemic, but these rates are starting to fall again.

“We’ve seen the rapid peak of adoptions at the peak of the pandemic,” James said.

As the pandemic has gone on, however, James said the number of animals Heartland cares for has gone down to pre-pandemic levels, with the adoption rate lowering as well.

“I think people’s priorities are changing right now and maybe they are not looking to bring a pet to their home, but there are still animals who are looking for homes,” James said.

Second-year Oregon State University political science student Arnez Madison was one of the people who adopted during the pandemic but then was unable to keep the pet as time progressed.

“I decided to adopt a pet because I didn’t want to go buy one, that was the main reason,” Madison said. “Also, I just felt like having a dog, it’s cool.”

The boredom of the pandemic was one motivator to get an animal, according to Madison, and the cost of a shelter pet made more sense for a college student’s budget. As life returned to a more normal pace, however, Madison had to give his dog up to adjust, because it was too time-consuming.

James said the ability to predict adoption trends has also become more difficult with the pandemic.

“It is kind of unprecedented, I would say before the pandemic we were able to predict trends and say ‘We’ll have this many animals at this time of year and this many adoptions,’ but these past couple of years have been unchart- able,” James said.

This appearance of low adoptions but increased shelter needs is a trend across the state of Oregon according to Laura Klink, the Oregon Humane Society’s public information manager.

OHS works with many shelters across the state, though each shelter is run independent- ly, they typically partner with those around them for shared resources or animal transfers—when animals are not being adopted in one place, they can be moved to another with the hope of having a better shot there.

In 2021 and 2022, adoption rates remained strong in some areas but the help shelters need to support the animals in their care has significantly decreased, according to Klink.

The lack of animal welfare professionals has been a long-coming struggle, according to Klink, but like many other problems, came to a head during the pandemic. As a result of limiting COVID-19 exposure, many humane societies put spay and neuter surgeries on hold, creating more barriers for pet owners to keep animals without the support of these clinical services.

“I think we are playing a little catch up now,” Klink said. “I think once access to spay and neuter is brought back to some communities, [that will help].”

OHS is looking to open a new community veterinary clinic in Oregon later this year to help provide services on a need-based scale to help fill in some of these care gaps for both shelters and already homed animals.

Klink and James said that there is a big movement in animal welfare to keep the animals in their homes, in part by making care for the animals easier.

Part of that, Klink noted, is through making pet-friendly housing available in Corvallis. Madison said he experienced issues with housing that informed his decision to give up his adopted dog earlier this year.

According to James, here in the Corvallis area, there is a large population of stray animals not being picked up by their owners. In response, she urges people to check with shelters if a pet goes missing.

The best advice, according to James, is to look for a pet that fits the qualities you are looking for and consider shelters as a resource.

“Really think about what you are looking for and what you can provide and try to find a pet that aligns with those qualities and priorities,” James said.