The Daily Barometer • May 2, 2022 • https://dailybaro.orangemedianetwork.com/16568/daily-barometer-news/students-report-caps-understaffing-issues-high-demand/ 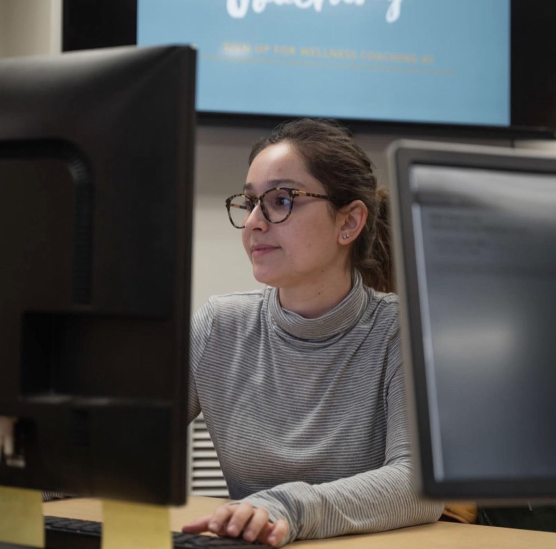 Samantha Giaimo, trained peer and Student Resource Staff member at the Wellness Nook associated with CAPS, working at the front desk in March of 2020. CAPS is currently experiencing high demand from students and refers students to resources if they are unable to get an appointment.

According to Draken Reeves, OSU student and editor-in-chief of DamChic, he first reached out to CAPS early in the spring of 2021 when he found out he was going to be the editor for DamChic during the next academic school year. DamChic is a fashion magazine under Orange Media Network, which The Daily Barometer is also a part of.

Reeves said he was being precautious and decided to join the waitlist early since he knew the waitlist for CAPS was long. According to Reeves, he was told to wait until the next academic year, in the fall of 2021, to get an appointment at CAPS.

In the fall, Reeves said he signed up during the first week of school and was waitlisted for 10 weeks before CAPS reached out and asked if he was interested in renewing his waitlist.

“By the time that those 10 weeks were done, a lot of my issues had either gotten worse, or they were just different issues that I had to deal with on my own,” Reeves said.

After Reeves was waitlisted by CAPS, he said he started looking for therapists outside of OSU. However, Reeves was told that most therapists were booked for about six months.

According to Ian Kellems, director of CAPS, CAPS has been impacted by the inadequate national mental health treatment system as well as an effort to reduce stigma on campus and encourage students to seek out help for mental health counseling.

Kellems said this has created an increase of demand in services that has resulted in a long waitlist for ongoing counseling appointments.

However, CAPS does offer other services that do not typically have as long of waitlists, such as single-session clinics–which are typically available within a week–workshops around mindfulness and other emotional coping skills, and groups that have openings and are available for students.

According to Kellems, CAPS was also granted permission to purchase a contract with an app through the MyStudentSupportProgram, so students can access a counselor 24/7. The app would enable all students to chat in real time or video call a counselor, and access educational materials for stress management, mindfulness exercises and information about depression.

Kellams said the advantage of the app, as opposed to hiring more therapists, is that it provides 24/7 coverage to service the volume of students requesting services, as opposed to having 20 therapists for all students waiting for an OSU counselor.

“We have been hearing from students that the wait is a problem, and so this is what we are doing to try and address that,” Kellems said.

According to Kellems, CAPS currently operates on a triage system that allows counselors and therapists to assess students and what can best help them, based on who needs assistance most.

“It is really really disheartening to have campus and the university in general to say ‘Reach out if you need help’, and then the resources are not given enough support,” Reeves said.

Sydney B., a third-year transfer OSU student, said she heard about CAPS leading up to her first week at OSU during START orientation.

“I remember, several times, being told that the spaces fill up really fast,” Sydney said.

According to Sydney, she went in person to the CAPS facility with a high level of distress and was seen by a counselor right away.

Kellems said what constitutes a crisis is the student’s level of functioning. A student is considered to be in crisis, according to Kellems, if they are having suicidal thoughts and/or their level of distress.