The Daily Barometer • May 2, 2022 • https://dailybaro.orangemedianetwork.com/16584/daily-barometer-news/dam-jam-takes-new-shape-as-plaza-palooza/ 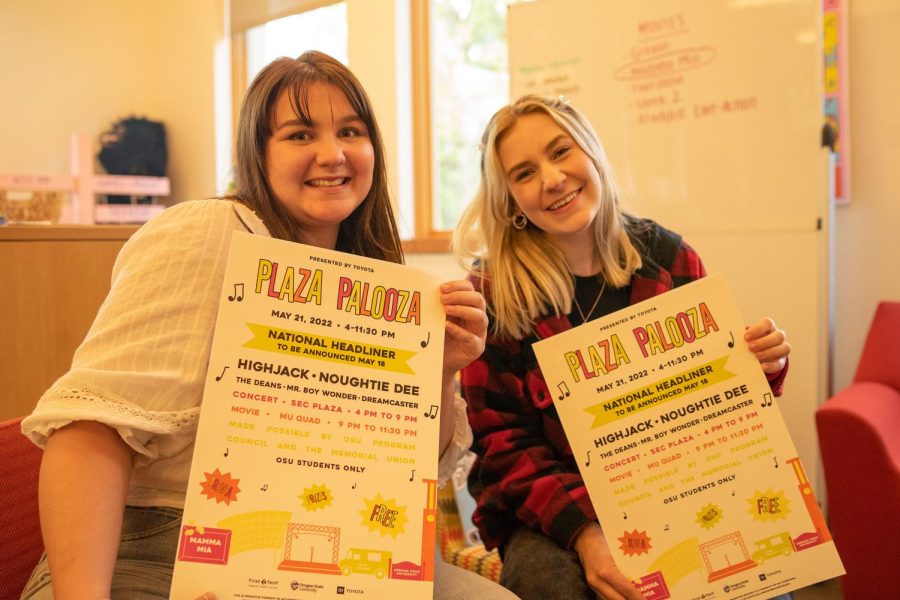 Autumn Simmons, a fourth-year student and lead event coordinator of OSUPC (left), and Kenna Reid, a third-year student and Dam Jam lead planner at OSUPC, display Plaza Palooza posters during an event planning meeting in the Student Experience Center on April 27. Plaza Palooza is the new name for what used to be Dam Jam, but Plaza Palooza will also look very different from how Dam Jam has in the past.

The Oregon State University Program Council has reworked the annual event known as Dam Jam to a new festival-like event due to concerns within administration.

Major concerns that will prevent Dam Jam from happening as it has in previous years include staffing capacity, a lower budget and concerns over community impact.  These were, in part, fueled by difficulties coming back from the COVID-19 pandemic.

Instead of the ticketed Reser Stadium Dam Jam, Plaza Palooza will take place on May 21 at 4 p.m. in the Student Experience Center Plaza on OSU’s Corvallis, Ore. campus.

“We have been planning like crazy, we have been making this new event and honestly, I am more excited for it and I think it will be amazing,” said Kenna Reid, the Dam Jam lead planner at OSUPC.

The concert portion of the event will run from 4 p.m. to 8 p.m., where there will be five student performers—including solos and groups—with the winner of Battle of the DJs, Rob Altman, going on directly before the headliner.

Battle of the DJs was an event hosted by OSUPC earlier in the year, which Plaza Palooza will mirror in its set up of a full concert stage and lights in the SEC plaza.

“I am really excited, I’ve never done something quite this large before so it’s definitely a challenge I am looking to approach,” Altman said. “Everytime I do something like this, it helps me build a little more character, helps me work on myself—like self-esteem—and also practicing the skill in general.”

Autumn Simmons, a fourth-year student who has worked at OSUPC for four years as lead event coordinator, said they hope this event will be more open to all students as the music element will showcase a variety of styles and be free of charge.

“It’s a celebration, we’re almost done with the school year and it’s really exciting, so it’s more of a festival-feel than Dam Jam,” Simmons said.

There will also be games and food trucks in the Memorial Union quad throughout the event. After the concert portion, there will also be a movie and Kahoot trivia with prizes and free food in the quad.

“We had Dam Jam and that was really fun, but now we are coming out of a pandemic and things have changed a lot and we cannot stick to the same events we have been doing,” Simmons said.

According to Reid, the headlining artist will be announced publicly only a few days before the event.

“Since it is an ungated and unticketed event, we want to limit the amount of the performers’ outside fans that don’t go to OSU and people from Portland, Ore. or Eugene, Ore. from traveling—making sure it doesn’t get too out of control, we are really trying to gear it towards OSU students,” Reid said.

The shift has been very difficult for the student coordinators, causing them to consider canceling the event altogether.

“We felt really defeated in that moment,” Reid said. “After talking a little bit more, we were like, ‘Okay, we have a budget to do something really cool here and we don’t want to just give up.’ We bounced back and have been able to work as a team and make this really cool event.”

The biggest struggle the team still faces, according to Reid, is attracting older students who have experienced Dam Jam and might compare it to Plaza Palooza, as well as advertising the new event and name.

“The name does not hold the value of the event, it is the event itself that students can connect to,” Simmons said.

“As bummed as we were at first to find out Dam Jam wasn’t going to be happening as we planned it to, I think this is a new event we have been able to put our creativity into,” Reid said. “I think it will honestly target a lot more students and be a fun springtime event and a fun way to end the school year.”

Plaza Palooza is not confirmed to be an annual replacement for Dam Jam but Simmons hopes there will always be an event that has the element of music continuing on after her time at OSUPC.