The Daily Barometer • May 2, 2022 • https://dailybaro.orangemedianetwork.com/16599/daily-barometer-news/senior-art-exhibit-to-feature-work-from-osu-students/ 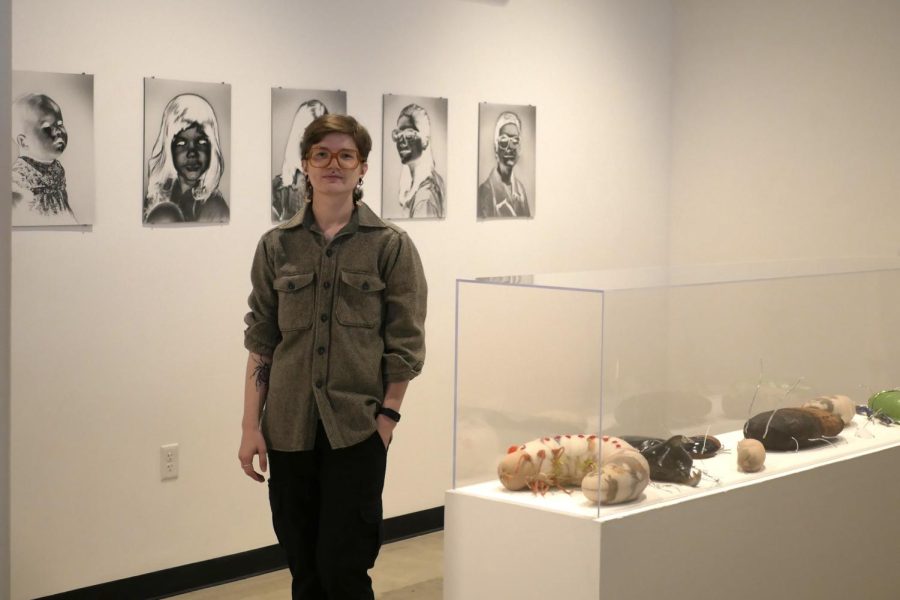 Lee Niemi, a studio art major, presents his work and artist statement in the Senior Art Exhibit on April 13 in Snell Hall. He aims to share his experiences being trans through themes of transition and memory as a sculptor and photographer.

As they conclude their time at Oregon State University, Marta Nunez, Robin Weis and other graduating seniors at OSU will display their work at the Senior Exhibit as they begin their professional art careers.

For the first time in two years, the OSU Senior Exhibit will be shown in person at the Benton County Historical Museum on Second Street. This exhibit will show the work of seniors who are graduating with a Bachelor of Fine Arts from the OSU Arts Program.

Kerry Skarbakka, associate professor of photography, is helping put together the art show, which will happen from 10 a.m. to 4:30 p.m. Wednesday through Saturday and noon to 4:30 p.m. on Sunday. The exhibition will open on May 19.

“The senior exhibit is the end of the year celebration of our graduating BFA students,” Skarbakka said.

According to Weis, an artist whose work will be featured in the exhibit, it also helps prepare the students for life after graduation.

“It gives you practical skills,” Weis said. “Not only will you be released into the art world, but you’ll have to know how to communicate with each other. And also the logistics of hanging the show and thinking about what each piece of artwork needs for installation.”

According to Nunez, another artist whose work will be featured, the exhibit is a way to increase representation of her identity through art.

“I’m one of the few Brown students in the class, so for me to put my artwork and take up space, it’s important for me to represent being Latina, Mexican American,” Nunez said.

This exhibit will show different types of art, from sculptures to photography and many mediums in between, to the general public.

“I think it’s a good way for people to see what students are thinking about in this program, and then also other students to think about how their backgrounds might be able to be useful to help build more of a structure for what OSU is known for in the arts, at least for the visual arts,” Skarbakka said.

Strengthening the community around art, Weis said, is important for the student artist.

“We have a lot of pride in the sense of community that we get from doing our practice at college because the thing about artists is, it’s shared space and you’re so close to each other that you develop a special type of kinship with the practice and the art that your other folks are doing around you,” Weis said.

Nunez said students should attend the exhibit to also see the student artists’ potential. According to Nunez, she believes people will be intrigued by what the students can do.

“It lets them know that the things that we feel and think and deal with, we’re not alone in, and that there are people out there that are actively trying to create works of art that address very important things out there as well,” Skarbakka said.

According to Skarbakka, students are showing their ability to marry the aesthetics of works while creating powerful art pieces that prove that they are the next makers and movers of the art world. This, Skarbakka said, along with the collective consciousness of the student artist at this time, are what the event is going to present to the public.

The Joan Truckenbrod Gallery opened May 1 and is hosting an open invitational for all art majors, including BFA graduates. Another event, Outpost 1000, is open to core studio students, new or continuing students in the art program. The Corvallis Arts Walk will also be taking place on May 19, from 4-8 p.m.