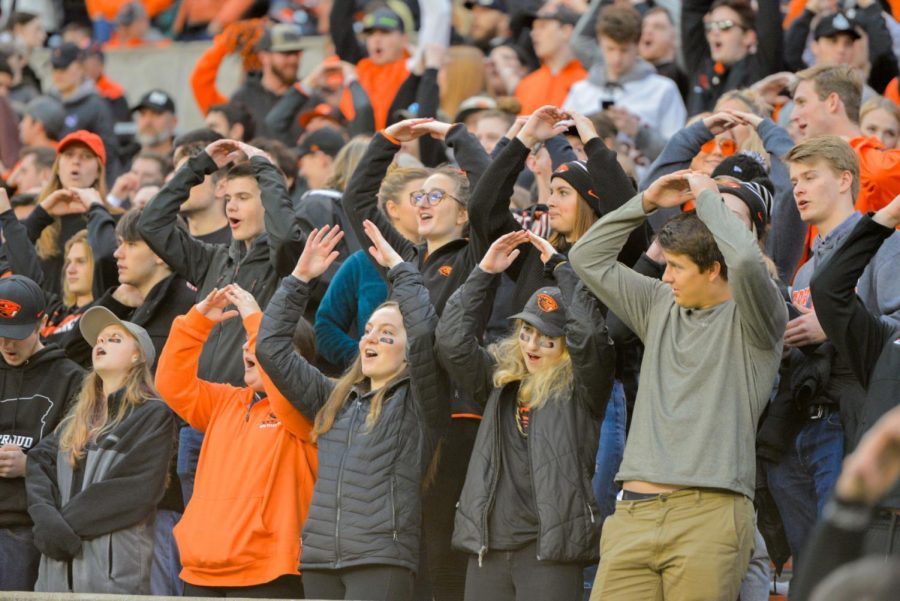 In this file photo, Students participate in the O-S-U chant in the student section in Reser Stadium for OSU Football's senior night versus Arizona State on Nov. 16, 2019. The Beavers will be back in Reser Stadium on Nov. 27 against the rival Oregon Ducks, hoping that their upcoming meeting ends the way their game in 2007 went.

On Nov. 28, the Oregon State Beavers’ football team will face off against the rival Oregon Ducks– in a game that the Beavers will hope ends similarly to a meeting the two teams had over a decade ago.

In 2007, the 7-3 Beavers traveled to Eugene to face the 17th ranked Oregon Ducks, looking for their first win at Autzen Stadium since 1993. Faced with a raucous crowd of 54,000, that win wouldn’t come easy.

Oregon State alumnus Roger Stearns remembers that meeting against the rival Ducks fondly, especially the noise coming from those fans at Autzen Stadium.

“You could literally feel the energy in the stadium,” Stearns said. “It was my first time at this rivalry game, and it was just as exciting as everybody made it out to be.”

Both teams came into this rivalry matchup shorthanded.  The Beavers’ star running back Yvenson Bernard was sidelined with an injury, as was Oregon’s starting quarterback Dennis Dixon.

But in a battle of teams with injured stars, the Beavers came storming out of the gate, scoring on their opening drive with a 37-yard rushing touchdown from backup running back Matt Sieverson. Oregon followed suit a few possessions later, and tied the game with 4:03 to play in the first quarter.

From there, the game became a back-and-forth battle through the first half that would set the tone for the rest of the meeting. Oregon State regained the lead on the following drive, and later extended that lead with a 27-yard pick-six from senior outside linebacker Darrell Doggett.  The Ducks responded with 1:13 remaining in the second quarter, and then tied it up with a 25-yard scoop-and-score.

Between a series of defensive touchdowns from both teams and a long touchdown drive from each offense, the game went into halftime tied at 21, much to the worry of Stearns.

“We had lost momentum going into halftime, and we weren’t feeling too good at that point,” said Stearns.  “That being said, we knew that anything could happen.”

The Ducks were able to maintain the momentum they had built from consecutive touchdowns at the end of the first half, taking a 28-21 lead midway through the third quarter.  Both defenses held the other team scoreless for a bit, until the Beavers tied it up on a designed run by sophomore quarterback Lyle Moevao with 14:49 left in the fourth quarter.

With the game tied once again, this meeting between the two rivals was beginning to show the signs of a game coming down to the final minutes. And on Oregon State’s final drive of the second half, that last-second victory was looking like it would go to the Beavers. With 1:09 left in the fourth quarter, Oregon State drove down to the Ducks’ 17-yard line and set up for a 35-yard go-ahead field goal.

With Lou Groza award winner Alexis Serna lining up for that potential game winning kick for Oregon State, Serna and the Beavers’ sideline were feeling good about their chances.

“I felt pretty confident going into that kick,” Serna said. “It was exciting to think that this was gonna happen, that I was gonna hit the game-winning field goal against Oregon two years in a row.”

Instead, Serna saw his kick end up blocked, and Oregon began marching down the field, trying to get in range to set up a game-winning field goal of their own.

With less than 20 seconds to play in the fourth quarter, and Oregon still in possession of the ball, disaster struck for the home team.  The Ducks chose to intentionally center the ball to the middle of the field to set up a 40-yard field goal which would have won the game– with no time outs remaining.

Oregon’s field goal team was rushed onto the field without the help of any timeouts, leaving the Ducks without the time needed for Oregon kicker Matt Evensen to properly set up for the attempted the game-winning kick. Evensen missed the attempt short, and the game was sent to overtime.

Nicholas Marshall, a Ducks fan and current student at the University of Oregon, still questions how the Ducks chose to approach that final play of the fourth quarter.

“They should’ve left their offense on the field and spiked it,” Marshall said.  “They had enough downs to do that, and it probably would’ve won the game.”

The Ducks moved the ball inside the ten on their first possession of overtime, but the Beavers defense came up with a stop before Oregon could reach the end zone. After a 27-yard field goal from Matt Evensen, the pressure shifted to Oregon State. They needed a field goal to keep the game alive.

Similar to Oregon’s possession in the first overtime, the Beavers’ offense stalled, and picked up one yard on three plays.  All eyes turned to Serna, who was given the task of sending the game to a second overtime with a 41-yard field goal.

“It never once crossed my mind that I wouldn’t make the kick,” Serna said.  “I felt confident, and I was focused on just going out there and putting it through the uprights.”

Serna lived up to his confidence, and split the uprights on a kick with enough power to spare. Oregon State Head Coach Mike Riley gave a nod of approval on the sideline, followed by a slight grin, knowing that the game was not yet over.

On the first play of the second overtime, the Beavers got the ball and handed it to true freshman wide receiver James Rodgers on a fly sweep.  After breaking a tackle behind the line of scrimmage, Rodgers caught the corner and sprinted down the sideline for a touchdown. Autzen Stadium fell silent.

“The life was sucked out of that place,” said Marshall.  “We were so close to winning it in regulation, and now here we were needing a touchdown to extend the game.”

Oregon continued to struggle on offense in the second overtime period, facing a fourth-and-1 from the 16-yard line.  As Duck fans held their breath, the noise from the visiting section in the southwest end of the stadium began to fill the air.  Oregon offensive coordinator Chip Kelly held his head in one hand.

Needing one yard, Oregon quarterback Justin Roper took the snap and handed off to star running back Jonathan Stewart, who fell short of the line to gain.  Once again, the Oregon State visitors crowd erupted, and the rest of the team came storming onto the field.  For the first time in fourteen years, the Beavers had won in Eugene.

“Anytime you beat your rival, it’s always awesome,” Serna said.  “There are definitely moments today where I still think about that game.