The Daily Barometer • May 15, 2022 • https://dailybaro.orangemedianetwork.com/16781/daily-barometer-news/osu-corvallis-join-nationwide-movement-in-response-to-leaked-decision-about-roe-v-wade/ 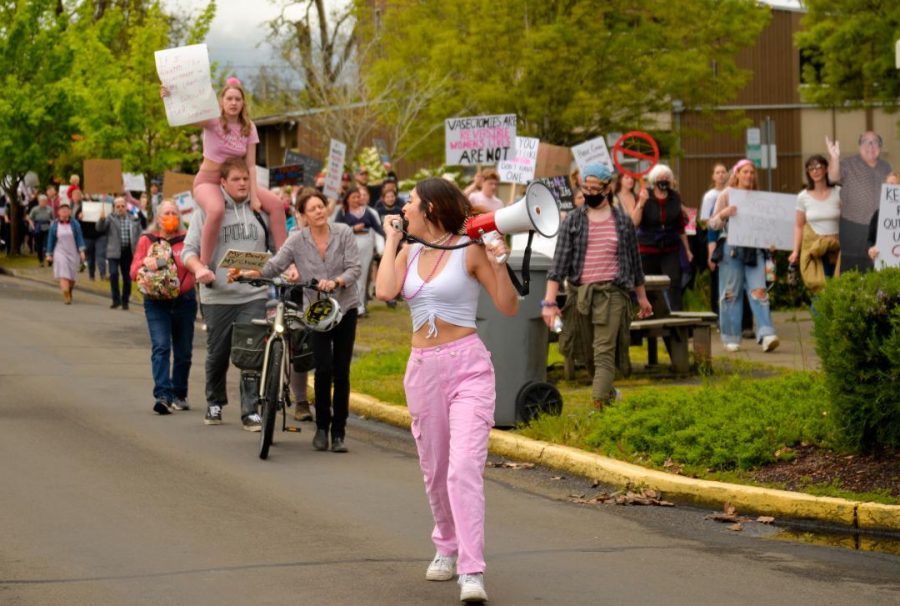 Perla Nieto (center), a student at Oregon State University, carries a megaphone and shouts pro choice chants on May 14 as the crowd marches toward the Corvallis City Hall in Corvallis, Ore. Nieto and fellow organizers created this event so that students of OSU and residents of Corvallis would be able to participate in some capacity with this nationwide protest for reproductive rights.

Dressed in pink attire, more than 260 people marched on May 14 for reproductive rights from the Oregon State University campus in Corvallis, Ore. to the Corvallis City Hall.

The “Bans Off Our Bodies” march was a nationwide movement that, in Corvallis, was organized by Amelia Schantz, Perla Nieto, Megan Le and Liz Babcock. The march started at the Memorial Union on OSU’s campus before moving to the city hall downtown.

“A lot of women feel like their rights are being taken away,” said Jackie Stilwell, one of the protestors who attended the march. “This makes me feel like society wants women to stay in the kitchen to raise the children which we aren’t going to do. I want to be someone who’s strong in the business.”

Attendees carried signs with phrases such as “Seriously? My mom already marched for this” and shouted chants like “Hey, hey, ho, ho. Abortion ban has got to go!”

When the marchers arrived at the Corvallis City Hall, the hosts invited attendees to tell stories about their personal and their friends’ experiences with Roe v Wade through the megaphones.

Carter, an attendee whose last name was not available, talked about contraceptive access for people who do not identify as women that have uteruses, such as black and brown trans-people, non-binary, and queer people.

“[They] are not allowed in because they do not identify as women,” Carter said. “This is all of our fights, not just one community… it’s everyone’s fight like we’ve been saying all day long.”

One of the organizers of the event said Roe v Wade granted every woman in the nation the rights over their own body and reproductive rights in 1973. They said if Roe v Wade gets overturned this year, at least 25 states will likely ban abortion, and 13 of them may do it immediately.

“Thousands of women die every year from pregnancy complications,” the speaker said. “But I want to shed light on the fact that Black women are three times as likely as white women to die from pregnancy-related causes, according to CDC data.”

“2,000 mules” is an American political film by Dinesh D’Souza that shows how the 2020 elections were allegedly rigged and stolen from former President Donald Trump.

“These people have done a lot to put this thing together,” said George Beekman, one of the attendees of the protest. “They should have a right to speak without being shouted down by a person who is shouting the same things over and over again.”

According to Babcock, they’ve talked in a group chat together since May 9 to organize this march. Babcock said she designed the flyers and created the Facebook event.

Schantz said, on the day she found out about the leaked decision about Roe v Wade, she was not able to do any school work because she felt so angry and sad.

Schantz said she and Nieto had attended an earlier protest at the city hall regarding women’s abortion rights.

After about an hour at city hall, the march returned back to the MU at OSU.

“Whatever is next, we will be there fighting. Loud and proud,” Stilwell said.