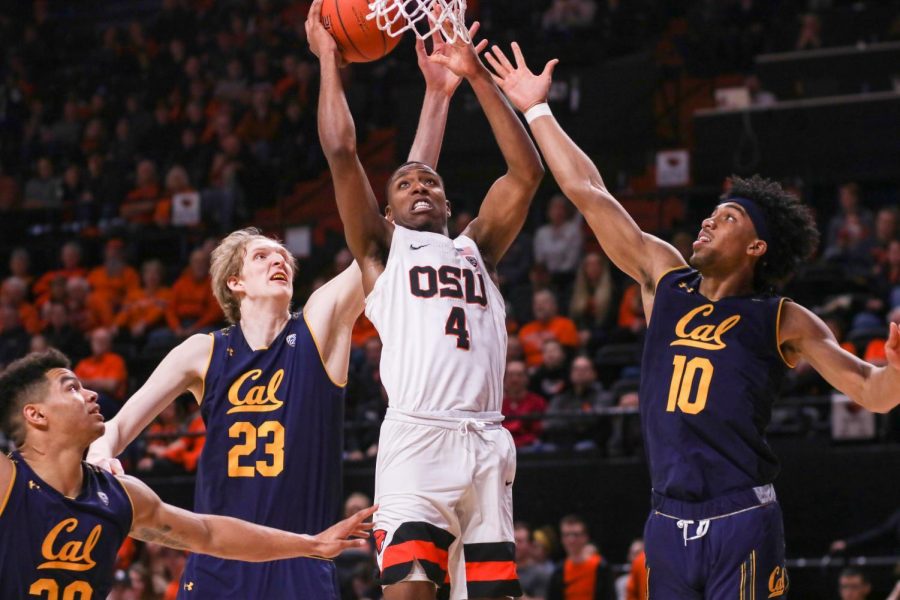 In this file photo from Feb. 1, 2020, OSU forward Alfred Hollins (#4) goes up for a shot while California forwards Connor Vanover (#23) and Justice Sueing (#10) go up for the block in Gill Coliseum on Feb. 9, 2019. Hollins scored 14 points in the second half while playing against California. In their meeting in the 2020 season, the Beavers came out on top against the Golden Bears.

Oregon State Men’s Basketball back into action against Golden Bears

Oregon State played several of the members from their 2020 recruiting class during their season debut on Nov. 25 against the California Golden Bears, holding off the PAC-12 opponent for a 71-63 win at Gill Coliseum.

The Beavers had a small lead going into the second half, leading Cal 36-31 after shooting 50% from the field through the first 20 minutes of play.

Oregon State furthered their lead to as much as 14 points midway through the second half, but the Golden Bears retaliated narrowing the score to 67-62 with 1:38 remaining. Yet, the Beavers were able to extend their lead to eight and hold on for the win, thanks in part to a series of free throws in the final minutes.

Senior guard Ethan Thompson had a strong night for Oregon State, ending with 15 points and six assists for the Beavers. Junior forward Warith Alatishe led the way for the orange and black in scoring, ending his first game with Oregon State with 16 points and eight more rebounds.

This is the second time the Beavers have scored over 100 points during Head Coach Wayne Tinkle’s seven-year tenure. Reaching that 100-point mark took a team effort, with senior guard Ethan Thompson and six other Beavers scoring in the double digits.

The Beavers trailed 5-4 early in the game, but turned the tides with a 37-2 scoring stretch to extend the lead 41-7. By halftime, the Beavers led Northwest 57-15.

Oregon State’s scoring barrage came with some high efficiency from the floor. By the end of the night, the Beavers shot 66% overall and 55% from three-point range.

Oregon State will return to action Wednesday, Dec. 2 at 7 p.m. as they take on the Washington State Cougars for their first home game of the 2020 season.

The Oregon State Men were not the only basketball team in Corvallis to open their season with a win, as Beavers’ Women’s Basketball came out on top against Montana Western 88-54 on Nov. 28.

Oregon State Women’s Basketball had not lost a season opener since Head Coach Scott Rueck took control of the program in 2010, with the Beavers’ win on Saturday extending the opening week winning streak to 11 games, despite a slow start in the first two quarters.

After going into the halftime break leading by four points, Oregon State opened up the third quarter on a hot streak, outsourcing Montana Western 30-9 and eventually putting the game out of reach, thanks in part to a team-high 24 points from sophomore forward Taylor Jones.

The Beavers will get their chance to build a winning streak on Monday, Nov. 30 when Oregon State takes on Carroll College in Gill Coliseum.