The Daily Barometer • May 20, 2022 • https://dailybaro.orangemedianetwork.com/16811/daily-barometer-news/board-of-trustees-announces-osu-presidential-finalist-candidates/ 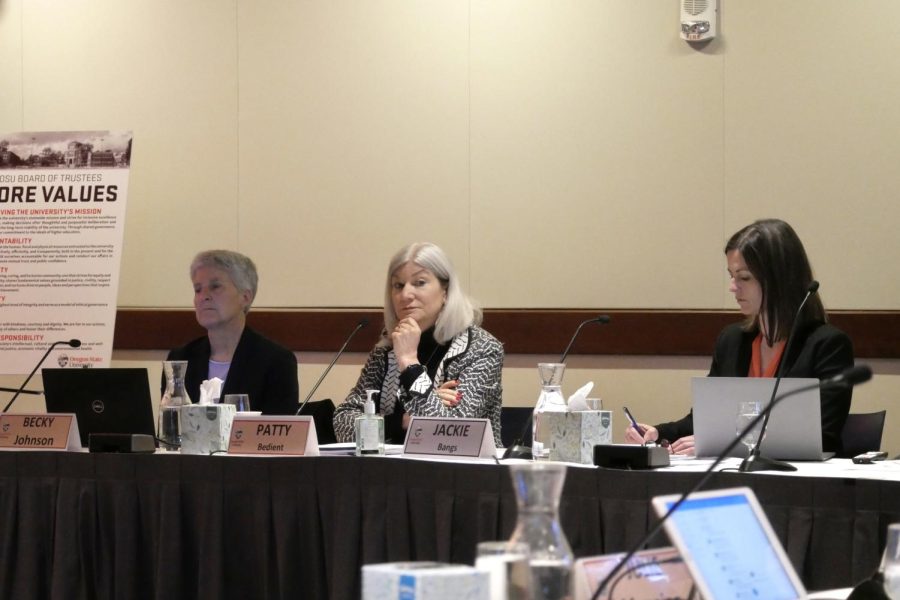 Oregon State University Interim President Rebecca Johnson sits alongside VP Patricia Bedient at a Board of Trustees meeting in the Memorial Union Horizon Room on April 8 that discussed tuition increases. Johnson has served as the interim president at OSU since former President F. King Alexander resigned last spring, but the board announced on May 20 the two finalist candidates for the next OSU president.

Oregon State University’s Board of Trustees announced the finalists for the university’s next president in a public meeting on May 20. Community members can meet both finalists in forums happening early next week.

According to Schueler, public forums will be held on May 23 and May 24 for members of the community to meet with and discuss the finalists. The forums, which will be held in person and streamed live, will be recorded for viewing later on the presidential search website.

According to the presidential search webpage, the university’s next president is anticipated to be selected in early June.

After announcing the presidential finalists, the board moved on to discussing whether or not OSU will reimburse the finalists for the reasonable cost of travel to OSU.

“Those expenses would include amounts allowable under OSU’s travel policy, which may include airfare, car rental, hotel and incidentals like airport parking,” Schueler said.

The board decided unanimously to reimburse the finalists for the cost of travel.

Additionally, the board discussed reimbursing presidential finalists a reasonable amount to engage legal and financial advisors throughout the discussions.

Schueler then opened the floor for questions and comments from members of the board or public.

“I think it is important for us and actually protects us as well moving forward,” said Patricia Bedient, vice chair of the Board of Trustees. “We do want them to have reasonable legal counsel to make sure that we can arrive at an agreement with whomever the person is that we ultimately select.”

The board decided unanimously to reimburse the finalists up to $5,000 for legal and financial advisors.

“I think the campus is going to be excited to hear from [the finalists] and hear about them, what their experiences are and what their visions are for the future of Oregon State,” Schueler said.