The Daily Barometer • May 21, 2022 • https://dailybaro.orangemedianetwork.com/16816/daily-barometer-sports/beaver-baseball-drops-second-game-to-ucla-bruins-friday-night/ 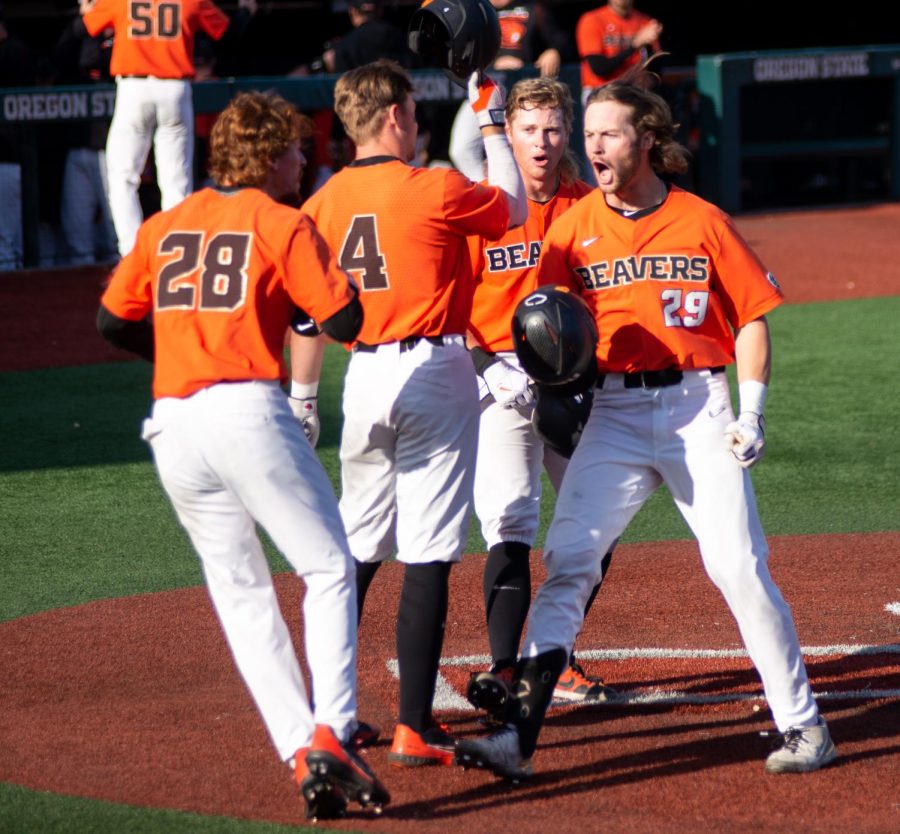 The Oregon State baseball team celebrating after Oregon State junior infielder Jacob Melton's home-run against the UCLA Bruins on May 20 at Goss Stadium. The Beavers would lose the game by a score of 7-4, and dropped to an overall record of 40-13

After losing the first game of the series against the UCLA Bruins with a score of 4-1, the Beavers looked to salvage the series Friday night as the second game took place at Goss Stadium, which was packed with over 4,000 fans in attendance.

Like the first game, trouble began for the Beavers right in the top of the first inning as UCLA’s graduate student Jake Palmer doubled down the 3rd base line and reached 2nd base. Junior Michael Curialle then flied out to center field but helped Palmer advance to third. And off a wild pitch with batter Ethan Gourson, Palmer was able to score 1 point for the Bruins.

However, OSU’s lead did not last long. In the top of the 2nd, UCLA’s Junior John Hahn walked, followed by graduate student Kenny Oyama singling to right center field and advancing Hahn to third base. Sophomore Carson Yates then homered to left center, bringing him, Oyama, and Hanh home. The Beavers were now down by a run.

The bottom of the third brought the score to a tie of 4-4 as sophomore Justin Boyd homered to left field.

The top of the sixth inning came with UCLA reclaiming the lead as Oyama 1st singling to center field, then advancing to 2nd on a wild pitch. Palmer then singled through the left side and gained an RBI single as Oyama scored, bringing the score to 5-4.

The Bruins weren’t done there as Palmer, being hit by a pitch by Oregon State  redshirt-senior pitcher Mitchell Verburg, walked in the top of the ninth inning.  Curialle then singled to center field and helped advance Palmer to third base. Gourson also singled up the middle and gained an RBI as he brought Palmer home. Junior Jared Karros then doubled to left center field and gained an RBI as Curialle scored and Gourson advanced to 3rd.

That inning, along with the game, ended with a final score of 7-4, giving the Bruins the clinch of the series they need to secure the #1 seed spot for the PAC-12 championship.

Follow along for the last game of this series and of the regular season on Saturday at 12 p.m.