The Daily Barometer • May 26, 2022 • https://dailybaro.orangemedianetwork.com/16841/daily-barometer-news/juneteenth-marks-second-year-of-recognition-and-celebration-at-osu/

Juneteenth marks second year of recognition and celebration at OSU 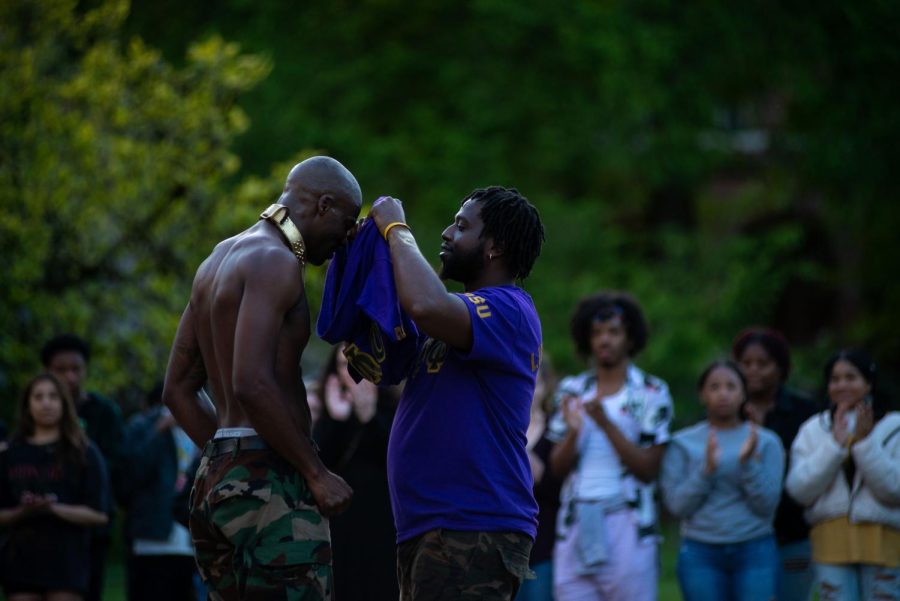 Omega Psi Phi inductee Adigun “Ωba” McLeod, officially becomes a brother as OPP brother Le'Waski Watkins puts on the Psi Phi colors on Mcleod during the OSU Probate in the Memorial Union Quad on May 20. Omega Psi Phi is part of the National Pan-Hellenic Council, or Divine Nine, which will be performing during the Lonnie B. Harris Black Cultural Center block party on June 1.

The Lonnie B. Harris Black Cultural Center has celebrated Juneteenth for many years but celebrations this year will be held in-person as a community block party.

The BCC plans to hold a block party with food, music, Black vendors and performances from the Divine Nine on June 1 from 5 to 8 p.m. The Divine Nine comprises the nine historically African-American, international fraternities and sororities, or the National Pan-Hellenic Council. This block party will honor the holiday’s second year of federal recognition.

The event is largely student-run by those on the committee and has been in preparation since the fall, according to Quentin Onyemordi, BCC leadership liaison.

Even with the shift in director at the BCC, as Acting BCC Director Cassady Gilroy took over for former director Terrance Harris, who left on April 15, Onyemordi said the students are ready to execute a great celebration.

According to Gilroy, who is also the operations manager for Diversity and Cultural Engagement, Juneteenth comes from the date of June 19, 1865, when slaves in Galveston, TX were finally freed, two years after the Emancipation Proclamation was signed into action in 1863.

Texas made Juneteenth a state holiday in 1980 with a few other states following suit. The state of Oregon and OSU, however, passed House Bill 2168 in June 2021 to recognize Juneteenth as an official state holiday beginning in 2022. OSU officially recognized Juneteenth as a university holiday for the first time on June 18, 2021, after the Oregon House of Representatives approved HB 2168.

Gilroy said the recognition of this holiday signifies OSU’s and the government’s efforts to affirm the history, struggles and experiences of African Americans and address systemic racism.

“This is the lived experiences of Black and African Americans; it is not new to them,” Gilroy said. “So having a day to be able to intentionally reflect on this holiday and its significance, regardless of your personal identity or affinity, is important, and seeing the calls from OSU leadership to do this work, it matters a lot.”

“It reminds me of Maya Angelou’s poem, “Still I Rise,” where she states, ‘Out of the huts of history’s shame, I rise. Up from a past that’s rooted in pain, I rise’,” Dougherty said.

According to Gilroy, Junteeth’s recognition by the university is not an end-all solution, and he calls on everyone to take responsibility to fulfill stated commitments through action.

For Onyemordi, he has been observing Juneteenth from a young age and said he would have continued to do so regardless of the national recognition.

“I am glad people outside of just the Black community are now given the opportunity to understand how important a day Juneteenth is and why we hold it dear to our hearts over 100 years later,” Onyemordi said.

Gilroy said he thanks the various individuals at the BCC and community members for all of their work on the event, which doubles as an end-of-the-year celebration.

“It is truly special to see so many folks be more than willing to step up and ensure that the BCC continues to be a place of community, support and continued resource-building for Black and African American students on this campus,” Gilroy said. “The success and retention of our Black students is vital and not something we are willing to let fade.”