The Beavers come up short of first 2020 win, despite strong effort in all three phases 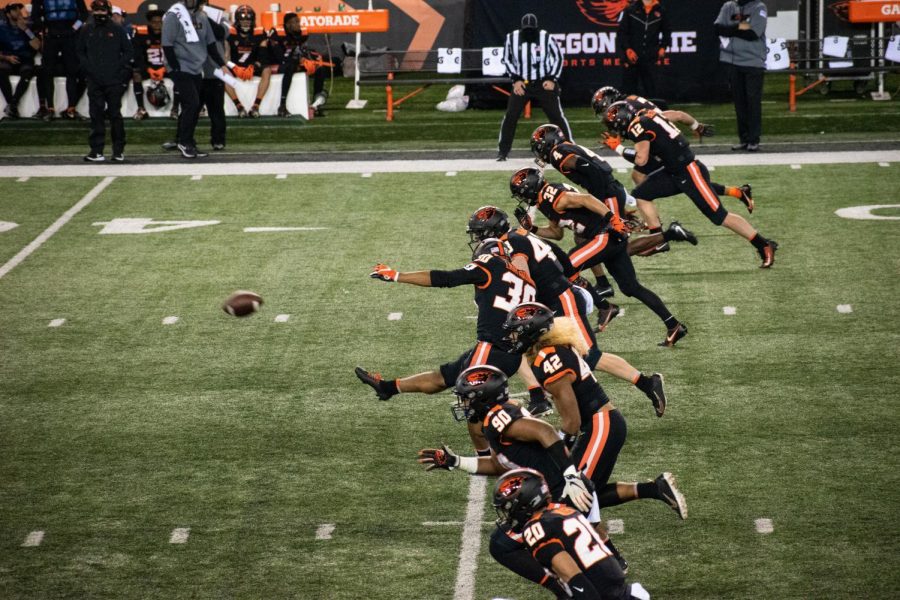 It was a cold, rainy, and windy night, yet energy from both sidelines was at a high as the Oregon State Beavers traveled to Seattle to take on the Washington Huskies in their second game of the season.

Both teams went into their Nov. 14 meeting with the same goal of getting their first win of the year, and while Washington would eventually come away with the victory, the Beavers’ were able to use a hot start on defense and special teams to strike first and take a lead for the first time in 2020.

After forcing the Huskies to punt on their first possession of the game, Oregon State found the end zone in the early minutes of the opening quarter after redshirt junior Jaydon Grant returned a blocked Washington punt for a touchdown. The Beavers’ special teams fireworks were caused in part by an errant snap launched over the head of Huskies’ punter Race Porter, and a deflection on Porter’s last-second effort to kick the ball away by redshirt senior Hamilcar Rashed Jr.

Head Coach Jonathan Smith was pleased with the special teams drawing first blood, and gave praise to redshirt senior wide receiver Trevon Bradford for his effort. Bradford began the play further away from the ball than anyone as the designated punt returner, but raced from his spot to the opposite end of the field to get a block that would help Grant reach the end zone.

“It was huge,” Smith said. “It was an awesome effort by Bradford from one end of the field to the other, and that was a big play to start the game.”

Oregon State would go on to score two more touchdowns on the night, both of them coming from the ground game and both of them coming in the second quarter. Redshirt junior running back B.J. Baylor was the first player from the Beavers’ offense to find the end zone, while junior running back Jermar Jefferson would join him with a rushing touchdown of his own with 18 seconds remaining in the quarter.

Despite the effort from Oregon State’s two running backs, the Beavers fell short in the game, losing by a score of 27-21, moving them to 0-2 with only five games remaining in the 2020 regular-season. To match their win total from last year, Oregon State will need to win the remainder of their currently scheduled games, and will need to win four of their remaining five to earn the program’s first regular-season winning record since 2012.

To help turn the season around, the Beavers will need more consistent play from their redshirt junior quarterback Tristan Gebbia, who struggled against the Huskies, completing 11 of his 24 passing attempts for a total of 85 yards.

Gebbia’s rough night was a step back for a quarterback who played well in his season debut against Washington State, where the junior threw for 329 yards and a touchdown, all while completing 71% of his passes.

When asked about Gebbia’s performance, Smith gave credit where credit was due, saying that the Huskies’ secondary was ready to play.

“That’s a good secondary over there,” Smith said. “They got a few pass-rushes on him, they made it difficult.”

Smith also made sure to note that he does not view the offense as one-dimensional, rather, running the ball allows the opportunity for more plays to open up.

“We’re into running the ball because I do believe that it sets up a lot of what we want to do offensively,” Smith said. “I don’t think we’re one-dimensional, but we’re really good at running the ball.”

One of the most critical moments of the game came early in the fourth quarter, when Oregon State needed a boost from that running game. The score was 24-21, and the Beavers were within the Huskies’ 5-yard line. Jefferson ran the ball on a third-and-1, which the officials deemed to be short of the first down. Jefferson then attempted to run the ball again on fourth down, but again, the official deemed that Jefferson did not convert, which allowed the Huskies to take over with a fresh set of downs.

Oregon State coaches and players, from the sideline to the members on the field, were convinced that Jefferson had reached the first down– even Jefferson himself.

So sure that Jefferson had reached the first down after the running back’s third-down attempt, Smith began preparing to call a play that they would run on first down, but quickly had to change mindsets.

“My angle on the third-down call, I thought we had it,” Smith said. “We were beginning to talk about first down, and then the chains came out, and obviously we had to be prepared for either way it went.”

Despite Washington regaining possession of the ball on the fourth-down stop, the Beavers’ defense was able to hold down the Huskies, keeping the Washington lead to one score all the way until through the second half.

After allowing the Huskies to score 24 points through the first two quarters, Oregon State’s defense came out strong in the second half and allowed only a field goal the rest of the way. Junior defensive lineman Issac Hodgins, who recorded 8 tackles on the night and helped lead the way for that second-half resurgence, was happy with the performance but said that there is still work to be done.

“I think it comes down to tackling,” Hodgins said. “It’s nothing special that they did. We just gotta be in the right place at the right time. We’re there to make plays, we just got to make them.”

The loss to the Huskies, Oregon State’s ninth consecutive loss to Washington, sets the Beavers back to 0-2 on the season– but Smith believes that he and his team are ready to put the loss behind them, and focus on the rest of the season. Even in defeat, the coach found positives in all three units of the team. But he is not satisfied just yet.

“I thought it was gritty. It was not perfect by any stretch,” Smith said. “[There’s] things to clean up in all three phases. But I do appreciate the heart and the competitiveness of this team. Defense coming up in the second half with some stops, holding them to three points, keeping us in the game. I think we gotta continue to work and improve. I think we’ve got a lot of good players on this team, I think we’ve got [an] opportunity to win a lot of games, but obviously, we have to get our first one here. And the only way we’re going to do that is we go back to work and improve.”

The Beavers will return to Reser Stadium on Nov. 21, where they will face off against the California Golden Bears. Kickoff is slated for 12:30 p.m.