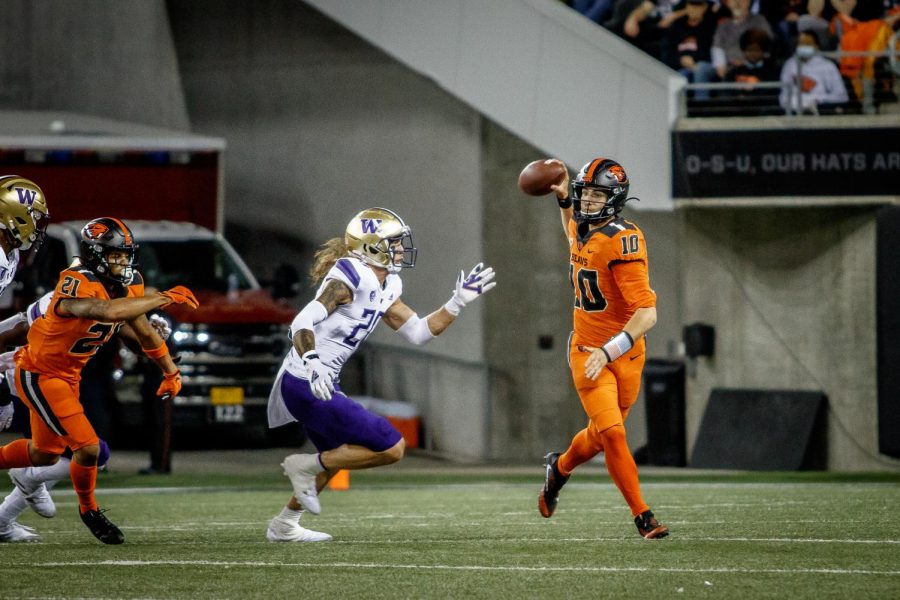 Redshirt-sophomore quarterback Chance Nolan looking for an open reciever down the field. Nolan finished the game going 7-15 for 48 yards and 1 interception.

The college football season is a tradition like any other and with fall training camp just around the corner. The anticipation grows for Beaver Football’s return inside a half empty Reser Stadium, which is undergoing renovations this year.

Although it’s not quite football season just yet, it doesn’t mean that I can’t talk about the team headed into next season. I want to focus on the quarterback position specifically and whether current starting quarterback Chance Nolan retains his starting job when the Beavers welcome the Boise State Broncos to Reser Stadium on Sept. 3.

I’m sure by now everyone is familiar with the quarterbacks on the football roster, outside of Nolan but if not, I’ll do a quick run through of the others at the position. The quarterback room behind Nolan also includes Tristian Gebbia, Ben Gulbranson, Jake Blair, and Travis Throckmorton. However, I’m just going to focus on Gebbia and Gulbranson who have had in-game experience, as Blair and Throckmorton haven’t played a snap yet for the Beavers.

Gebbia was the starter for the Beavers in the shortened 2020 football season, but was injured in the rivalry game against Oregon and was replaced by Nolan, who finished the game and secured the win for Oregon State. The Beavers finished the 202o season with a record of 2-5.

Gulbranson also saw action in the 2020 season and made his debut appearance in the final game of the season against Arizona State but did not see the field this past season due to a shoulder injury sustained during spring practices prior to the start of the 2021 football season.

As a result of being down two quarterbacks to injury, Head Football Coach Jonathan Smith went to the transfer portal to bring in a veteran quarterback to the room and brought in senior Sam Noyer from the University of Colorado Boulder to bring stability and starting experience to the position.

Noyer was named the starter for the opener against Purdue after fall camp concluded and Nolan, who had started a few games in 2020, was named the backup to Noyer. However, Noyer’s tenure as a starter would be short lived at Oregon State as he was replaced by Nolan in the second half of the game against Purdue to try and spark a comeback down 16-7 in the third quarter.

Nolan would almost complete the comeback for the Beavers but fall just short in the season opener.  After the season opener, Nolan ran away with the starting job leading the Beavers finishing with an overall record of 7-6 on the year, which secured a bowl game appearance their first in eight years, and a 6-0 record at home.

During the season, Nolan was consistently throwing for around 200-yards a game as a starter except for three games where the running game was the main focal point of the offense. The Beavers this past season had one of the best rushing offenses in the nation and as a result there were times where Nolan wasn’t throwing a lot during a game.

I heard a lot of criticism about this, but I was fine with running the ball most of the game if an opponent could not stop the Beavers from running the ball. Even if they did, Nolan would pick apart a defense using his ability as a dual-threat quarterback to extend plays to keep offensive drives alive.

Looking back on this season and Nolan’s play under center, it was a good season when you consider that it was his first full year starting for the Beavers, which he also had some growing pains this year as a starter.

Although he struggled at times in the season, Nolan will only get better with another year and offseason in the offense. I personally feel that he’s the best option as the starter and all signs during spring practices point to him securing the job for when fall camp rolls around.

Gebbia and Gulbranson are shaking off rust after not playing for more than a year after coming back from injury.  They also haven’t shown any massive leaps in practice to separate themselves from Nolan, who has made improvements in his accuracy from last season during spring practices.

The starting job appears to be Nolan’s to lose even though Smith hasn’t named a starter yet, which is his way of handling the position. However, Nolan gives the Beavers more options to win as a starter and for that reason I am ready to let Chance cook for the 2022 season.